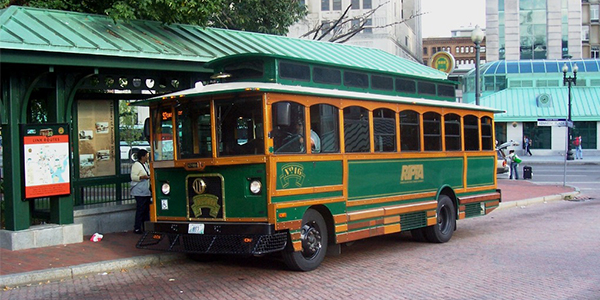 Optima Bus Corp. is a company with one foot in the past, but the other one firmly planted in the 21st century.This innovative, Kansas-based company is leading that charge as America’s cities and towns rediscover the trolley that dominated mass transit at the turn of the 20th century. Optima’s American Heritage Trolley, with its hand-finished Philippine mahogany seats and trim, oversized windows, spiraled brass stanchions and trademark bell, combines the classic look from the trolley’s heyday with ultramodern durability and features.

In terms of its look and feel, Optima’s new Opus Low-Floor Bus is the futuristic bookend to the classic style of the company’s well-known trolley. The Opus model has a sleek and roomy look for the new millennium, gets world-class fuel efficiency, and is engineered to allow urban transit agencies to operate routes that were once off-limits to bulkier buses.
“When you’re the new kid on the block, you can design all kinds of new features that the industry is not used to seeing in low-floor buses,” said Optima CEO Michael Monteferrante. He said that includes a state-of-the-art, ergonomic station for the driver and roof-mounted air conditioning units that make it possible for an oversized rear window. “It has new features like interior coloring and lighting that is very bright as opposed to the dark and gloomy look of traditional buses,” he added.

Tackling Utah’s winter
The Opus has helped Optima, which until 2001 was known as Chance Coach, expand its reach of bus and trolley customers into 48 of the 50 states, in 164 cities. In recent months, Optima has announced a number of new orders, such as the 33 Opus buses the Wichita, Kan., company is in the process of delivering to the Utah Transit Authority (UTA) in Salt Lake City.

“We were impressed that the folks at Optima went out of their way to accommodate our technical requirements related to our harsh winters and high altitude,” said UTA fleet engineer Doug Woodbury. “They made sure our Opus buses will have extra protection against the road salt we use each winter and to ensure the Opus engine will deliver optimum performance at Utah’s high altitude.”

The high-tech success for Optima Bus is a remarkable twist for a company with unique roots in Americana. The firm is a spin-off from Chance Industries, which was founded in 1978 and is now one of the nation’s leading makers of amusement park rides, such as the miniature steam locomotives that are a popular attraction in many theme parks.

In 1976, Chance Industries bought Minibus Inc., and created Chance Coach. Said Monteferrante, “They wanted to diversify because of the cyclical nature of the business, carnival rides were always down in the summer and golden in the winter as they were getting ready for the next season.” Because some of its theme park customers were looking at trolley type vehicles for shuttling customers, the firm introduced its popular Alamo City Streetcar in 1982, which became the company’s trademark product.
In 1998, the parent company sold Chance Coach to the publicly traded American Capital Strategies out of Maryland. The new owners brought in Monteferrante, a well-known turnaround specialist in the transit industry, and in 2003 changed the name to Optima Bus to reflect the new focus.

Reaching smaller neighborhoods
The owners also looked toward Europe, where mass transit has traditionally been more popular than in America, to pick some innovative ideas for the new direction of the company. It entered into an agreement with Wright Expotech, an Irish company, to develop Opus buses.

The key to the success of Opus has been that U.S. transit agencies, after an era of buying oversized buses aimed at consolidating routes, realized they needed to change their strategy to operate both in dense urban neighborhoods with narrower streets and in scattered, more exurban areas, the places where many potential new customers live.
When the heavy-duty Opus model was introduced, former APTA President and Long Beach Transit President and General Manager Larry Jackson called it “the bus America has been waiting for.”

“Bigger cities now need smaller buses to get into those almost rural neighborhoods and get people into the city,” Monteferrante said. “In the past, the larger buses could not maneuver efficiently through the neighborhood and the Opus is offered in both 29-foot and 34-foot lengths.”

The results of some of the smarter transit operations is that ridership, for the first time in a generation, is beginning to increase. “The buses are now cleaner and their routes are more efficient – it’s a testimony to urban planning,” said the Optima CEO. “And we’re seeing a higher demand for cleaner fuel” which includes low-sulfur diesel, liquefied natural gas, or LNG, and hybrid electric models.

In February, Optima announced the development of a hybrid-electric powered version of the Opus model that is expected to deliver as much as 50 percent savings in fuel over the operational costs of traditionally powered buses. The first prototype of the hybrid-electric Opus will debut at the APTA’s International Public Transportation Expo in Dallas, Texas, Sept. 26-28, 2005, at the ISE Corporation’s booth #3135. Company officials believe that the hybrid version could account for 40 percent of the firm’s overall sales by as early as 2009.

The original fuel-efficient Opus has already made its mark in a number of cities across America. Last July, for example, the Corpus Christi Regional Transportation Authority in Texas received its third delivery of Opus models, bringing its fleet up to 28 buses. Monteferrante said the city of Austin Texas, has just received its order for 30 Opus buses. “They were starting a new light-rail system, and so they needed to build a feeder system that could bring people from their homes to the station and a smaller bus serves that task,” the CEO explained. Optima is also finalizing negotiations with Miami-Dade as the recommended bus manufacturer of the largest 30-foot bus procurement in transit history totaling 600 buses over five years.

Initially the new Opus created considerable start-up costs, but Monteferrante also made increasing productivity a major focus. The company changed the manufacturing process by maintaining a more balanced cycle of assembly line work and a work schedule with much greater accountability, bringing about a 30 percent decrease in labor costs.

Currently, Optima has more than 150 employees working in a relatively new building in Wichita. Monteferrante believes that number will grow along with the company. “The future of Optima is one of growth and product expansion,” he said.

And that’s good news for thousands of American riders who’ve been waiting for a bus – a bus like the Opus.