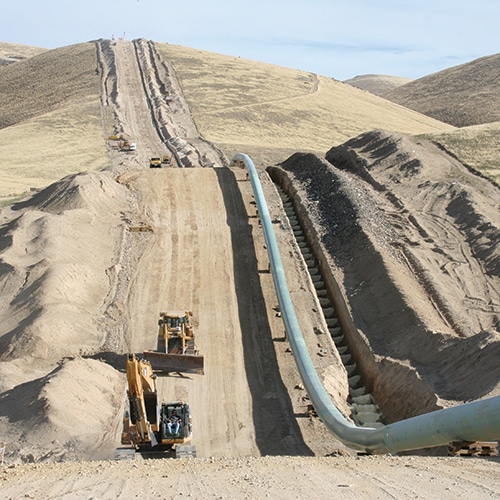 Clients include North American oil and gas industry corporations, the energy-producing organizations that sustain financial health. Where would we be without it, wonders Dan Harvey?

The future meets the past. Self-described as “the next generation” pipeline contractor, Precision Pipeline LLC provides access to energy-generating resources nearly as old as the world itself. The company provides state-of-the-art infrastructure for natural gas and petroleum pipelines.

Boasting extensive experience in the interstate pipeline industry – the company’s activities include the construction and maintenance of pipelines – Precision Pipeline has an enormous footprint throughout North America. Indeed, through its services, the company has helped establish an arterial network that metaphorically provides the blood flow that sustains that continent’s economy. While based in Eau Claire, Wis., Precision Pipeline has extended its reach in all compass directions. “In the past three years, we’ve accomplished about 900 miles of large diameter pipeline installation throughout the United States and Canada,” reports Andy Neuberger, the company’s estimator/project manager. “That’s a large amount of territory covered in a relatively short time.”

VIBRANT ENTERPRISE
Obviously, the company, which was established in 2004 by cofounders Dan Murphy and Steve Rooney, has enjoyed substantial growth. “As far as revenue, we’ve experienced about 60 percent growth each year since 2006,” says Neuberger, adding that the industry faces fluctuations, so revenue growth hasn’t exactly been a straightforward, continuously upward hot-air balloon ride to the sky. Market circumstances come into play. Look at recent years: In 2008, Precision Pipeline garnered $507 million of revenue and $93 million in EBITDA earnings. This was up from 2007 figures ($303 million of revenue and $37 million in EBITDA). However, the company witnessed a reduction of earnings in 2009 – in part due to the global economic downturn (which resulted in reduced natural gas and petroleum pipeline construction) and the market’s characteristic fluctuations. “In this industry, you can have a good year followed by a bad year,” says Neuberger.

But the industry levels itself – and that tendency translated in 60-percent growth in the past four years, Neuberger points out.

He adds that growth has been more impacted by the inherent nature of the industry than by recent economic catastrophe. “The nature of our market is cyclical,” Neuberger describes, “and the industry has been lucky in that the economic downturn didn’t affect us that much. The industry’s cyclical nature impacted us more, and cycles didn’t exactly match the overall performance of the global economy. As such, we have managed to do quite well while the rest of the world has faced some very difficult times.”

NATURAL RESOURCES
There’s another reason why Precision Pipeline has managed to dodge some of the flings and arrows of recent and outrageous economic fortunes, indicates Neuberger. And it has to do with the company’s natural resources – the co-founders and their employees. Murphy and Rooney designed the business so that it could efficiently and, in turn, successfully function in today’s pipeline industry parameters, Neuberger comments. “And those parameters can be quite stringent,” he adds. “But we’ve succeeded because we focus on cost efficiency, productivity and client-oriented business practices.”

However, the kind of agenda that Neuberger describes can’t be accomplished without the right people in place. “The people the founders surrounded themselves with have played an enormous part of our success. Employees are our biggest asset.”

During peak construction times, the company can employ as many as 2,000 people. However, Precision Pipeline has a core staff of capable individuals. “They’re relatively young but highly talented,” describes Neuberger. “The average age of our superintendents is about 45 years. Statistics reveal that that age is quite young. But our staff is very experienced.”

Essentially, Neuberger describes a mirror image of the company co-founders, and these co-founders couldn’t have found a better employee profile. Both Murphy and Rooney have been in the pipeline industry since they were about 16 years old. Between them, they possess about 50 years’ combined experience. Divide that between two and you have a pair of relatively young men that have accomplished much – through talent, determination and ambition.

Both Murphy and Rooney began as laborers and worked their way up through the pipeline construction industry. By the time he was 40 years old, Rooney became one of the industry’s best superintendents. He was also one of the industry superintendents capable of supervising pipeline projects in the northern United States that required frost road construction techniques, a talent that he brought into his company. “When it comes to winter construction, we’re very able,” says Neuberger. “Many of our projects in the north and the Midwest can only be accomplished in the winter months, and these take us into environments such as swamps. We’re probably the most experienced contractor that can work in such environments and climate conditions. Doing winter construction, with the resulting frost, is one our specialties. A lot of our work is in the Midwest, an area that witnesses freeze conditions.”

Murphy worked for one of the United States’ largest pipeline contractors as an estimator and project manager on compressor station projects. He then went on to work as a project manager and superintendent on various pipeline projects. During his career, he oversaw estimating, management, and environmental and safety compliance of projects. Further, he proved an innovator when it came to usage of new safety and cost cutting technologies. Now in business for themselves, and combining their considerable expertise, Rooney and Murphy cultivate their workforce members similar to the way that they were fine-tuned through experience.

NO PROJECT IS TOO COMPLEX
Since its founding in 2004, Precision Pipeline has worked on complex projects in every region of the country, and it has become a leading energy infrastructure services provider, specializing in the construction and maintenance of large diameter pipelines. The company excels at meeting the needs of pipeline owner companies by completing projects safely and with the lowest possible environmental impact to landowners’ properties.

“In each project, we prioritize safety and environment,” says Neuberger. “One reason why we’ve grown so much in just three years is our understanding and compliance with environmental laws and regulations, in both the United States and Canada.”

This should advance the company even further, as U.S. energy policies are moving toward cleaner, domestic energy sources. Precision Pipeline envisions itself as a leading player in the effort toward renewable energy and natural gas pipeline construction.

NO PROJECT TOO LARGE
Competitors probably view Precision Pipeline as something like an athlete on steroids. After all, growth has been remarkable and the projects it takes on are massive. Consider its recent activity: Precision Pipeline LLC was awarded a contract by El Paso Energy to relocate 2,600 feet of 24-inch pipeline in Westchester County, N.Y.

Precision Pipeline LLC was awarded a contract by Chief Oil & Gas for installation of four miles of 16-inch pipeline in Lycoming County in Pennsylvania.

Activities in the Keystone State underscore how Precision Pipeline has expanded its body and its activities.

“A significant amount of drilling is taking place in the Marcellus Shale, which takes in an area that includes Pennsylvania, New York and West Virginia,” says Neuberger. “We’ve managed to create a formidable presence in this region. We’ve opened up divisions in Waynesburg and Troy, in Pennsylvania, and these are supporting our growth, not just in the eastern section of the United States but our overall growth. Opportunities and subsequent activities push that growth.”

But it’s not just the new opportunities that fuel growth, it’s also the inherent nature of Precision Pipeline that propels the company forward.

“Every year, we stop and take a step back, just so that we can assess all of the aspects of our industry,” says Neuberger. “This assessment impacts all of the services that we provide – all related to pipeline construction – and it has allowed our company to evolve.”

Indeed, that’s the management approach: When things get busy, sometimes you need to stop, take a breath, look around and make sure that everything is working properly. It’s an approach valuable not only to a specific industry but also to any company that wants to succeed.

And as far as success, Precision Pipeline’s has been breathtaking.

Not bad for a company that is less than a decade old.