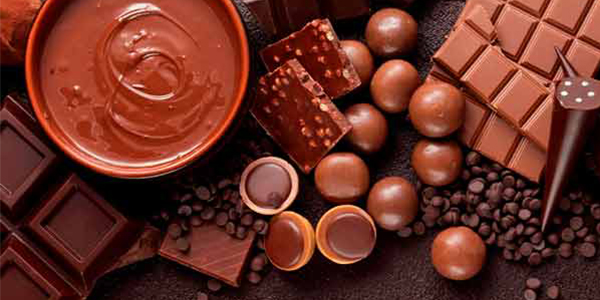 Mexican chocolate is almost as old as the people themselves. The Maya used stones to grind the cocoa by hand, and many of their small-scale, traditional production techniques and recipes remain with us to this day. But industrialization has brought whole new challenges to Mexico in general, and to chocolate producers in particular.

In examining the development of the Mexican chocolate industry, there are two key factors that one must take into account. The first is the rich chocolate-making tradition that has always been a part of Mexico’s culture. The second factor is of a historical-economic variety. On a larger scale, the history of Mexico’s chocolate industry illustrates many of the difficulties that confront a developing society as it tries to adapt itself to mass production.

In the early years of Mexican industrialization, both traditional and economic factors contributed to creating much consumer resistance to mass-produce chocolate. Knowing how to make chocolate in their own homes, people didn’t trust mass produced products. Indeed, because chocolate has always been a part of Mexican life, Mexican culinary tradition favored artesian methods of production.

These smaller shops go as far back as the 17th century, when there were, at least in Mexico City, several artesian chocolate shops. Some of those businesses found themselves with good opportunities for growth, and so introduced machinery and entered the industrial era.

After some time, the number of those early factories increased, even though the traditional small shops were still around as well, becoming just one more way to make chocolate. Distinguished among those artesian producers was the Enseñanza Nueva Convent.

But it wasn’t until the second half of the 19th century that chocolate’s industrial era really got underway in Mexico. The industry at that time included six factories and at least 54 artesian shops that still used stone grinders to crush the coco beans by hand.

The Mexican countryside wasn’t far behind the city, and its industrialization, although slower than that of Mexico City, also began to flourish. By the end of the 1870s, there were at least four chocolate factories outside Mexico City: La Concha, La Norma, La Flor – in Tabasco – and La Locomotora – in Jalapa, Veracruz.

The year 1920 is considered to be the beginning of what has become known as chocolate’s industrial revolution, since as of that moment, chocolate production, distribution, and sales began to grow precipitously. Cocoa, the raw primary material used to make chocolate, could only be obtained in the states of Tabasco and Chiapas, which produced 75 and 25 percent of the country’s cocoa, respectively. It was during that time – March 26, 1936, to be precise – that the Association of Chocolate and Sweets Manufacturers was founded, with the primary objective of obtaining cheap and competitive raw material for its members.

In the year 1973, the National Cocoa Commission was born, a decentralized entity that took charge of the commercialization of cocoa and convened monthly meetings in which were discussed production levels and the need for the industry to apply quotas. Extra chocolate was exported as raw material or a byproduct. At that same time the National Union of Cocoa producers of Tabasco (UNPC) was founded, which brought together all the state’s coco producers and created the Industrializadora de Cacao de Tabasco (Incatabsa), which during its time was the most modern facility in the country, with a milling capacity of more than 10,000 tons. It was the only one that could meet the demands of the country’s biggest consumers of cocoa.

But then the industry’s development suffered a setback. Not only were table chocolate and powdered chocolate placed under price controls, but the chocolate industry’s primary materials – cocoa through Conadeca, sugar through the state sugar company, and milk through CONASUPO – were meted out through a system of quotas, effectively quashing much chance of growth for the industry.

At that time, the Association worked hard to negotiate fair prices for its members.

The industry would soon receive some relief. During the term of Mexican President Carlos Salinas de Gortari (1988-1994) the Secretary of Commercial and Industrial Promotion eliminated the bodies that controlled basic products, leaving their acquisition to the free market of supply and demand and eliminating almost all the price controls that had done so much damage to the nation’s economy (and not just to the industrial sector).

There began to be competition from products brought in from abroad, and the chocolate industry soon found it necessary to modernize, with new products, packaging, and presentations. The only thing the industry hasn’t been able to modernize is the flavor of the chocolate. The rest of the world uses mixes of different kinds of cocoa, but we can only use domestically produced cocoa due to the fact that the import of other kinds of cocoa is more or less prohibited – one must pass through an impossible gauntlet of bureaucracy to be able to import raw material. Winning its members easier access to the importation of raw material like cocoa is a particularly important goal for the Association.

These are some of the new challenges the Mexican chocolate industry found itself confronting as it entered the globalized world. We have had to fight to eliminate price controls on table and powdered chocolate. We have negotiated contracts with the sugar mills since the deregulation, and as an association we’ve been involved in the negotiations of all the free trade agreements signed by our country. We’ve been involved in the creation of official and national norms, and we’ve worked with the appropriate authorities to stop contraband.

In terms of improving our industry’s competitiveness, we give training courses on subjects like the manufacturing of confectionary products and others related to our industrial sector. Over the years, our group has grown to become one of manufacturers, retailers, and suppliers that are all highly competitive, but that also mutually assists their fellow members when there are problems.

New challenges are surely ahead – for example, government officials have yet to acknowledge the seriousness of the threat of the Monilia mold to cocoa production. For over 70 years the association has been fighting these fights on behalf of its members, and it will continue to do so.

Noé Lecona has been the general manager of the Association of Chocolate and Sweets Manufacturers for 21 years. For information visit www.aschoco.org.mx.