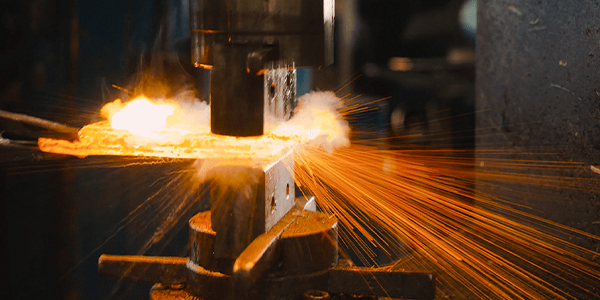 One can draw a certain parallel between the hot forging processes being employed by Louisville Forge and Gear and a North American market lacking adequate forging capacity – you’ve got to be able to handle the heat.

The company, which is 100-percent owned by the Japanese-based Aichi Steel Corp., and left the city that gave the company its name more than a decade ago so it could be closer to its largest customer, Toyota Motor Manufacturing North America, has been feverishly working to improve its efficiencies to support a rapidly growing demand for forged vehicle components.

Since moving, the company has overhauled its equipment, improved die making processes, eliminated less profitable products, all with one goal: “focus on supporting our key automotive customers with their high volume, highly engineered, engine and chassis components. We have shifted to become more specialized on complex, highly engineered, high volume automotive forgings, than we were in the past,” said Oliver Treilobs, the executive vice president of Louisville Forge. “We’re essentially shifting our focus to crankshafts, automotive steering knuckles and automotive connecting rods.”

Working around the clock
The strategy seems to be working quite well. In spite of soaring prices for its main commodity, steel, and increasing competition from overseas rivals, Louisville Forge has increased its labor force to some 450 people, who are now working around the clock in three shifts. In fact, Treilobs said that the work schedule is actually more intense than company executives would prefer.

“Typically in a forge shop, you like to limit production to two shifts, five days a week,” he explained. “Operating three shifts, six to seven days per week leaves too little time for preventive maintenance and doesn’t provide adequate rest for our team members. That’s why we’ve had to redefine the business priorities.”

Aichi Steel Works, Ltd. was founded in 1940, and its principal products include specialty steels, forged products, electronic and magnetic parts and machinery. The parent company employs more than 3,200 people.

In the early 1990s, not long after the new Toyota plant in Georgetown had opened up, Louisville Forge reached an agreement to provide in-line four-cylinder crankshafts for the Camry model. When the site of the company’s initial plant site in Louisville was needed for an airport expansion a few years later, the entire company relocated to Georgetown.

Embracing new technology
Key to the company’s growth has been the addition of crankshaft twisting technology employed for GM and Toyota V6 and V8 crankshafts. Press sizes range from a 700-metric-ton screw press to two giant 8,000-metric-ton National Presses. Louisville Forge is unique in that it operates two 8,000-ton mechanical and two 6,000-ton mechanical presses in the Georgetown facility.

Another critical development in the growth of the company has been the arrival of sinter-forging by way of a technology transfer from Toyota, which supports the production of powder metal connecting rods. The forming, sintering and forging of powdered metal provides a means for Louisville Forge to produce near net shape connecting rods offering minimal raw material yield losses and minimizing machining requirements. “We are continuing to invest heavily in expanding our connecting rod production capacity for Toyota.” Treilobs said.

The vast majority of the work that is done by Louisville Forge is for the automotive industry, but Treilobs said that about 12 percent of the company’s business is in the heavy-duty truck market and some 5 percent is in general aviation. Louisville Forge supports other major automotive forging applications that find their way into General Motors and Ford vehicles by way of tier one machining companies.

Treilobs said that the biggest issue for the company in the last three years or so has been addressing rising raw material prices: first for steel and alloy and more recently for natural gas, all key elements in the forging process.

“We’ve been fighting to minimize the increases and negotiating with our customers to pass them along.” Treilobs said. He added that some of the higher costs have been for the indirect materials, which are not easily passed along, but nonetheless required to transform steel into precision forgings. Among the high hitters are die steels that are high in alloy content, energy required to heat billets to forging temperature and post forging heat-treating costs.

Furthermore, exchange rates and foreign subsidies and for overseas steel makers and forging companies have made competing more difficult. “It seems that everybody is trying to commoditize what we make,” Treilobs said. “People don’t understand the level of technology that is required to make the steel, first off, and also to convert it into a forging. There’s quite a lot of capital needed – it’s a capital-intensive operation that requires a lot of preventive maintenance. And it’s costly to upgrade; most of the machine components, tools, fixtures and material handling systems are custom made to deal with different parts.”

He explained that in crankshaft manufacturing, technical challenges and design considerations require close coordination with machining customers, and the lure of low cost products that are manufactured in China or elsewhere in the Pacific Rim might experience higher cost of quality issues in downstream processes road if price was the major driver in the sourcing process.

Going Lean
Treilobs said that since the purchase by Aichi, there has been considerable effort to implement a TPS (Toyota Production System) philosophy, including kaizen and visual management. He acknowledged, however, that the cost pressure of high raw material and energy prices has made it difficult to switch from batch processing to in-line processing. “To do that, you need to re-arrange a lot of the furniture,” he explained.

“During the next few years we will initiate various projects to automate, simplify and standardize a lot of our process steps” he said.

That said, a lot of positive things are happening. The truck customers of Louisville Forge are in the process of re-tooling their diesel engines to meet new emission standards that come online in 2007, while its largest customer, Toyota, is looking to localize even more of its supply chain. Additionally, the company is making crankshafts for some Cadillac lines as well as GM’s 3.5 liter and 3.9 liter engines that are used in the Chevy Malibu and other models.

“Right now there’s a strong demand for the products we have,” Treilobs said. And if anything changes, this is one auto parts manufacturer that has shown it knows how to shift gears.