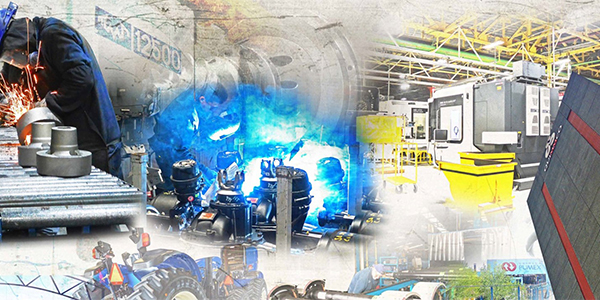 Founded in 1994, when the Barrera family decided to incorporate Quimmco, S.A. de C.V. as a holding company, Forja de Monterrey became one of the core businesses of what has become a prominent industrial consortium based in Monterrey, Mexico.

With businesses in the automotive components, chemicals, and construction industries, Quimmco has experienced significant growth, primarily as a result of new business development and acquisitions in the automotive components industry. Its core businesses include a heavy-duty truck axle and brake company, a crankshaft forging company and a crankshaft machining company which supply components to OEMs mainly located in the North American – and increasingly, the world’s – automotive market.

The group, through its three operating subsidiaries, manufactures in Mexico and sells to both the domestic and international markets. Exports account for about 50 percent of its total consolidated sales. Almost 70 percent of exports are to the United States, though the company has been looking for new markets, and is presently selling to Brazil, France and Sweden. The group has approximately 5,300 employees.

Acquisitions, strategic partnerships with global payers such as ArvinMeritor and CNH Global, and internally developed start-up companies to supply new markets, account for much of the company’s growth.

Expanding Empire
“I believe we are on the right track regarding growth, and we will continue to expand. We haven’t explored all of the opportunities in our entire market yet,” says new Sales and Marketing Manager Edgar Moncayo. He adds, “”Rapid growth is not easy to manage for any company. We’ve struggled to meet tight delivery schedules but that’s what happens with quick expansion.”

Some of these subsidiaries consist of joint ventures with global automotive manufacturers such as Sisamex, which is a partnership with ArvinMeritor, Inc. to manufacture axles, brakes and assemblies for heavy-duty trucks and trailers. Sisamex primarily supplies heavy-duty truck OEMs such as Freightliner, Kenworth and International, among others. Another joint venture is CNH de Mexico, which is a partnership with global ag tractor supplier, CNH Global, a Fiat subsidiary. CNH de Mexico assembles tractors and farm equipment in Queretaro State. Both subsidiaries are 50 percent owned by Grupo Quimmco.

The chemical and construction divisions account for about 10 percent of the company’s consolidated sales. The chemical division has businesses that primarily produce polyols, resins, and polyurethane foams for use in the construction and appliance industries. In addition to these product lines the company markets machinery and equipment for the application of polyurethane.

The small construction division is mainly dedicated to the production of office furniture, but is also involved in developing affordable housing in different regions of Mexico. The Construction Division contributes with less than 3.0 percent of the total consolidated sales.

Challenges lead to opportunities
Located within a few hours of the U.S. border, Forja de Monterrey is in an excellent position to benefit from the North American Free Trade Agreement (NAFTA), which allows for the free trade of goods and services among Mexico, the United States and Canada. Mexico, and the city of Monterrey in particular, have become the center of the North American automotive parts manufacturing sector.

The automotive parts businesses are a natural outgrowth of the company’s axle manufacturing origins. In the last five years, the company added cast-iron foundry Blackhawk de Mexico to its family of businesses, increasing its ability to penetrate the tractor and heavy-duty truck parts market.

“NAFTA has helped us to open new markets. Our people are well qualified and we’re only a few hours from the U.S. border,” Moncayo noted.

Almost 70 percent of the company’s sales are either direct or indirect exports with the United States being a main destination for the company’s complementary product portfolio.

Moncayo said the company’s Mexican manufacturing operations provide significant competitive advantages. Monterrey has access to excellent highway, railroad and seaport systems and also “it costs a lot less to ship parts from Monterrey to Tonawanda, New York (where General Motors has a major assembly plant) than freight from China,” the sales manager said.

“The biggest advantage to the U.S. is the lower cost of production in Mexico,” Moncayo said, pointing to the recent market movements in the price of steel from about $300 U.S. a ton to over $900. “Of course you must pass through most of the increment but the only way to remain competitive is to create a value-added product and through cost-saving innovations.”

To take advantage of new steel-forging technologies, the company brought Russian and Brazilian technicians into Mexico to train their own employees. “It took us a few years,” Moncayo said (the change to micro-alloy casting began in 1997 but didn’t come on-line until 2001), “and we built a good team.”

Moncayo explained the new steel forging process: “What we can do today is to lighten the part, conserving steel. We have changed the finishing process, mostly by using more micro alloys that reduce the volume of steel – and a lower mass means less money. Secondly, with different heat treatments, we save energy costs. Micro alloys don’t need quenching, and we change the chemistry of the steel to reduce process time, energy and tempering. Recently, the company invested in software designed to analyze steel forgings as they are produced. “The software allows us to keep control of all the variables in the forging process,” Moncayo notes.

Going (slightly) outside the box
Grupo Quimmco owes its spectacular growth to its expansion in complementary automotive components businesses and to export sales. Its strategy has been to diversify into related businesses that exploit the company’s competitive advantages within the same industry. Parts for agricultural equipment and automobiles are not much different from truck parts. With more plastics now used in automotives, maybe having the chemical division makes sense. And, recognizing that the United States is not the only important foreign market, Grupo Quimmco’s assemblies, axles, crankshafts and other products have started going into Brazil, France and Sweden.

Moncayo summed up Forja de Monterrey’s manufacturing “master plan” this way. “Our target is to be the best forging company; to provide excellent service to our customers, competitive prices and value-added. We want a wider range, other components and to find niche markets, while maintaining reliable manufacturing processes that guarantee quality and specification compliance of all production.”