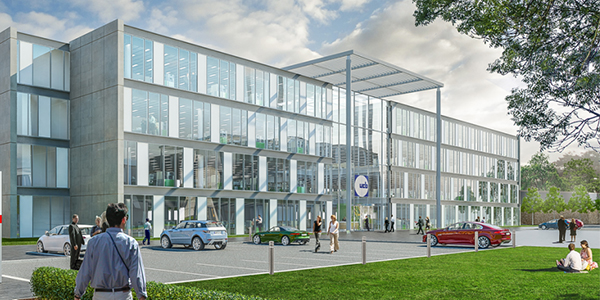 “Degussa Corporation is fully dedicated to the Responsible Care® program, an American Chemistry Council (ACC) program requiring the consideration of health, safety and environmental protection in all phases of a chemical product’s life cycle….We view Responsible Care® as an opportunity to work together with customers, communities and the public.”

This quote from the company’s Web site sets out a policy that guides the operations at one of the leading specialty-chemical companies in North America. Headquartered in Ridgefield Park, N.J., Degussa operates production facilities, research and development facilities, and applied technology centers at 28 sites in the United States and Canada. Sales in 2000 were approximately $3 billion.

Strong Mixture
Formed in March 1999 with the merger of German-owned Degussa and Hüls in North America, the U.S. organization was recently renamed Degussa Corporation and is a subsidiary of Degussa AG, an international enterprise based in Frankfurt, Germany. The name change came in February 2001 when Degussa AG merged with SKW, a German producer of construction materials, fine chemicals and other intermediates. The 125-year-old parent company posted annual sales of approximately $16 billion in 2000.

The company’s Theodore, Ala., facility – located just outside the port city of Mobile – is an outstanding example of Degussa’s policies in action. The 1,650-acre campus has 24 state-of-the-art production plants that produce more than 30 chemical products.

Charles E. Story, vice president for government and public affairs, comments on the significance of this business: “Mobile is the biggest North American operation of Degussa – the biggest in the parent company’s investment, in land size, number of employees and number of products. The parent company has invested about $1.5 billion in this location, and we are a major contributor to the Degussa Corporation bottom line.”

When the Mobile operation started in 1973, the facility was staked out on a 430-acre site with a small core of employees, Story among them. He recalls, “It was raw land, and there was no office. One of my first jobs was to design a human-resources package so we could start recruiting people.”

Degussa is now one of the 10 largest employers in Mobile County. Within the facility, approximately 1,400 employees keep the chemical-producing processes operating 24 hours a day, seven days a week. The facilities include 4.7 million square feet of production space and more than 300,000 square feet of warehouse space. More than 93 percent of the production facilities are certified to the ISO 9002 standard or higher.

Formulas for Success
One of the world’s largest suppliers of phenol and acetone, Degussa in Mobile also manufacturers materials used in its own processes and uses production byproducts in other formulations.

A representative list of products and applications includes:
• Acetone – acrylics
• Aerosil® fumed silica – paints, toothpaste and tablets
• Cyanoacetates – home, industrial and biomedical products; pharmaceutical and agrochemical compounds
• Dynacoll® copolyesters – automotive, woodworking, packaging, textile and bookbinding adhesives
• Dynapol® LH resins – exterior coatings and appliance topcoats
• Hydrogen peroxide – environmentally friendly bleaching agent used in gold-mining operations and in oxidizing and detoxifying waste products
• Methionine – livestock feed and pharmaceuticals
• Phenol – biphenol-A and aspirins
• Quab® cationizing reagent – paper, cosmetics and textile processes
• Vestagon®B 1530 and Vestagon®B 1400 polyisocyanate – coatings with high gloss, superior weatherability and color retention
The line of products made at the Mobile facility becomes even more impressive when considered in the context of the rigorous safety procedures followed at the site. All operations are in keeping with the ACC’s Responsible Care® Codes of Management Practices. Under these codes, Degussa tests its emergency plans in coordination with the community. The company has also invested more than $70 million in environmental control equipment. Its goal is to prevent all work-related injuries, and its production safety designs and programs are continually updated. The company’s transportation and storage codes also meet stringent requirements. In addition, the employees practice safe-handling procedures of the chemicals from initial manufacture to distribution, sale and ultimate disposal.

Force for the Community
According to Story, an important factor in the success of the Mobile operation is its skilled and stable work force. Drawn mostly from the area, Degussa employees receive training as chemical operators in a program that is run in cooperation with the state. He notes, “Candidates spend 14 weeks in the evening training program before they are hired. Then there is more training and cross-training on the job. After six or seven years, our workers have what could be called a college education in the industry.”

Another factor, says Story, is the low turnover rate of employees. “Our work team is solid,” he states. “And Degussa has a ‘no layoff’ policy, which we followed even in the 1980s when times were tough. We made the decision that we wanted to keep our skilled employees. We had invested in them, and they had years invested in Degussa.”

An integral part of Degussa’s investment in people is its involvement in the community. Story says, “We adopt schools and we put computers in them. Our employees are encouraged to volunteer in and sit on the boards of community organizations. Degussa’s local budget for community action is more than $200,000, but the service of our employees in the community adds up to hundreds and hundreds of hours.”

According to Story, the Mobile site is poised for continued growth. “Because of the infrastructure in place and the acreage available, the plant will continue to grow,” he says. “We have the people, space, utilities, transportation and energy. We can add another plant and not have to add services.

“The future looks bright for Degussa Mobile. There is clearly a desire on the part of the parent company to invest in the United States, and Mobile is the crown jewel of the U.S. operations.”