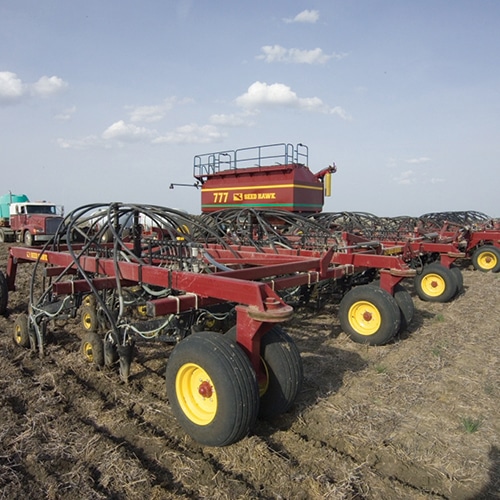 Seed Hawk Inc.’s unique agricultural product line includes advanced technology developed on the farm for farmers. Committing itself to its mission statement
“To manufacture the most grower-profitable precision seeding system in the world,” the Saskatchewan, Canada-based company established itself upon the strength of an innovative drill that seeds, bands fertilizer and packs in one pass. In its 16-year history, it has placed nearly 1,000 such seeders in the field. Today, its unsurpassed accurate seed and fertilizer placement systems help farmers world-wide to increase their efficiency and, in turn, maximize their profits.

“We focus on seeding equipment,” emphasizes Pat Beaujot, company president and co-founder who came into the business as a farmer and agronomist. “That includes the tools that place the knives into the ground – the toolbar, as we call it –and the tank that carries the seed, as well the fertilizer and accompanying air distribution system. That’s what we manufacture and sell.”

Specifically, Seed Hawk technology is deployed for solid seeding, or small seed, explains Beaujot. “It isn’t utilized with row crops such as corn and soybean. Rather, it’s used with solid-seed crops such as wheat, barley, oats and canola.”

In this way, Seed Hawk technology seeds fields throughout the world. “Our main markets have encompassed the prairies of Canada and the United States, but we have established new markets in places such as Russia, Kazakhstan, Ukraine and Australia,” says Beaujot.

INTERNATIONAL PARTNERSHIP
That market expansion is a direct result of the company’s partnership with Väderstad-Verken AB, a large agricultural marketing firm headquartered in Sweden that markets seeding equipment in Western Europe. The rapidly growing Seed Hawk (the company was established in 1992) entered into an agreement with the European company in 2006. “In the fall of that year, we finalized an agreement to sell a minority interest of our company to them. Since then, our growth has been phenomenal,” relates Beaujot.

Indeed, last year the company doubled its production and experienced 100-percent growth, he reveals. “We’ve been used to 25 to 30 percent growth in each of the 16 years of our existence. Now, we’re looking to grow according to what we can handle.”

And the partnership with Väderstad-Verken will help the company maintain a high level of production capacity. “It not only had a significant impact on our production, but it provided us with capability to expand with confidence,” says Beaujot. “Due to the partnership, we’ve entered into a three-phase expansion project and spent $3 million on the first phase alone. The partnership helped justify that kind of expense, because it positions us in many markets throughout the world – places where we hadn’t gone before. We’re no longer as dependent on the Canadian prairie market as we once were.”

As Beaujot suggests, the business arrangement, a perfect example of a symbiotic relationship, has enabled Seed Hawk to expand its technology and exports. “Väderstad-Verken didn’t have a product line that fit the former Soviet countries in Eastern Europe, and it felt that we had the appropriate line to supply that market. So, it helped us immensely by speeding up the introduction of our product line into new markets where Väderstad-Verken had already established a good business reputation.”

Impact of the partnership has been profound. “Before 2006, we had only exported about a handful our machines. This year, almost a third of our production is being shipped overseas,” Beaujot points out.

In addition, in 2007, Seed Hawk’s production advanced to the point where it was able to introduce its 84-foot tool bar. When this was combined with it 800-bushel air tank, the company boasted the largest seeding system in the world.

FARM-GROWN ENTERPRISE
While Seed Hawk was established in 1992, the seeds of its origin were planted in the 1980s. During that decade, Beaujot amassed valuable experience by working in agronomy and sales for Simplot Canada Ltd. Combined with his own farming background, the experience provided him with market perception. “I could see that the industry needed to transition into zero-till farming,” he recalls.

Ensuing circumstances helped him take the industry in that direction. During this period, his brother purchased their parent’s farm. In the process, the brothers inherited a six-year-old air seeder that came with significant limitations. Specifically, it wouldn’t allow the brothers to deploy a reduced tillage operation capable of conserving soil and generating savings in moisture, time, fuel and tractor operational hours. To compensate for the shortcomings, they reset the inherited seeder openers to enable proper separation between fertilizer and seed. They also added a packer.

The resulting modifications allowed for accurate shallow seeding and precise fertilizer placement with consistent packing. With additional tweaks, the brothers designed and manufactured a new air drill – setting the stage for the emergence of an immensely successful company.

By 1992, they developed a prototype and, following some testing and subsequent adjustments, were able to successfully seed their 1,000-acre farm. Aware of what they had accomplished, they joined forces with Brian Kent and Brian Dean, the designers who helped develop the prototype, to establish Seed Hawk, Inc. Within a year, the partners had manufactured and sold six seeders.

EARLY GROWTH SPURT
Development proceeded rapidly during the next 10 years, with the company expanding the original manufacturing facility several times, and building office space. With Beaujot as its president and Dean its vice president/R&D manager, the company established a network of 14 dealerships representing 29 locations in western Canada and the United States.

“The opener we developed was very unique to the industry,” recalls Beaujot. “Since then, other companies have developed similar openers, but ours was developed for the zero-till market, and it proved to be better than anything else on the market, not only from an agronomic perspective but in its strength and durability.”

The advantages not only prove valuable in the field but also reflect Seed Hawk’s purpose. “We focus very intensely on grower needs as well as sound agronomic practices,” comments Beaujot.

Seed Hawk is also expanding its product line by developing larger tank sizes. “As growers move to zero till, they require larger tank sizes to carry both seed and fertilizer,” says Beaujot. “In response, we developed different tank sizes and options to suit different farming needs around the world, which was necessitated by our relationship with Väderstad-Verken.”

FACILITY EXPANSION
The transcontinental relationship also energized Seed Hawk with the confidence to expand its production capacity, in a physical sense. Last year, Seed Hawk initiated a three-phase expansion plan of its manufacturing facilities. “The first phase began last winter, when we added 15,000 square feet of new shop space. This phase was designed to accommodate assembly of domestic units geared toward the North American Market,” he says, adding that the fully modernized area includes overhead cranes. “While one side of the shop is for assembly, the other side is used for loading containers for overseas shipment.”

The second expansion phase, which is planned for spring 2009, will include addition of a weld and paint facility, to further increase production, says Beaujot. The third phase, he adds, is down the road. “It will focus on parts warehousing as well as processing.”

With the expansion, Seed Hawk is tripling its production capacity. “In our existing facility, we were turning out about 100 units a year,” says Beaujot. “Now, we’re looking at producing 300 units a year.”

The expansion will also accommodate the growing size of products that Seed Hawk manufactures. “When you look back at 1992, our product size for a big machine was about 40 feet. Now, we’re building 84-foot-wide seeders and 800-bushel carts, which is the biggest system in the world. We needed a bigger facility to build these products. Our original facility is not big enough to handle that size.”

Meanwhile, through a strategy of continued improvement, Seed Hawk plans on diversifying its product line. Looking farther down the road, it anticipates that many Väderstad technologies will benefit growers on a global scale. In addition, the partnership will further advance part of Seed Hawk’s vision: “To be the global leader in integrated zero tillage seeding systems by continually listening to our grower’s needs and responding appropriately.”