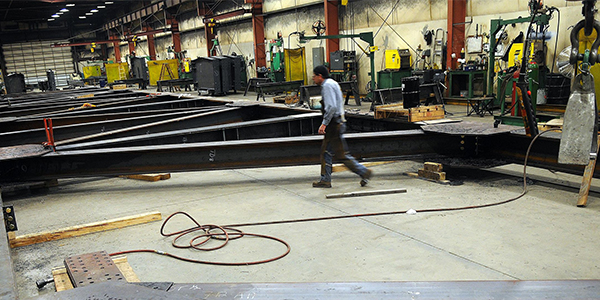 Many youngsters played with building blocks as children, crafting elaborate structures and dreaming of the day they could make bigger structures. That dream has come true for the folks at Garco Building Systems, a Spokane, Wash.-based manufacturer. Since 1958, Garco has engaged in the design, manufacture and distribution of steel building systems for commercial, industrial, community and agricultural applications. Garco makes standard systems with canopy, overhang and façade features, along with supplying a broad spectrum of non-standard sizes, special designs and unusual loadings to meet specific customer needs. Garco’s buildings are custom computer designed for optimum strength and components are refined for easy erection so that the buildings may go up more quickly than conventional construction. This reduces labor costs and on-site modifications, explains Bill Savitz, Garco’s president.

“Basically what we do is make what I call a big Tinker Toy set,” Savitz says. “We design the buildings and put the pieces of the Tinker Toy set together, and then send it out to one of our network of contractors or on-site crews to build,” he adds.

Surviving the elements
These Tinker Toy sets, as Savitz affectionately refers to them, have been erected in many corners of the world, and have more than served their purpose. Garco has done projects in places as far reaching as Uzbekistan, Russia and Antarctica. In fact, one of the Antarctic projects held up under less-than-stellar weather conditions.

“About two years ago, we did a wastewater treatment building in Antarctica,” Savitz relates. “It was an environmentally controlled building. Then last winter, they had some awful storms with winds of up to 180 miles per hour and temperatures that were 40 degrees below zero. There were problems with several buildings during that time, and many workers were holed up in our building, because it was the only one that held up under the conditions. Our building came through with flying colors.”

The latest project that Garco has undertaken in Antarctica involves a group of five buildings that were used for weather balloons. “The buildings were set on skids and hauled around, used for long-distance launching of weather balloons,” Savitz reports.

Savitz says that part of the reason that Garco’s products last so long is because of the raw materials that are used to build them. They are of high quality, and purchased to meet rigid specifications. In addition, panel profiles are available in earth tones that blend with other building materials. They can be effective as a “thermal envelope” to minimize heating costs when they are properly insulated.

Garco has also done a great deal of building for gold mines, steel mills, and the aluminum industry, along with other heavy manufacturing applications. In fact, this has been a trend that Garco has set simply by sticking to its guns. “To some degree, we’ve had to shift gears, and redirect our efforts toward institutions such as schools, churches and large warehouses. However, we’ve always focused on heavy industry, and by staying with that, we’ve been able to grow. Much of our competition has drifted away from large manufacturing plants, and customers have come to rely on us because we’ve always been there,” he adds. Savitz notes that mining, a large segment of its business, is very cyclical. “Mining is dependent on the price of gold,” Savitz says. “When it’s down, there’s not much mining going on. But when the price goes back up, mining comes back in. We’re there to build for the mining industry when much of our competition has gone away.”
Growth as a milestone

It is this determination that has led to what Savitz believes is one of Garco’s biggest milestones: significant growth. “Back in the 1980s, we were losing money, and it was a real struggle to survive,” he recalls. “Because of the projects we’ve taken on, we were able to get beyond survival to success. And because of that, we’ve become a favored company of large industrial clients throughout the world. We’ve established ourselves as sophisticated, with complex engineering capabilities, and we’re reliable, which is what we’re known for in the industry.”

It is reliability that works in Garco’s favor, rather than a rash of new products or technology. “We were just at a builders’ convention in Phoenix,” Savitz relates. “The question I heard most often from potential customers was, ‘Will this do what I need it to do?’ And that’s what we focus on, being the best at the basics. We don’t have a lot to offer in the way of new gizmos and gadgets. That’s not what we do. We offer engineering and support services for all project needs, and we’re good at what we do.”

This “basics” approach has stood Garco in good stead in the sales arena. Explains Savitz, sales were up 80 percent in 2004 over 2003, and right now, he is projecting a 20 to 25 percent increase for 2005. Currently, the company operates with 150 employees on 35 acres with a 140,000-square-foot manufacturing facility and 15,000 square feet of office space in Spokane, Wash. An expansion to the Ohio River Valley region is being considered for 2006.

A proud history
This growth potential comes after a storied history for Garco. The company’s roots go back to World War II, when Wayne Garceau came home from the war and began a career as a residential contractor in Spokane. After building homes for the families of veterans, he began to construct the components for agricultural buildings. Garceau later used the network of dealers he’d established to go into manufacturing himself. He operated both the manufacturing and construction businesses until selling part of the business in 1967. A portion of that business was sold to Dallas-based Gifford Hill in the 1970s. Later an employee, Terry Middaugh, bought the company and renamed it Garco Building Systems. When Middaugh decided to step back from day-to-day operations, a senior management team of five people, including Savitz, purchased the company and have kept it as it exists today.

A small management team, along with persistence and determination, are the ingredients that Savitz believes will carry Garco into the future. “We have aligned ourselves with the best contractors to perform the work of building our structures,” Savitz says. “We have a core group of good employees who have been with us for a long time. These are the factors that are at the core of why we’ve done as well as we have, and will continue to do well in the future.”