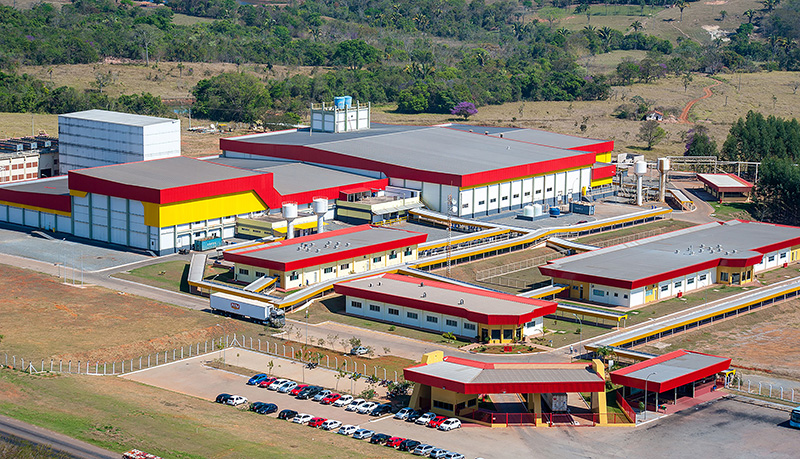 It has not been an easy year for food producers in Latin America’s largest country. The nationwide trucker’s strike in May slammed on the logistical brakes for Brazilian industry and ate into profits and investment budgets. Commercial restrictions and barriers on imports by the European Union, on pork in Russia and the imposition of religious criteria, such as Halal meat in Arabic countries added to the challenges. One of Brazil’s biggest food companies, Rio Branco Alimentos SA, however sustained growth and predicts a 35 per cent increase in exports this year in line with last.

More widely known as Pif Paf Alimentos, the company has gone from strength to strength since its foundation in 1968. “Pif Paf has always valued quality and respected sanitation and rigid quality control laws. Even in the face of the challenges this year, it has maintained investment in modernization and the launch of new products – all with a view to bring practicality and simplicity to meal preparation,” affirms CEO, Paulo Roberto de Oliveira Andrade.

Pif Paf produces an ample portfolio of over 350 products. Among them, a range of frozen meats, fish and vegetables and ready-made frozen dishes such as pizza, lasagna, Brazilian cheese bread and snacks.

“In particular our shredded chicken, which is prepared with our special know-how deserves a mention. It is the only shredded chicken breast on the market that maintains its original fibers, consistency and great flavor, which not only complements the dishes we use it in but far outsells competitors,” Andrade adds.

The line of ready-made frozen meals and snacks reflects Pif Paf’s constant response to the market. Between 2013 and 2015 the company expanded business by introducing the ‘Ladelli’ ready snack line for parties. The same period in Pif Paf’s history was marked by the creation of the company’s administrative council for the consideration of future ventures and improvement. In 2017, for the first time in its history, the executive direction was taken over by someone, who was not a member of the founding family. This is when Andrade joined the team and considerable restructuring occurred.

The company was no stranger to careful contemplation and evaluation of market opportunities. The founder, Avelino Costa, having acquired a small slaughterhouse, in Rio de Janeiro with just seven employees back in 1968, instantly recognized a change in society and commercial opportunity. As more and more women were entering the workplace, in his view there was a need for more practical meal preparation – livestock had to make way for the frozen chicken.

The first steps toward growth were taken in 1972, in Minas Gerais state and the company transferred to Visconde de Rio Branco. Two years later, Pif Paf opened its first chicken feed factory and hatchery – essential parts of the integrated poultry production its founder envisaged. Partner farmers were given chicks, feed and technical assistance for raising the birds and delivering them for processing.

“Pif Paf was the first producer to make Brazil the world’s largest chicken exporter, through a 1975 contract with the Middle East for the export of two thousand tons of chicken,” Andrade exemplifies. At the start of the 1980s, 80 per cent of production was destined for export and, carefully observing consumer trends, Pif Paf focused on chicken.

It was during the 1980s too that the company opened its cold cuts factory, which also processed the cod and shredded meat products. Soon after, in the 1990s, Pif Paf updated its premises by vertically integrating pork production and inaugurating a new slaughterhouse and food processing center, hatcheries and feed factories.

“We have always been focused on eating habits and new tendencies. Opening new facilities and the online market. Pif Paf has developed a revolutionary system of online sales and delivery of frozen products via the website www.comprepifpaf.com.br,” says Andrade.

“Production begins in the hatcheries which are company-owned and oversee the reproduction process. We are completely vertically integrated, acquiring raw materials such as corn and soya to make nutritionally balanced feed… our animals all follow a diet produced by us and once raised are brought back for processing,” Andrade explains.

“We supply the main supermarket chains in Brazil’s, south-east and the states of Bahia and Goias and export to 21 countries such as Canada, Singapore, Russia, Japan, Hong Kong, Argentina and South Africa among others,” he continues.

Pif Paf enjoys fruitful, strategic partnerships with other companies in the production chain, including transport cooperatives (responsible for the safe and sanitary delivery of intermediary products and frozen goods) and rural producers for livestock rearing. “Our business is characterized by vertically integrated production of poultry and pork. We provide partners with basic materials, animals, feed, medicines and technical assistance among other things,” Andrade says. “Today we have over 600 partners, who are an integral part of our processes. The advantages of this business model are reciprocal.”

Pif Paf is the largest Brazilian company in the frozen food sector, that has been under the direction of the same family, Avelino Costa and Luiz Carlos Mendes Costa for over fifty years.

Andrade is resolute in revealing the driving force behind the company’s innovation, struc ture and success: “An important characteristic of Pif Paf Alimentos is the excellent team, which over time, has shown its love for the company. We always strive to offer something extra, whether it be in quality, variety, practicality, added value or service.”

Pif Paf Alimentos has constantly developed its products and portfolio to fit the needs and concerns of the consumer. It is clear that the company not only values people it employs but the millions it feeds. This would certainly emulate Andrade’s closing comment: “We want to be recognized not as the biggest in the industry, but as the best.”