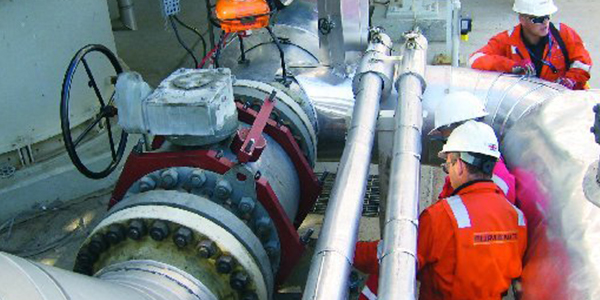 Simply put, if your industrial processing operation has a leak, Furmanite, Inc., is ready to fix it – or to prevent it from happening in the first place. Indeed, “furmanite” (small “f”) is as much a part of generic product language as, say, “xerox” or “kleenex.”

“People say all the time that they had to ‘furmanite’ a leak, even if we didn’t do it for them,” says Joe Lahey, the Houston-based company’s president and chief executive officer. “Our process has become part of the language, and the solution. We knew about branding before it became branding.”

“Our company is built on the desire to deliver superior expertise,” explains W. Scott Wiseman, vice president of marketing and product development. Wiseman joined Furmanite to direct the implementation of customer-focused initiatives. “We will tackle any leak, any time, anywhere,” Wiseman says. “We will identify the best technique, and will seal any leak while our customers’ plants continue to operate.”

Furmanite operates in 40 offices around the world, and has a total of more than 1,200 employees (300 in the United States). It’s the industrial field services unit of Kaneb, Inc., based in Dallas. The company’s core services include leak sealing, on-site machining (the company can provide 48-foot mobile machine shops), valve repair, Trevitest (a patented hydraulic testing system), bolting services, inspection, concrete repair and restoration, pipeline intervention, diagnostic testing and more. Its customer list includes top-tier companies around the world.

Furmanite has been around since 1922, when Clay Furman introduced the world’s first pipeline leak sealant. The technology emerged from the geographic confines of the burgeoning oil and gas industry; but its real impetus came from the military, which needed to seal up various steam operating systems, according to Lahey. The power generation industry was also an early customer.

Furman sold the business to a United Kingdom-based licensee in the early 1950s. Furmanite remained a British-based company until 1991, when Kaneb bought it and moved the headquarters to the United States.

From that early era has developed the technology to seal on-line leaks at temperatures ranging from cryogenic to 1,400 degrees Fahrenheit, and pressures from vacuum to 5,000 pounds per square inch. This proprietary technique involves the use of Furman’s patented sealing compound to form a molded gasket around the vessel being repaired.

Over the years, Furmanite has developed a number of products and tools aimed at facilitating the stoppage and prevention of leaks. Its innovations in products and services – and its commitment to total quality management – continues to the present.

Late last year, for example, it introduced FurmaSeal, a high-pressure self-sealing clamp to repair pipelines and encapsulate leaking valves, flanges and other components used in on- and offshore piping. FurmaSeal products are comprised of self-sealing, split-pressure vessels using a perimeter elastomer sealing system.

Another new product is Torque Tamer, a system designed, developed and refined to provide a lightweight, cost-effective method of controlling the rotational torque of pneumatic wrenches used in operating valves in process plants. This hands-off operation is achieved by combining the torque-controlled pneumatic right-angle wrench, providing rotation at the valve hand wheel; and a custom-designed and -fabricated rotational torque-retaining frame attached directly to the valve itself.

Torque Tamer joined a product line that includes the Furmanite Silk line of on-site machining equipment certified to ISO 9001 standards. “Furmanite Silk portable machining tools have been used in all industries from nuclear to food processing. Our technical expertise and experience allows us to develop solutions for our customers, eliminating the need to send machinery off-site,” according to Wiseman.

The company’s Tube Plugs, meanwhile, isolate leaks on heat exchanger and condenser tubes; and its Milsheff Spray-Stop Covers offer a cost-effective means of protecting personnel from harm, and equipment from damage from steam and chemical leaks.

Another key product is the Electric Motor Performance Analysis and Trending Hardware (EMPATH). Developed in partnership with Framatome Technologies, EMPATH measures and analyzes electric motor current and voltage on critical processes and equipment.

Other Furmanite inspection services include the Fugitive Emissions Inspection Program, which reduces hazardous and volatile emissions; and the Steam Trap Inspection Program, designed to control energy losses. “Every year, we perform thousands of fugitive emissions-monitoring events, including leak detection and repair, on industrial components,” Wiseman says.

Speaking of solving problems, Furmanite has a year-old initiative called Customer First, “which we created to better serve the needs of all Furmanite customers and partners,” according to Lahey. The program is designed to facilitate rapid-response services, such as Furmanite’s pioneering leak-sealing service, through innovation, field applications of new data collection technology and process streamlining. Part of the effort is to “partner with customers to identify their needs long before it becomes an emergency,” Lahey continues. “This is accomplished by leveraging our expertise and our customers’operations experiences.”

“Customer First is exactly as the name implies,” he continues. “Its mission is to continually improve and develop our combination of products and services to meet the demand of the industries we serve.”

The bottom line is that Customer First was implemented to further focus the company’s strengths, including engineering support, quality assurance, superior safety systems and patented technologies. “We are in the emergency business,” Lahey says. “Our reach is global. Our focus is on quality and on time – solving problems before they can shut a business down.”

Last year, as part of Furmanite’s long-term effort to better serve customers, company management launched a global reorganization that has centralized marketing, sales support and administrative control in its Houston home base. Worldwide operations have been consolidated into seven operating and business divisions, according to Lahey.

“As the worldwide leader in this technology, we have a great deal of responsibility,” Lahey concludes. “We accept that responsibility, and we want companies to know that we are ready to solve their problems.”