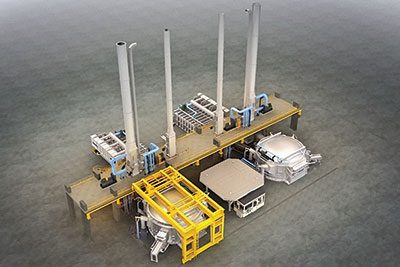 The Andritz Group was first established all the way back in 1852 by the Hungarian entrepreneur Josef Korosi in Andritz, a suburb of the city of Graz, Austria. Beginning as a small iron foundry, the company’s initial production program focused on large capital goods, such as cranes, pumps, and water turbines, and later was extended to bridges, steam boilers, engines, and mining equipment.

The company evolved greatly from there, gaining global recognition with the introduction of the first cold rolling mill in 1912. The rest of the 20th century featured more of the same, with ANDRITZ rolling out a number of metal products—amongst others—that were the first of their kind, including an electrolytic pickling line for stainless steel designed in 1952, a 20-high rolling mill in 4-column design in 1958, a push pickling line for carbon steel in 1964, and a mixed acid recovery plant in 1990.

Comprehensive Capability
And as we stand in 2016, ANDRITZ METALS has only continued this tradition of innovation. “ANDRITZ METALS is a company that provides complete solutions to its clients’ needs,” says Blake, adding, “From initial engineering studies and analyses, through project management, construction, and commissioning, to training the operators, we are able to cover all aspects of designing and building many types of industrial equipment.”

At the center of ANDRITZ METALS’ success is their line of furnace products designed for the primary cast houses part of smelter plants, secondary cast houses, and recycling facilities. “We are particularly renowned for our large round-top melt furnaces, whose capacities can go up `to 140 tons and are viewed as critical components to the success of high volume facilities,” he says. High volume facilities are considered such if they produce more than 200,000 tons per year.

In fact, the company was the original developers of the round-top charge aluminum melting furnaces. Initially used for high volume canstock production, this furnace has found a new identity with the emergence of aluminum in the automotive industries as well as others.

The design of the round-top furnaces and their relatively rapid rise to becoming the “standard” in high production cast houses was an important development not only for ANDRITZ, but their customers as well. See, prior to these furnaces becoming available for use, the aluminum industry was forced to employ far less capable rectangular front door charge furnaces, simply because they were the only technology available at the time. “With the rectangular furnace types, users had difficulty charging, and the larger the furnace the greater the difficulty they experienced,” says Blake.

Product Evolution
Blake adds that despite the great success of their first generation model, ANDRITZ’s round-top furnaces are a “product that we, much like many of our other products, have continuously evolved over time, with the newest form being our third generation round-top charge furnaces that have regenerative burner systems that utilize 50 percent less energy to melt per ton of aluminum compared to the first generation we produced.” Running alongside this furnace line are the company’s HiTEQ furnaces as well, an all-in-one product that can melt chips, ingots, sows, and return material in a single furnace, while giving users the option to control ratios.

It’s this kind of commitment to product development and innovation that ultimately sets ANDRITZ apart in the market, as Blake says that the main reason many of their customers choose them is because of their capability to not only deliver a high quality furnace, but one with a completely engineered system that can do it all. “We consider ourselves to possess a broad knowledge base with respect to the aluminum market, which effectively enables us to combine important technologies together to deliver a turn-key solution to our customer.”

Fueling this ability is ANDRITZ’s expansive R&D presence, which features over 1,000 personnel around the world dedicated entirely to the pursuit of enhanced product excellence. Most recently developed is the company 3MAX system for their aluminum furnaces, a technology that reduces dross formation in large aluminum melters. “As you can see throughout our history, innovation and the ability to adapt our products to new and emerging needs in the market is a huge strength of ours, and this 3MAX system is no different.”

Effective Installation
But aside from product quality and innovation, one of the company’s chief skills is their ability to seamlessly and efficiently install their furnace products in the facilities of their customers. “Because the furnaces we make are so big, they often have to be assembled at the actual production facility of our clients,” says Blake, adding, “So as a result, we have a team of dedicated site managers, engineers, and supervisors that are deployed to sites all around the world to manage the construction, which can include assembly of the casing, lining the furnaces with bricks, monolithic refractory, and big block services depending on their needs.”

Given their non-compromising approach to quality, all of their on-site engineers are ISO certified and Blake says that assembly jobs are constantly tracked and monitored from start to finish—after all, it’s important to ensure that when everything comes together, each component fits as well as the manner in which it was designed.

Because of this comprehensive mindset—innovation, quality of product, and efficient, effective service—Blake says there’s no shortage of “success stories” in his mind when thinking about ANDRITZ METALS competing in the global marketplace.

“If I had to choose a more recent example, I would point to one project we completed for a Chinese company called Weiqiao Aluminum in 2013.” He says that, as part of ANDRITZ’S competitive spirit, the company was looking to set a new record in Asia with respect to installation time of a furnace. “By the furnace’s third cast, it was producing 40-ton ingots, which were the largest of their size in Asia at the time,” says Blake, adding, “and this was completed right out of the box, something that would have been impossible if not for our engineers, their own engineers, and casting machine suppliers working together towards a common goal—a successful installation of a product that works from dayone.”

It’s this kind of effort that ANDRITZ METALS puts on display in any kind of partnership it enters into, and is the reason why it’s hard to not see the company continue to grow its market presence in North America and beyond. In today’s world, most industrial companies point to either quality, innovation, or customer service as what drives their success. For ANDRITZ, however, they have it all.