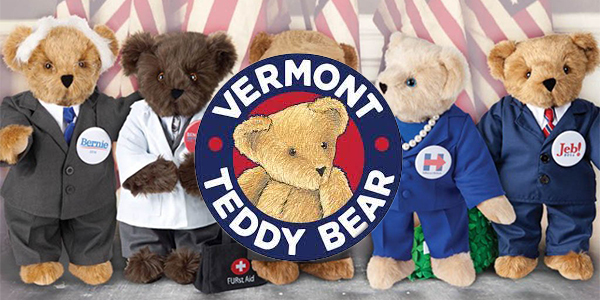 The “teddy bear,” the stuffed toy animal named after U.S. President Theodore Roosevelt, is typically thought of as a comforting companion for children, although the many varieties of the lovable stitched beast have of late become a passion of adult collectors. The Vermont Teddy Bear, however, has successfully hunted a new niche for the fabled friendly furry that at first seems a bit off-target: adult men.

Well, boys and girls, the story here is not that men as a category have gotten more in touch with their childhood feelings; rather it’s the case that the teddy bear costumed in pertinent apparel for a suitable occasion such as a birthday or holiday makes a marvelous gift for a guy’s honey. Indeed, Valentine’s Day is when most people want to cuddle up to the Vermont Teddy Bear Company.

According to spokesperson Sarah Badger, the traditional lovers’ holiday is the time of the year when sales really come out of hibernation. “Of course, we sell all year round, and the next two busiest seasonal volumes are during Mother’s Day and Christmas, but Valentine’s Day by far generates the most orders. It’s the type of gift that lasts longer than flowers, and it comes with candy, too.”

Indeed, though the company started by John Sortino in 1981 in, of course, Vermont was originally inspired as a way to bring home the manufacture of the quintessential American toy to the land of its birth, it was a customer request to mail a bear to her home that led to the Bear-Gram® that has become the company’s hallmark. Each Bear-Gram comprises a handcrafted, fully jointed American-made teddy bear accompanied by a custom-shaped gourmet chocolate (made exclusively for Vermont Teddy Bear by a nearby local company, Lake Champlain Chocolates), personalized greeting card and colorful gift box.

Sortino launched the Bear-Gram as a new gift idea for Valentine’s Day in 1990, promoting it on then highly popular New York City radio station Z-100. “The response was immediate and overwhelming,” says Badger. “Calls for Bear-Grams flooded all three company telephone lines and within the first two days Vermont Teddy Bear reached its sales goal for the entire year.” That phenomenon continues to set the corporate benchmark for success, with an advertising strategy still heavily reliant on radio, in particular shows with large male listenership on such programs as Howard Stern, Rush Limbaugh, and Bill O’Reilly; radio spots currently appear in over 500 stations nationwide.

However, over the years Vermont Teddy Bear went through a number of significant changes that has led to it standing out from the pack in the direct response gift delivery business, albeit not without losing direction of its original path. In only two years time from initiating the Bear-Gram, the company was ranked by Inc. Magazine as the 80th fastest-growing private business in the U.S.; in 1993, it was rated 58th.

Back to Basics
That same year, The Vermont Teddy Bear Company went public to help finance the design and construction of a manufacturing plant and showcase retail store, which became operational in the summer of 1995. This 60,000-square-foot facility is situated in Shelburne on 57 acres in Vermont’s picturesque Champlain Valley. In 1998, a second sewing shift was added to its Shelburne factory and in November of 1999, the company opened a satellite sewing and assembling facility in Newport, Vt. The company employs some 275 people, 70 of whom are skilled stitchers. Making the bears by hand follows the high standard of craftsmanship originally set by Sortino’s wife, who sewed the first Vermont Teddy Bears from her home.

In 2004, the company instituted modular manufacturing, which instituted teams so that workers can do a variety of different tasks, not just a single repetitive activity. “It helps improve efficiency and it gives the workers a greater sense of ownership in the final product by being involved in all stages of production,” Badger says. She emphasized, however, that the company has no intention of adopting mass manufacturing techniques, and wouldn‘t even consider moving operations out of Vermont, much less offshore. “Our name is the Vermont Teddy Bear Company, and it just wouldn’t be that anymore if the bears came from anywhere other than Vermont,” she emphasizes.

The Sortinos left Vermont Teddy Bear in 1995 to pursue other ventures. As a public company, Vermont Teddy Bear encountered some rough going in the business wilderness, including costly expeditions into retail outlets, NASCAR sponsorship and teddy bear accessories that did little to build on its core category. Under the leadership of then CFO and since 1997 CEO Elizabeth Robert, who Badger says was critical in turning the company’s fortunes around, Vermont Teddy Bear returned to its natural habitat as a private direct mail gift company in September of 2005.

That’s key to selling a product that costs about $50 and upwards past $100 compared to one that can be purchased for $30 or less from manufacturers using overseas sources. What makes a Vermont Teddy Bear better than the average bear is that, well, it’s made in Vermont, for one thing, and it is handmade. All bears have lifetime guarantees, and that includes so-called acts of God even the insurance companies don’t cover. “We recently got a call from a woman in New Orleans who was upset about losing her bears in the flooding from Hurricane Katrina,” Badger says. “She wanted to buy replacements and we told her she didn’t have to purchase anything. We sent her new ones free-of-charge.” However, higher quality isn’t the prime differentiator from other bears sold as commodities – it’s the idea of the teddy bear as a unique gift.

The “Jack” Factor
“Some people do collect the bears, and some are bought for children to play with,” Badger notes, “but the marketing focus is as a gift for any special occasion – an anniversary, a get well card, a new baby. We even had a sexy bear barely wearing a Playboy Bunny outfit, definitely not suitable for children.” Though it’s mainly a gift from a man to a woman, the so-called “Late Jack” who at the last minute needs a gift to arrive on time, it isn’t always the case. Most famously, in 1998 President Bill Clinton during the height of his personal and political crisis received a Santa’s Sweetheart Bear-Gram from a loyal supporter. (For the record, Hilary also got one.)

Within each thematic category, there are several options from which to choose, distinguished by what the bear is wearing. As an example: for St. Patrick’s Day there is a bear dressed as a leprechaun as well as three others available in different Irish garb. Badger notes that there are various selections within a particular themed category, and that usually new versions are introduced as older ones are cycled out. The company will also make a custom bear to order, though that remains a specialized niche within an already specialized segment. “Typically, someone wants the bear to replicate something about someone’s personality or to somehow look like that person,” Badger notes. Such a one-of-a-kind “Custom-Made Bear” starts at $299.

Badger notes that because they include food, namely chocolate, the Bear Grams can’t be sent anywhere other than within the 50 states, as well as ship to U.S. territories. Shipping is handled by UPS and overnight delivery – for the “Really Late Jacks” – is available.

Today, most bears are purchased on-line, though there is a mail order catalog and toll free telephone ordering. The only place you can physically buy a Vermont Teddy Bear is at the company’s factory, which is a major state tourist attraction, or at its retail store in Waterbury. “We get about 120,000 visitors yearly, and we have some very animated tour guides that take our visitors to see how our bears are made,” Badger says.

And while you can buy Vermont Teddy Bears at the factory, Badger emphasizes that the company will not venture again into retail. However, the seasonal nature of teddy bear sales has prompted ventures related to the core business. While teddy bears are offered as an alternative to flowers, the company has acquired a gift flower delivery business (Calyx & Corolla), as well as, along similar lines, PajamaGram with sleepwear delivered in a hatbox with a lavender sachet and gift card, and Tasty-Gram for gourmet foods. The latest endeavor is Gift Bag Boutique, in which designer handbags and accessories are delivered in a pink, purse-shaped box with a free lip conditioner and colorful gift card.

While these sister companies offer some bare necessities, it’s the bear market that makes for a bullish company.