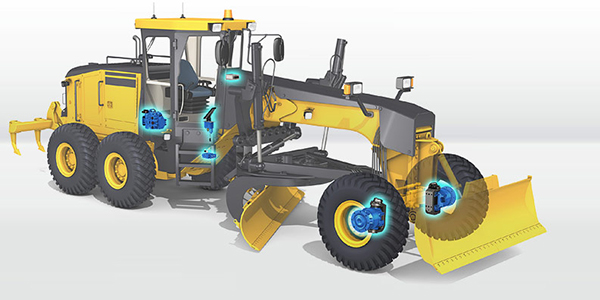 At Poclain Hydraulics, they’re all about making hydraulic motors – with a twist. That’s because nearly a half-century ago, French hydraulics pioneer Claude Bataille developed the high-torque cam-lobe radial piston motor for use on excavator swing drives, which made it easier to power the rotary motions of heavy construction equipment, farm machinery, and heavy equipment for building highways. And ever since then, the company has worked to improve on that initial revolution.

With 6 percent of sales invested in research and development annually, Poclain Hydraulics demonstrates the philosophy behind its slogan “Driving Innovation.”

“We were pioneers in the technology of radial piston motors and also in high pressure hydraulics,” said Joseph Maher, Group Marketing Manager for Poclain Hydraulics. “This has helped us in the last decade as the demand for performance from the off-highway equipment industry has increased.”

Making transmissions smart
With its North American operations based in Sturtevant, Wis., Poclain Hydraulics supplies most of the best-known names in the equipment industry and its client list is almost certain to grow with the help of a new product the company rolled out this fall, the SmartDrive(tm) Easy transmission control computer.

The SmartDrive(tm) Easy is a remarkable computer and software combination that allows OEM manufacturers of off-highway vehicles to configure their transmissions themselves according to their highly specific transmission performance needs. Using a computer system that requires no programming skills, customers can select from a range of transmission functions, including vehicle acceleration and deceleration control, cruise control, variable speed, and high torque combined mechanical and hydrostatic braking.

“We had a customer with a prototype machine that was able to have the machine up and running, with our software, in half a day once the computer was installed,” Maher said. He said the development of the computerized system would allow smaller manufacturers to have some of the same advantages of a large OEM customer.

“At the end of the day, this means that small operations – the kinds of customers that used to be left out due to electronics complexity and development cost – now can do it themselves,” he added. “We have taken our electronics innovation and made the benefits accessible to a much broader customer base.”

Its track record for innovation is the result of the unique history of the French-based company, which has remained family owned for three-quarters of a century. In 1930, Georges Bataille set up his first workshop north of Paris, which he called the “Ateliers de Poclain,” to manufacture a range of tip-carts, trailers, manure spreaders, and other types of specialized farm equipment.

In 1958, the company created a new type of hydraulic motor for use on its excavator product line, and by 1976 an entire plant was dedicated to the production of hydraulic components. By 1985, the component division became an independent company by the name of Poclain Hydraulics, which soon had a subsidiary here in the United States. But the firm’s growth in North America really took off once Poclain Hydraulics began manufacturing motors at its Wisconsin plant in 1994. During the 1990s, the firm’s sales here in the continent grew three-fold, and its manufacturing facility, near Racine, Wis. was expanded to 131,000 square feet at the start of the decade, with some $10 million in capital investment.

Maher said that the company employs roughly 200 people in Wisconsin, and some 1,000 workers worldwide. Poclain Hydraulics has 11 sales subsidiaries in France, USA, Germany, England, Italy, Spain, Netherlands, Japan, Czech Republic, China and Sweden and works with over 100 distributors around the globe. Even today, the privately held company remains a global leader in the industry. Maher said the fact that the company is still privately and family owned “is significant for us, because we’ve always been a very engineering focused company, and so we’re committed to investing in the long term.”

Unique testing ability
Much of the cutting-edge research, said Maher, is carried out at the parent company’s main facility in Verberie, France. Not only are new motors and other products developed there, but they are then tested at one of the most unique facilities of its kind in the industry. The site has more than 40 test stands installed, using over 4,100 kilowatts of power and more than 120,000 hours of tests per year. Maher said that some of the test benches operate 24 hours a day practically year ’round.

This test laboratory is complemented by the vehicle proving grounds, which allows the company to test transmission components in operation on real vehicles. Whether using a vehicle from its test fleet, or a customer-supplied vehicle, “this facility allows us to come to market with products and transmission systems tested in the actual applications for which they are intended,” Maher said.

Increasingly, Maher said, Poclain is working with electronic applications, which allows the company simultaneously to continue to customize and reduce the size of motors while enhancing their performance within an integrated transmission system. For example, SMARTDRIVE(tm) Off-Road is an electronic on-demand traction control system that operates only when needed, providing hydraulic flow control without the constant horsepower drain and heat generation of standard flow dividers. It is one of four new versions of electronic SmartDrive(tm) hardware and software dedicated to hydrostatic transmission control for off-highway vehicles.

Maher said Poclain Hydraulics considers itself a full-service company, from design through manufacturing and thorough testing and then service. Demand continues to grow, as customers need the type of power and adaptability that the company’s hydrostatic transmissions can provide.

“The trend toward increased hydraulic system pressures had been attracting customers to our heavy duty components already,” he said. “Now that we offer complete transmissions and systems integration services with electronic control, our customers can achieve a whole new level of market differentiation for their equipment.”

And given the company’s history, Poclain Hydraulics is sure to have the power for whatever twists and turns the next 75 years bring.