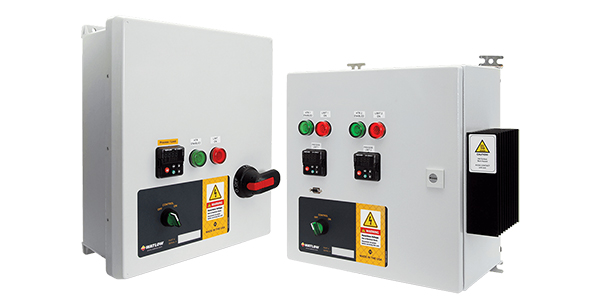 Watlow Electric Manufac-turing Company is the only designer of electric thermal systems to manufacture all of the major thermal system components — electric heaters, temperature sensors, temperature controllers, power controllers, multiloop controllers and process systems. With more than a quarter of a million synergistic designs on file, this St. Louis-based company offers single-source accountability to its global customers in a wide range of industries, including semiconductor processing, plastics processing, food-service equipment, life sciences and power generation.

The $250 million company’s capabilities extend beyond the manufacture of high-quality thermal products, however. Watlow also provides thermal solutions. Its veteran sales engineers — positioned throughout the United States, Europe and Asia — are available to help customers select, develop and purchase thermal solutions suited to their specific equipment and process-heat requirements. With the help of these engineers, customers can solve technological problems, reduce process costs and improve a product’s performance.

“We have a very competitive sales force,” says Marketing Communications Manager Lisa Ptasienski. “They all have engineering degrees and, as a result, can partner with our customers. They’re not just here to sell products; they can actually help the customer engineer a solution.”

Indeed, Watlow’s sales engineers are the customer’s bridge to factory technical assistance and local distributor service worldwide. With 2,500 employees and 16 manufacturing plants in Europe, Asia and the Americas, Watlow is ready to support a customer’s efforts on a global scale.

Hot Trends
Watlow was founded by Louis Desloge Sr. in 1922 to provide electric-heating elements for the burgeoning shoe manufacturing industry in St. Louis. Early on, the company established a reputation for product innovation. In 1923, Watlow pioneered the use of electric heat in brick presses with strip and standard cartridge heaters, replacing the more costly steam process of forming shoes. Through the years, Desloge promoted electric heat as the new and improved alternative to gas heating (difficult to control and confine) and to steam heating (expensive to install and maintain).

As its customers’ industrial electric-heating applications expanded, Watlow responded with innovative products that soon became industry standards. In 1950, George Desloge, the founder’s son, invented the narrow-band cylindrical heater with its patented clamping strap for use in plastics processing. Four years later, he invented the most successful product in the company’s history — the FIREROD® cartridge heater. Originally designed to improve heat-transfer efficiency in shoe manufacturing, the FIREROD® is now used in a wide variety of applications, including plastics, aerospace, semiconductor processing and life sciences. Since 1954, more than 500,000 FIRERODs® have been produced.

Watlow prospered and grew in the next decade. In 1958, the company began making silicone rubber heaters for the aerospace industry. In 1961, it built a second St. Louis facility with 30,000 square feet of manufacturing space. Louis Desloge Jr. joined the company in 1963 and began to build an international network of direct-sales engineers and distributors. In 1967, Watlow designed and manufactured the first high-watt-density, cartridge-pressured heater for use in nuclear power plants.

Groundbreaking products continued to fly off the company’s drawing boards through the next three decades. In the 1970s, Watlow introduced RAYMAX®‚ its radiant-heater line. It also launched a thermocouple product line for the plastics industry.

During the 1980s, Watlow introduced a number of innovative products, including its high-performance, mineral-insulated band-and-strip heater product line to improve efficiencies in plastics processing, and its first microprocessor-based temperature controller. In addition, Watlow patented the FIREBAR® flat tubular heater to improve frying productivity in restaurant fryers. It was during this decade that the company designed and manufactured the longest cartridge heater to date: 1 inch in diameter by 52 feet long.

The 1990s brought more revolutionary products, including: the THINBAND® heater with its flexible one-piece design that makes installation faster on plastics processing machinery; the FIREROD® MI lead option for high temperature and contamination resistance; the MINICHEF™ 2000, a food-industry first in a time/temperature/machine function controller; the MULTICOIL heater, the first tubular heater to combine multiple-resistance coils and thermocouples with three-phase capability; and FREEFLEX, a miniature tubing heater. Also during this decade, the company introduced film heater technology and thick-film heater technology on several substrates, including quartz, ceramics and 400 series stainless steel.

A Tradition of Progress
Today, Watlow continues the strong tradition of family leadership with the founder’s grandson, Peter Desloge, who serves as the company’s chief executive officer. It also continues the long-standing tradition of providing outstanding products that will ensure a customer the competitive advantage needed in today’s global markets. Each Watlow plant offers research and development services, from prototype development to quality certification. New designs, construction methods and materials are regularly tested. To anticipate its customers’ future needs, Watlow has dedicated a facility to the research of emerging technologies. Here, a customer’s future thermal component requirements are projected and developed.

Watlow’s Polymer Technologies unit has introduced the patented THERMOPOLYMER® heater. It is made from reinforced plastics that can be shaped and molded to provide unique thermal benefits to heated parts. Watlow’s polymer heaters can be used in numerous applications, including medical, analytical, aerospace, food-service, transportation and semiconductor equipment. Polymer technology is also useful for freeze protection and battery heating applications.

Watlow has also pioneered the first online kitchen, which employs North American Association of Food Equipment Manufacturers (NAFEM) data protocol. This standard, non-proprietary technology protocol enables bidirectional communication of relevant restaurant data between a central personal computer-based workstation, or host – which is operated by a restaurant manager – and all points of service, HVAC controls and equipment located in a restaurant kitchen. Software and hardware are combined in the ON-LINE KITCHEN® to monitor equipment operations and performance, to alert users of maintenance needs and to reduce energy usage.

Watlow is, indeed, a forward-thinking company. According to Ptasienski, Watlow will maintain its leadership position by pursuing three strategic initiatives. “We want to improve operational efficiencies, continue being a market-driven organization and expand into thermal systems opportunities,” she says. “We would like to leverage our components strength with our engineering strength. Not only can we sell you our product, we can also engineer our products into your systems.”