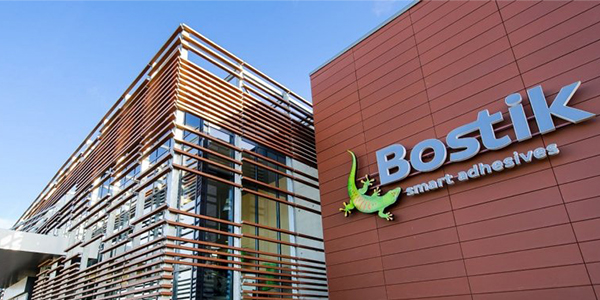 You can learn something from a company that was founded 100 years ago to make adhesives for shoes and shoe polish: There’s always another application for your technology.

So after Bostik Findley stopped making footwear products as the Boston Blacking Company, it applied its technical and chemical know-how to the adhesives market, where it invented hot-melt adhesives (today the technology behind glue sticks). Such technology was used during World War II to put parachute dummies together. After this military use ran its course, consumerism stepped in, whereby the cereal box industry began using hot melt to seal its boxes.

In its current configuration, Bostik Findley manufactures a variety of adhesives, sealants, and polymer products through three divisions: Construction & Distribution, High Performance Polymers, and Industrial Adhesives/Non-Wovens. Its Construction and Distribution (C&D) division, specifically, engineers products for industries such as flooring, construction, marine and insulating glass windows. C&D is a seven-facility operation that has been its own operating division within Bostik Findley since 1996. Here, adhesive, sealant and lubricant technology is researched, developed and sold to local ceramic tile, floor covering, hardwood, construction, industrial and specialty distributors. Its products are packaged in a large variety of sizes to offer convenience to the contractor or large manufacturing operation.

Its newest innovation is a line of industrial sealants for the marine industry. Used to bond the deck to the hull, the Simson line helped C&D topple the company that traditionally had held the top spot in this market. The technology, says Director of Sales and Marketing Richard D’Autilio, comes from Europe. “We have displaced the leading competitor with this sealant at SeaRay and Catalina Yachts, and we’re working with many other leisure craft manufacturers presently,” D’Autilio says. Simson, he explains, cures much faster and is a tougher product with no solvent; it doesn’t out-gas and doesn’t yellow. Its use also has been a boon for truck and bus manufacturers such as Prevost Car in Canada and Monaco Coach.

“In Europe,” he adds, “urethane sealants traditionally were used in industrial applications for bonding;” however, because urethane contains the harmful chemical isocyanate its use has been eliminated in this application. Simson is isocyanate-free, developed years ago by the Ato Findley arm of the company for such a purpose. (In Europe Simson sealants are used to bond windshields into cars and buses.)

In the marine industry Bostik also manufactures sealants such as Bostik 920, 920 Fast Set and the new 940 and 940FS with superior characteristics that feature “tenacious adhesion to wood, FRP, fiberglass, aluminum, metal and most plastics.” The division also produces a range of highly effective aerosol adhesives, anti-seize compounds, lubricants, epoxy, liquid adhesives, and cleaners.

For the transportation market, the company produces a comprehensive line of sealants and adhesives such as Bostik 1100, 1100 Fast Set and the new LoVoc sealant, excellent sidewall adhesives or exterior and interior seam sealants well-suited for adhering interior plywood to wood, aluminum and steel framing.

The flooring revolution
C&D’s reach into the floor installation area is equally as long. The division has become the most experienced manufacturer of flooring installation products for tile, stone, hardwood, carpet and vinyl. Product categories within this area include: ceramic tile grouts, mortars and mastics, hardwood adhesives and finishes as well as underlayments, patches and adhesives for floor covering. In a nutshell, says D’Autilio, “Our services extend to anything that is put on the floor.”

The company’s fastest-growing segment is hardwood flooring adhesives because of hardwood’s growing use in non-traditional areas such as in kitchens and bathrooms. “There’s dynamic growth in this industry,” he adds, referring to the upward movement in both home sales and home improvement. “Many people are selecting hardwood over carpet and vinyl.”

The company, he adds, has “revolutionized the industry” with its new line of urethane adhesives. Once dominant in the industry, he explains, was a non-flammable bonding product that was solvent laden. As an alternative, C&D developed Bostik’s Best, a new high performance urethane adhesive that is user and environmentally friendly. This innovation has positioned C&D in the forefront of the hardwood adhesive market.

ESP complements the company’s existing product offering, including Bostik’s Best, a one-part trowel applied, moisture-cure urethane adhesive, and BST Urethane, a breakthrough technology in urethane, offering exceptional physical and chemical properties but at a water-based price. It contains no water and will not cause cupping or end-lifting and can be used to install all types of wood flooring including solids as well as ceramic tile, marble and stone inlays.

Insulating glass
The third component of C&D’s manufacturing makeup is the insulating glass segment, an area in which its sealants are recognized for their superior performance as a primary or secondary sealant material. The company offers a full line of sealant technologies designed for suitability within the full range of application methods used by the industry.

In this category, two main products have been developed for major window manufacturers to edge-seal double- and triple-pane windows. In addition to its top quality urethane line, Bostik 3190, the company has devised a unique new sealant that exhibits the product quality of a cured sealant with the ease of hot-melt and is priced between the curing and hot-melt system. Called Bostik 7190, the product is set to hit the market in May. Bostik Findley fills out this product line with its hot melt butyl offering called Bostik 5197.

Two histories
The C&D division can count itself a part of an illustrious history in the manufacture of adhesive and sealant technology. From its beginning, Bostik built its success on innovative adhesives. Founded in the late 19th Century as the Boston Blacking Company, renamed as B.B. Chemical in 1950 and formally becoming Bostik in 1972, the company was a pioneer in the development of adhesives for the emerging footwear industry. Throughout the 1900s Bostik’s product line grew and became more diversified under the ownership of various organizations including USM Corporation, Emhart, Black & Decker, and ORKEM. In 1990 Bostik was purchased by TOTAL, a petroleum oil company based in Paris, France. Later that decade TOTAL purchased Belgium based PetroFina forming TotalFina in 1999.

Ato Findley came forth with a similar background. It was founded in 1911 when Frank G. Findley purchased the Wisconsin Paste Company, a manufacturer of wallpaper and billboard paste. In 1917, the company became known as F.G. Findley Co. and later Findley Adhesives, Inc. Through the years, in an effort to grow sales, the company’s technologies became more sophisticated and it began to serve new and different markets. Being a customer-focused supplier and a technological leader led to global expansion through new manufacturing sites and joint-venture liaisons. In 1996, the company was bought by Elf Atochem, a subsidiary of Elf Acquitaine, thus the formation of Ato Findley.

In 2000, TotalFina purchased Elf Aquitaine and the two U.S. adhesive companies, Bostik and Ato Findley became one. Bostik Findley now is among the world’s largest adhesives and sealants manufacturers with production facilities (many of which are ISO-9001 & QS-9000 certified) and sales operations in 41 nations across five continents.

Toward more friendly adhesives
Under the Bostik Findley umbrella, C&D maintains seven facilities that produce some of the world’s most effective sealants and adhesives. In Paulsboro, N.J., flooring products are made; in Huntingdon Valley, Pa, sealants are manufactured. Adhesives for the industrial distribution group are made in Marshall, Mich. Two plants in Conyers, Ga., make flooring products as does a third facility in Rockdale, Ga. Flooring products are also made in Temecula, Calif.

In his division, D’Autilio notes, the biggest trend involves the West Coast; specifically, the state of California’s drive to control the volatile organic content in the product. The South California Air Quality Management District regulates volatiles in adhesives to make for greener and environmentally friendly products. “In the last two years,” he says, “we have redesigned the majority of our products and also undertook a product-by-product reformulation to reduce volatiles.” The entire industry needed to be compliant by Jan. 1. D’Autilio adds, “For us it represented a significant investment, a lot of R&D man hours.”

It seems appropriate for a company that has pushed itself into the forefront in the manufacture of sealants and adhesives also would push itself to make products that are kinder to the environment. Such responsibility only comes with time-tested adherence to rigorous goals, and perhaps a mission to never get stuck doing things the old way.