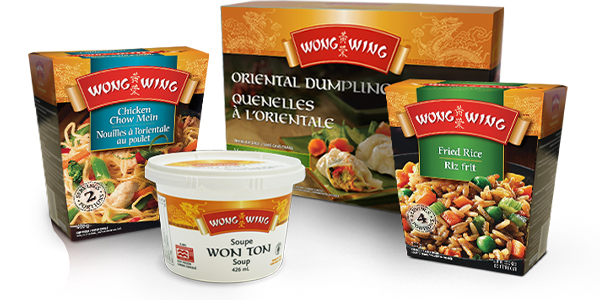 Wong Wing’s food packaging is today one of its selling points, consisting of two big yellow banners that represent the sun, a red logo that honors the color of China and a sunrise containing China’s ubiquitous icons: dragons.

But packaging wasn’t always important for Wong Wing; in fact, at the outset of the company’s Chinese food enterprise, packaging was non-existent.

“Sam Steinberg, who was the founder of the biggest grocery store chain in Montreal, gave Marcel Wong the chance to sell Wong Wing products in his store,” relates Director of Marketing Julien Roel. These products were mainly egg rolls, fried rice and dry garlic spareribs. The contract was finalized by a handshake between the two businessmen. Problem: The young company had no packaging – that is nothing formal in the way of containers – so its owners collected any sort of box they could get their hands on, stuffed them full of food products and shipped them to the store where they were purchased right from their containers and bagged.

“It was at the beginning of the Chinese food industry in Canada,” Roel notes. “There were restaurants but nothing sold yet in supermarkets.”

In its infancy, Wong Wing Foods was run from essentially a two room operation in the heart of Montreal`s Chinatown, the brainchild of Marcel and Lucille Wong, brother and sister, who founded the company in 1948, upon Marcel’s discharge from the Navy. Chinese food had, by this time, become one of the first popularized ethnic cuisines adopted by the mainstream. In fact, a recent article from the Poughkeepsie (N.Y.) Journal detailing an exhibit at the Museum of Chinese in the Americas gives a succinct synopsis of the history of this cuisine in the Americas: “Early on even the tamest of Chinese cuisine – think egg drop soup, shrimp with lobster sauce and crispy noodles – was cutting edge in an America built on European traditions and foodways. Restaurateurs had to be careful, and in this they were astute: Because for a generation of Americans, the Chinese restaurant was the first – and sometimes only – gateway to Asian culture.”

Having found their own gateway to success at Steinberg, the Wongs gained more exposure at Montreal’s Expo ’67, where Wong Wing sold bobo balls, or chicken wrapped in batter; these are now called chicken balls. Then came the annual CN exhibition in Toronto, which also opened doors for the company. From there the egg rolls multiplied.

A full line of products
The company’s name is derived, of course, from the founders and from a man named Wing with whom they were associated. With money being tight it was Wing who provided the company’s first production plant. A few years later the Wongs were able to buy out Wing’s shares.

By the late 1950s, Wong Wing had obtained “Canada Approved” status as a federally inspected meat plant and in 1973, the company moved to the present location. Since that time there have been at least four expansions made to the original building. In 2002 Wong Wing was sold to McCain.

The company’s product lineup includes all the popular Chinese foods such as the popular General Tso’s Chicken, a sugary-spicy melange of dark-meat tidbits, deep-fried then fired up with ginger, garlic, sesame oil, scallions and hot chili peppers. It was named after General Tso Tsungtang, a military leader during the waning of the Qing dynasty. Other food products include favorites such as fancy egg rolls and spring rolls. The company maintains its Montreal operations and its place as a Chinese food producer has been well established, which positions it to aptly serve a Canada demographic that is showing a new zest for Chinese food. “Chinese food is now trendy; it’s number one in Canada as far as ethnic cuisine,” Roel says.

Roel also notes that because of perennial problems with Chinese restaurants, particularly involving cleanliness, Wong Wing is also poised to make further inroads. “We’ve realized that we have to be better.”

Among the company’s most recent milestones is a total redesign of its packaging that better positions the brand on supermarket shelves. With each package now synchronized with the same images – yellow banner, red logo, sunrise and dragons – products are easily recognizable as being from the kitchens of Wong Wing. An additional feature: all packages come with chopsticks to further embellish the Chinese cuisine experience. “With the new image we’re selling like crazy,” Roel says.

The company furthered its position with the acquisition in 2003 of Belleisle, a maker of eggrolls in the Atlantic region.

State-of-the-art production
During the past 30 years, Wong Wing has continued to thrive by developing most of its own machinery and technologies. Its manufacturing facility consists of a production area of 37,571 square feet, warehouse space for dry storage and sauce storage measuring 31,095 square feet and a 14,905-square-foot freezer. Other features include the development of atmosphere-controlled rooms on the premises for storing cabbage to supply the company with cabbage year-round, enabling Wong Wing to use fresh cabbage even when it is impossible for farmers to provide them with it. Wong Wing also designed and installed machinery for manufacturing egg roll dough on the premises. This dough allowed for a fully machine-made egg roll. In the late 1980s Wong Wing entered the private label market for egg rolls, sauces, and Oriental appetizer packs.

“Our machine made egg rolls, spring rolls and chicken balls still have a homemade quality because we try to use authentic Chinese recipes, in terms of the spices and overall flavor,” Roel says. “We have overcome problems with moisture control in our fillings that needed to be controlled when we switched from hand-rolled/filled egg rolls to machine-made ones.”
Other advances in its products include a decision in 1989 to modify its recipes to remove monosodium glutamate (MSG) from almost all products. Notes Roel, this was done because of the negative connotation associated with MSG in Chinese food products. “MSG contributes a lot to taste,” he adds. “We were able to drop the MSG without sacrificing taste and with no significant drop in sales.”

Also, he notes, “We have the only frozen won ton soup on the market in Canada. Its made in an authentic fashion, very close to homemade even though the dumplings are machine made.”

With its place now firmly established Wong Wing is seeking to further edge out its competition by sticking to the recipes and processing capabilities that have given it its distinction. “We aim to be the best manufacturer of Asian Food in Canada,” Roel says. “Wong Wing is the new meal solution, authentically Asian, and a real delight that is out of the ordinary.”