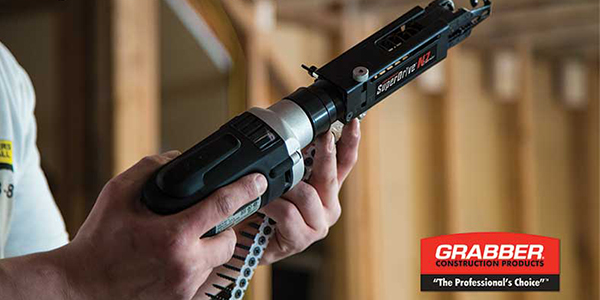 Most people, even those who do a lot of work around the house, don’t give much of a second thought to a basic item like a screw. Luckily for the world of construction, John “Brad” Wagner is not one of those people.

Ever since Wagner started selling construction supplies as a sales rep for a major company in the late 1950s, he has worked on developing new kinds of screws that would be better than what was available to use on drywall, in steel construction, with power tools and in difficult environments.

Today, Wagner himself is well known in the construction world, but the unique company that he founded, Grabber Construction Products, is known even better. The names of Grabber’s top selling screws and related products – the Streaker screw. the LOX recess and bit system and, of course, the Grabber screw tell a colorful story of Wagner’s long efforts to solve problems in commercial and residential construction.

‘One step ahead’
About 10 years ago, Wagner, who has a second home in Hawaii, learned that construction contractors in the Aloha State were having some problems. “They were having serious problems in Hawaii, which is 90 percent steel frame construction, both commercial and residential,” Wagner said.

Workers on those metal frames said they were quickly burning through their drill bits. At first, Wagner looked for a torque fastening system, but when he couldn’t locate one that matched his high expectations and standards, so he decided to develop his own. For several years, the Grabber Construction founder worked to create a recess and driver bit that would take full advantage of the power tools used to drive the screws, but would also last much longer than traditional designs Wagner spent considerable time in job sites in Hawaii, testing out his ideas. The result was the LOX recess and bit system, a technologically advanced driver system engineered for high-torque applications that has now been patented worldwide.

“We’ve always prided ourselves on being visionary, and staying one steps ahead of the competition,” said the founder’s son, J.B. Wagner, who is now the Chairman of the Board and a Vice President of the company.

Today, GRABBER Construction Products is a global company with a strong presence in many regions of the United States. Grabber also does business in Canada, Europe, Japan and South America. Headquartered in Concord, Calif., it is one division of a broader enterprise called John Wagner Associates.

Over 400 employees work for the JWA parent company, and Wagner said that more than 300 of these work for Grabber Construction. The company has remained in the Wagner family, although company workers own over 40 percent of the corporation through its Employee Stock Ownership Plan (ESOP). Not only is the company a leading international distributor and manufacturer of premium fasteners and fastening systems for wood, metal and drywall applications, it also distributes a wide range of tools and equipment.

Founder Brad Wagner earned his engineering degree from Rensselaer Polytechnic Institute, and in the early years of his career, when he was working for Hilti selling anchors and fasteners out of Buffalo, N.Y., and later from northern California, he began to work on his own products, starting with a plastic anchor. By 1967, he had founded his own company.

Building the Twin Towers
Meanwhile, the construction industry was changing rapidly. More and more buildings relied on steel construction, and Wagner took it upon himself to develop new fasteners to solve some of the new problems that construction crews faced. His biggest breakthrough came in 1974, when he developed and patented the Streaker Drywall Screw, which revolutionized the attachment of drywall to steel studs.

Years later, Wagner is still very proud of that invention. “It was good,” he said. “It drilled into light gauge steel, 22 and 25-gauge, effortlessly.” He said his competitors came out with their own versions but “the others were a lot more expensive and not as good – workers didn’t like them.” The screw that gave the company its name, the GRABBER, was used heavily in the construction of the World Trade Center. Wagner is also credited for having created the first 4,000 rpm screw gun and the first layout level, among other major new developments in construction technology.

J.B. Wagner, the current Chairman, said that while the company has always been profitable, 2004 and 2005 were two of the best years in the history of Grabber Construction. Ironically, some of that success was the result of high commodity prices for steel, because Grabber had locked up a long-term agreement with a supplier in Taiwan. “We had a constant supply, while others didn’t and they got caught scrambling,” Wagner said.

The company has also strengthened its distribution, particularly with the addition of a 15-year agreement to distribute No-Coat branded products from an Oregon-based manufacturer. The cornerstone of the No-Coat line is drywall corner technology that has evolved from a niche product to an entire system. No-Coat structural drywall corners are up to seven times stronger than traditional metal corners while No-Coat’s innovative UltraFlex product creates perfectly straight lines in interior corners of walls and ceilings. But Grabber Construction has not lost sight of what built the company, and that is its innovations in the area of fasteners. Earlier this year, it began manufacturing a new line of the finest wood screws for commercial, residential and do-it-yourself wood applications. Its revolutionary technology combines the high torque features of the new patented LOX recess and bit system with a heavier gauge wire, a type 17 thread and the QuickGrab point, creating the ultimate all purpose wood screw.

Making decks better
Today, Grabber Construction innovations cover a wide range of construction issues. One of the company’s top lines is its Deckmaster hidden deck fastening system, which works with both wood and composite decks. The system’s stainless steel or powder coated brackets provide decades of support but hidden from view, boosting the attractiveness of decks.

Another leading system pioneered and marketed by Grabber Construction is the SuperDrive, an auto-feed fastener system that makes work easier and faster for construction crews in a wide array of applications including subfloor attachment, fastening drywall to wood and metal and modular home construction. Wagner said that the SuperDrive product line now brings in about $12 million in annual sales and is a key product line of
the company.

Company officials at Grabber Construction are optimistic about the future, and why wouldn’t they be? As long as construction crews are out there fastening one piece of material to another, Grabber will be thinking up better ways to get the job done.