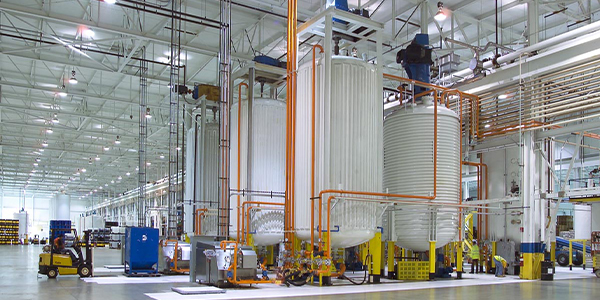 Chemtool, Inc., has done something seemingly impossible so far in the 2000s: substantially grow its business of supplying grease and other key lubricants to the automobile industry, to steel mills, and to other heavy industrial factories that have for the most part been reeling since the new century began.

Dan Karagozian, the vice president for sales and marketing for the Illinois-based company, estimates that annual sales, which are roughly in the area of $100 million, have grown by 40 percent in the last three years.

What is Chemtool’s secret? “We’re taking business away from our competitors – that’s what we do,” said Karagozian, who acknowledged there is “no new business” in the industries in which Chemtool has excelled for the last four decades. He said that while many customer-supplier relationships are based largely on price nowadays, Chemtool still employs a sales force that excels in dealing face-to-face and supplying customer service and value. The result of that hard work is that Chemtool, headquartered in Crystal Lake, Ill., is now the nation’s largest supplier of industrial grease and is also an industry leader in metalworking fluids and in die casting lubricants.

Caterpillar biggest customer
The company has come a long way since its creation in 1963 by an entrepreneur named James Athans who was barely out of college and who initially worked mostly on the new company at night. The company’s initial focus was on metalworking fluids that could be used as coolants or for removing metal. Chemtool’s first major client, Caterpillar Tractor, is still its biggest customer 40 years later, and Athans is still the company owner and CEO. His son, Dean Athans, is general manager and runs the day-to-day business while his son-in-law, David Klesmith, is CFO.

Over the years, Chemtool dramatically expanded its client list along with the growth of heavy industry, especially in the Midwest. It supplied fluid to Indiana-based Inland Steel, to boating giant Mercury Marine and to Briggs and Stratton, the small engine manufacture.

Chemtool is both a manufacturer and a custom formulator of greases and lubricants. Much of the firm’s work involves taking mineral or synthetic fluids and adding chemicals to make formulas that are specifically geared toward a particular customer or industry. In addition to grease and metalworking fluids, it manufactures and markets die-casting lubricants, hydraulic fluids, rust preventatives, heat treat fluids, drawing and forming lubricants, water treatment chemicals, and cleaners. The company’s core competency is in water and oil based technologies.

Saving ISPAT/Inland money
A good example of how Chemtool works in tandem with its customers involves one of its major clients, ISPAT/Inland Steel. As late as the 1970s, preventative maintenance at ISPAT Inland’s caster complex in East Chicago, Ind., included pulling the bearings and replacing the segment rolls with new bearings – even though that meant bearings at $1,000 each were thrown away whether or not they were in good shape. This practice cost ISPAT/Inland millions of dollars annually.

Finally, in the 1990s chemists from Chemtool studied the situation and determined that the problem was hard, corrosive water at the plant. The firm developed a high performance lubricating grease specifically for ISPAT/Inland that protected the bearings and allowed for longer service life.

Indeed, the company today has a division called Fluidynamics that offers a broad spectrum of customized management services to solve the problems of buying, storing, using, recycling, or disposing of fluids, oils, chemicals, lubricants and greases – with the goal of lowering total costs. Typically, the company will place full-time specialists inside a plant that utilizes a Fluidynamics program.

Another division of Chemtool has been recently renamed the Chemical Services and Distribution Group (CSDG). It works to package and distribute all of the chemical needs of companies for their aftermarket dealers and customers. “A customer’s dealer will order various parts and chemical products through the customer’s system,” Karagozian said. “The part numbers coded as lubricants or chemicals will come directly to our distribution facility and will be direct shipped to the dealer. We handle the complete job, including private label packaging, warehouse and distribution, hazardous documentation and logistics. In some cases we assist in the marketing efforts as well.”

As Chemtool has grown, so has the number of company facilities. The main headquarters in Crystal Lake, which looks more like a research and development campus than an industrial plant, has 145,000 square feet of manufacturing space on 60 acres of landscaped property. There is a smaller, 30,000-square-foot facility in Milan, Mich., which is slated for expansion, while a large, 150,000-square-foot manufacturing facility to service the West Coast and Asia was opened in Tehachapi, Calif., in 1998. The company employs roughly 235 people at all of its locations.

Karagozian noted that the company also operates a distribution center in Diegem, Belgium, and added that Chemtool is looking to do more to expand its business in Europe and Asia. “We will be looking to build a new manufacturing facility in one of these market areas,” he said.

Given the slowdown in its core areas like auto manufacturing and steel, Karagozian said Chemtool is also looking to increase its sales in two areas that seem to be more recession-proof. One of those areas is lubricants for the food industry, while another is water treatment. “We still need clean water,” he said. In spite of the sluggish economy, Chemtool is looking for a site near its current location northwest of Chicago for a new headquarters building and is also seeking larger manufacturing facilities at Crystal Lake, where many products are manufactured.

But Chemtool’s main asset continues to be its customer service. “Our biggest advantage is that we’re very aggressive with ownership involvement,” Karagozian said. “If you needed something now, you could make a call and we’d get that product out the door. For the others, it takes two weeks. But we’ve succeeded by being flexible – with a well-trained outside sales force that includes both direct sales engineers and sales representatives.”