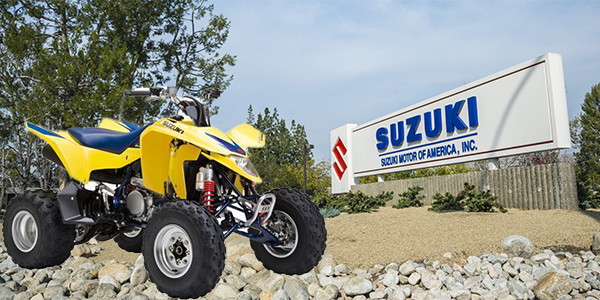 While Suzuki’s brand identity is synonymous with motorized transportation, most people probably don’t know that the company was originally founded in 1920 to manufacture textile looms. In 1952, it started making motorized bicycles powered by two-stroke engines and three years later got onto four wheeled automobiles, pioneering such innovations as four-wheel suspension, rack and pinion steering and front-wheel drive. Although Suzuki would eventually become a major automotive supplier to North America, it first entered the U.S. market in 1963 with its motorcycles. Twenty years later, Suzuki combined its two-wheeling with four-wheeling innovations to make the first “quad” all-terrain vehicle (ATV) in the U.S. “The Suzuki QuadRunner was our response to the somewhat problematic three-wheeled ATV that was popular at the time,” explains Glenn Hansen, communications manager. “The four-wheel design provides a steadier base and decreases the likelihood of the vehicle overturning. In addition, Suzuki as well as all the major ATV manufacturers voluntarily developed a set of stringent safety guidelines and promoted the establishment of user groups to promote rider safety. At the time, that was part of a consent decree with the U.S. Justice Department in response to the safety issues and high accident rates associated with three-wheeled ATVs. Today, nobody makes three-wheeled ATVs, and although the consent decree expired in 1998, we continue to adhere to the guidelines and vigorously promote rider safety education.”

Suzuki ATVs are sold through an authorized network (which typically also usually carries the company’s motorcycle line) of some 1,200 dealers nationwide. Whenever anyone purchases an ATV, the dealer helps the new buyer enroll in a rider-training course offered by the independent, non-profit ATV Safety Institute. As an incentive, purchasers will receive a check for up to $100 for successfully completing the course.

Hansen points out that it is difficult to determine from statistics alone the effectiveness of the safety campaign. “It’s not fair to compare the total number of incidences, because ATV use has become tremendously popular over the last 20 years. Because there are more users, statistically the number of accidents will increase. Of course, zero accidents is everyone’s objective,” Hansen adds. “Unquestionably, today’s ATV is safer than what was first on the market.

According to the ATV Safety Institute, 15 million Americans ride ATVs, primarily (70 percent) as a family recreational activity. ATVs are also used in a variety of farming, security, and snow removal applications. The median owner age is 40, is predominantly male, married, and a professional.

Happy Trails
“ATV racing as well as trail riding has just begun to become popular,” Hansen says. We are working closely with some ATV trail organizations, primarily to sponsor events and promote the proper and responsible use of the trails. We do this primarily through our dealers. As a corporation, we do sponsor a race team in what is becoming an increasingly popular sport akin to MX (motocross) bike racing.”

According to ATV Source, “Team Suzuki/ Yoshimura ATV features…Doug Gust, a 39-year-old veteran out of Salem, Wis., (and) a two-time Pro-class Champion ready to prove that he has the skills, strength and speed to regain the title he last won in 2004. Gust finished the 2005 season in second place overall. During the season, Gust played a large role in helping Suzuki design and develop the new QuadRacer LT-R450 he and his teammate will race in 2006.” The QuadRacer is designed for racing with a wide track chassis with high-performance suspension, tires and wheels and features a fuel-injected 450cc four-stroke engine based on the championship-winning RM-Z450 MX bike engine. According to the manufacturer, the all-new LT-R450 makes ATV racing affordable with a machine that is “race-ready” right off the dealer floor.

Varied Uses
Hansen notes that the price of an ATV depends on its features. And Suzuki offers ATVs with different features packages and at different prices. “The small farmer in Missouri will find a vehicle in the $3,000 range that’ll perform to what he needs. The rancher in northern Montana who has to cover longer distance and might need it to plow snow might be looking at the $7,000 price range. The racer, in contrast, has a whole different set of needs and Suzuki has a new race-ready ATV priced at $7,300.” Suzuki also makes lightweight ATVs especially for younger riders featuring low seat height designed for beginners. In addition, Suzuki makes a variety of aftermarket accessories, including “bolt-ons” ranging from bumpers and lights to plows and winches and a line of riding gear and accessories.
One thing that distinguishes Suzuki from other ATV manufacturers is its fuel-injection technology. “The industry still relies on air carburetion,” Hansen says. “We’re a technology leader that is still price-competitive, which may explain why, during an overall slowing of the industry in 2005, with an overall four percent decrease in sales, Suzuki experienced a two percent growth in volume.”

He adds that as ATVs have grown in popularity, Suzuki has had to address Environmental Protection Agency (EPA) guidelines for both emissions and sounds. “We do want cleaner burning engines and we are researching the use of alternative fuels such as ethanol for ATVs. Also, we want ATV owners to respect their neighbors and we want to keep noise levels as quiet
as possible.”

Increased Competition
Suzuki Manufacturing of America Corp., is located in Rome, Ga., about 60 miles northwest of Atlanta, on 35 acres that is home to a 100,000 –square-foot manufacturing facility. The company employs about 150. And while Suzuki remains a mostly Japan- based manufacturer, it is beginning to see the effects of other Asian imports to the U.S. “We’re paying much more attention to Chinese and Taiwanese manufacturers who over the last five or six years have begun distributing here,” Hansen notes. “Basically there are a larger number of smaller players selling to smaller retailers. What they’re offering is lower price, though whether they can also offer equivalent performance, service and durability remains an open question.”

Suzuki’s response is twofold. “First, we support our customers by providing the most affordable product with the best performance for what they want to do with it. Secondly, we support our dealers by both helping them stimulate sales and to service the users of our product. You can’t beat a strong dealer network that’s offering a highly dependable product with proven high-performance technology at the right price. That’s why the history of our growth over the years has typically been at a double digit rate.”

This explains how a company that was originally in the loom-making business today can offer a looming strategy for success in personal and fun transport.