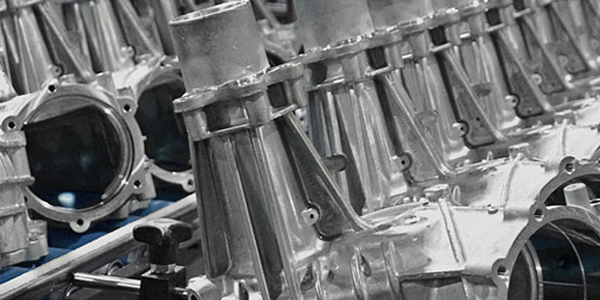 Every industry is subject to change. An individual company’s success depends on how it adapts to the ever-present climate of change in its own marketplace. The die-cast industry is no different, says Rod England, director of finance, sales and administration at Trace Die Cast, a manufacturer of aluminum die castings for the automotive and lawn-and-garden products industries.

Recent years have seen rapid consolidation, England says, “driven by the increased demand for die-casting capacity, with a simultaneous increase in OEM demands for lower cost.” The trend has resulted in the formation of four or five large conglomerates serving primarily as Tier I suppliers to the automotive Big Three. But as some companies have gone the route of trying to gain economies of scale in order to offset ongoing price reductions, he says, Trace Die Cast has taken a more direct route to securing its future.

“These companies struggle to maintain the intimate hands-on interaction that is necessary in the manufacture of die castings,” England says. “But this will create opportunities for medium-size die casters that can demonstrate the ability to grow and offer value-added services that go beyond cast and trim operations.” Trace has, indeed, taken advantage of these opportunities. The company has averaged 20 percent growth in annual sales over its first 10 years of operation, a fact Trace executives attribute to its focus on adding value for its customers. For Trace, this means establishing long-term, solid relationships with a relatively small customer base.

The company’s transmission-related capabilities include transmission housings, transmission components and transfer-case housings. Trace’s products are well positioned for new opportunities in the automotive industry, especially in the growing market for sport utility vehicles (SUVs). These manufacturers are being pressured for lighter-weight, stronger and more energy-efficient vehicle designs, in which Trace’s aluminum die castings play a prominent role.

Trace has developed a growing list of satisfied customers through its ability to innovate and enhance the design and process quality of automotive castings. Now, Trace is taking the process to another level, providing secondary operations such as machining, assembly and other finishing work.

Before any work is done, however, there is a focus on design. Trace believes that effective engineering efforts begin at the earliest stages of program development. England says, “Our engineering input ideally begins with design assistance, long before Trace or its customer is awarded the job. We believe our up-front input can reduce our customers’ costs and time to market.”

Trace’s engineering department uses a variety of computerized modeling tools including Unigraphics, Catia and Pro Engineer. The company also tests die design capabilities with the use of Magmasoft, a metal fluid flow simulator. “This process tests cavity fill via heat transfer to identify potential problem areas before the design is finalized and the tool is built,” says England.

From the (Out)source
In recent years, the automotive industry has been moving toward modularization, or the purchase of finished “drop-in” components rather than individual parts. According to England, as OEMs continue to reduce costs and refocus efforts on vehicle design, assembly and marketing, they are increasing the amount of components that are outsourced.

Recognizing how the current trend would affect the future of its business, Trace recently purchased a 27,000 square-foot machining facility adjacent to its Bowling Green, Ky., facilities. The site is easily expandable and accommodates an ultramodern machining facility, England says. In addition to the new building, state-of-the-art CNC machining centers are being installed to provide a high level of technology to accommodate a wide range of applications and volumes. “These additions will allow Trace to provide cast, machined, assembled and tested components directly to the automotive user plants from our location without the need of additional outsourced services,” England states.

Trace currently supports 24 HPM and Buhler production cells. Buhler die-casting machines, known the world over for being one of the most advanced die-casting machines on the market, allow Trace to cast parts that many other facilities are incapable of casting. The company currently has three 950-ton machines and five 1,200-ton machines in house. Rounding this equipment out with HPM die-casting machines gives Trace the flexibility and reliability needed to meet its customers’ needs as they grow. Currently, the company uses five 600-ton, seven 900-ton and four 1,200-ton HPM machines. The current infrastructure allows for easy expansion. Trace’s long-range plans include the ability to accommodate up to 50 die-cast cells on its current site.

As any company expands its services, finding qualified workers is of utmost concern. For Trace, this means counting on a strong human resources department to recruit and train new employees. “We have a diverse, non-union work force that has grown tremendously since 1988,” the company notes. “We began with 10 employees in 1988, increased to 170 employees by 1997 and currently employ 260 individuals.”

Learning for Growth
With such rapid growth, training has become an integral part of the company’s effort to provide a stable, well-trained and efficient work force. “We feel that our employees’ ability to perform their job duties is the closest link that we have to our customers,” says the company. As such, Trace offers a variety of in-house courses for its employees.

Basic Die Cast Training is a 16-hour new-hire training program covering various die-casting issues, including quality defects, machine operation, production reporting, hydraulics and electrical systems. The company also runs the Pay-For-Knowledge Program, an ongoing, on-the-job-training program that directly links pay to skill levels in each department. Employees also have the choice of courses leading to certification as a quality technician. Additional courses are offered in die setting, metal handling, blueprint reading, computer basics and management/supervisory development. A recent 7,500 square-foot expansion to its existing office area has made more room for dedicated training programs, and has doubled the size of the engineering work area.

With an emphasis on engineering, training and quality production, Trace has developed a strong customer base that includes General Motors Powertrain, BorgWarner Automotive, Linamar Corporation (also profiled in this issue) and Tecumseh Products Company. As Trace pushes into the new millennium, England says the company will continue to focus on continuous process improvement, defect-free products and on-time deliveries. “As a result, we will have satisfied customers,” he says. This is how Trace will adapt to the ever-changing business environment, and how it will lead itself to future success.