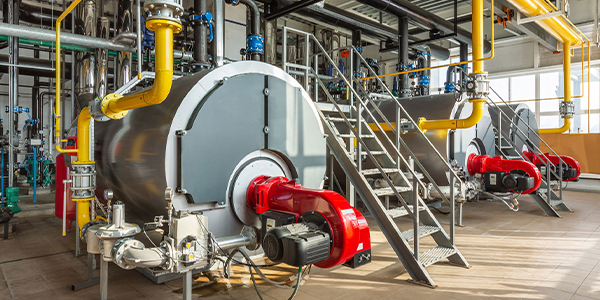 In an industry that is often seen as somewhat old-fashioned, English Boiler and Tube, Inc., of Richmond, Va., sees itself as an innovator. In fact, the company is most proud of its status as an innovator. “At English Boiler, we are dedicated to not only improving but defining what is state-of-the-art within the industry,” says National Sales Manager Vince Sands.

The company started in 1963 as the Sam English Company in Richmond to provide boiler erection and services for gas, oil and solid fuel fired boilers. . The company eventually grew to develop its own pressure parts manufacturing business to support construction crews in the field. Throughout the 1970s and 1980s English Boiler performed contract fabrication services to other boiler manufacturers. The company’s servicing of competitors’ units provided it with a unique insight into new boiler construction, which led to the development of its own boiler. English Boiler and Tube, Inc. was created in 1991 specifically to compete in the packaged watertube boiler market.

Post-modernism
Sands explains that the fundamentals of the packaged boiler industry date to the middle of the 19th century, and many companies still rely on equipment designs that date back to the 1950s and before. English Boiler has contributed to what Sands calls two significant accomplishments to the industry: the development of the “S”-type boiler and the development of the “Shop Modular” boiler system.

The “S”-type watertube boiler is the first new industrial watertube boiler arrangement to be introduced to the industry since the 1950s, says Sands. This boiler reflects the end result in an effort to design a new, modern watertube boiler that includes the best characteristics of existing boiler designs while engineering out the undesirable characteristics. The “S”-type boiler was designed to meet or exceed the design and performance requirements of any packaged boiler specification. A great deal of thought was given not only to the theoretical aspects of the design, but also to an understanding of the practical realities of an industrial boiler application, Sands notes. The design allows for easier maintenance by incorporating features that reduce downtime. “Our efforts have been rewarded with the issue of both U.S. and world patents on the design.” Sands says. “It is also our best selling product right now, accounting for more than 80 percent of our current business.”

English Boiler’s Shop Modular system reflects a different approach to new boiler plant procurement. The historic way to construct a completely new plant was for a customer to hire an engineer to design a plant, solicit quotes from numerous equipment vendors for not only the boiler but all of the support equipment, deal with any number of contractors at the site, build all of the individual components and hire another engineer to ensure all of the interconnecting components can actually work together as a single system. A new system to be installed outdoors would necessitate hiring yet another contractor to construct a new building to protect the system. Explains Sands, English Boiler has simplified this process by taking a single source approach to the problem. In a Shop Modular system, English Boiler not only builds the boiler but also procures all auxiliary equipment, engineers the complete system, and then fabricates all of the components onto structural steel base frames at its factory. All the piping and wiring is accomplished, which provides the customer a few key terminal points to be connected to in the field. Weather enclosures also are supplied, eliminating the need for a site-building contractor.

“The typical Shop Modular system requires the customer to provide nothing more than a prepared foundation,” Sands says. The boiler system is delivered to the site in as many modules as is required for the particular application in much the same way a modular home is delivered to a site. The modules simply bolt together, providing the customer with a factory complete system requiring only the supply of utilities to the module.

“The Shop Modular system is significantly less expensive than a conventional steam plant construction,” Sands continues. The engineering process is streamlined and the fabrication cost is significantly reduced. Quality is also higher, Sands notes, as the modules are built in a weather-protected factory, not at an exposed site. The single point of construction makes execution of the system much easier for the customer, and greatly reduces the start-up issues associated with the reality of multiple engineers, contractors and vendors all trying to coordinate a common system.

Keeping costs down
It is this same idea of keeping costs in check as much as possible that Sands sees as one of the industry’s main trends right now. “We feel the need to provide higher performance at a lower price,” Sands says. “What we’ve been able to do is provide customized performance at commodity pricing. We’ve established a trend that our competitors are now attempting to follow.”

This value-added approach to business is what sets English Boiler apart from its competitors as well, Sands adds. “The industry had been stagnant for so long that our competitors have found it difficult to adapt to the changes we are initiating in the marketplace,” he says. “The ability to not only patent but to gain strong acceptance in the industry of the “S”-type boiler has placed our competitors into the position of being unable to compete on a level playing field.”

Another concept that sets English Boiler apart from its competitors is its philosophy of a positive-only approach to sales. “It is disappointing that many of our competitors depend on a negative approach to sales, directed at all competition,” Sands notes. “English Boiler does not permit any negative selling by any of its staff or manufacturer representatives. We earn sales based solely on the merits of our product offerings,” he continues.

And it appears this approach has worked. Sands emphasizes that even in a steadily declining market, English Boiler has earned approximately 30 percent of the total market share. English Boiler and its two largest competitors combined account for more than 90 percent of the newly packaged watertube boiler market in the United States.

In-house work
All of English Boiler’s work is accomplished at its manufacturing facility in Richmond, Va. The complex boasts 175,000 square feet of space, including offices and fabrication area. English Boiler fabricates almost all of the components of the boilers itself at this facility, utilizing a staff of more than 50 engineers, craftsmen, managers and support staff. Sands notes that the plant uses modern manufacturing equipment.

“Maintaining the highest quality and most competitive pricing has led us to develop the machinery and processes required to maintain as much of the fabrication of a packaged boiler as possible within our complex,” Sands concludes.