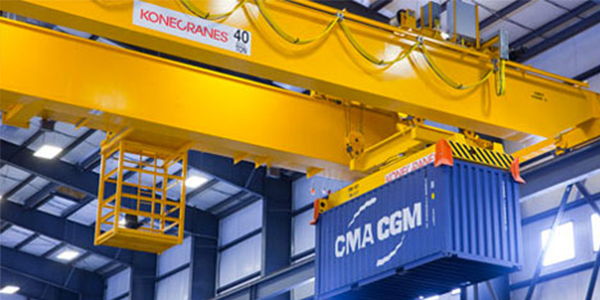 If an auto mechanic routinely does a great job fixing your car, you would probably be interested if he tried to sell you a new one. It’s a simple concept that’s even truer in the overhead crane industry, where KCI Konecranes’ Americas Region, a part of the giant Finnish-based world-leading supplier of heavy-duty cranes for process industries, has hoisted its market share by emphasizing service.

With nearly 70 locations in the United States, Canada and Mexico, KCI Konecranes’ Crane Pro Services unit and its highly skilled technicians – who receive more than 8,500 hours of training – are never more than a couple of hours away from an emergency repair job. Tom Sothard, KCI Konecranes’ global president, maintenance services, said that for the company’s competitors, “they might be located in St. Louis and servicing a crane down in Atlanta. Our concept is that you can start around Flint, Mich., and travel all the way down I-75 to Miami and never be more than two to three hours away from a Konecranes service center. In process industries where time is money, that is a significant advantage.”That concept has allowed KCI Konecranes to steadily build its market share in North America, even during the economic slowdown in the early portion of the decade that severely hampered the heavy industries that rely on overhead cranes. Now that the
business environment is steadily recovering, KCI Konecranes is building on that reputation for service and reaping some major new orders.

Texas success
For example, Structural Metals Inc. of Seguin, Texas, recently ordered a 230-ton AC-powered ladle crane with a 65-ton auxiliary hoist for its steel mill. “When we began planning our new facility, we became convinced of the advantages of the new AC technology for the steel industry. We had bids for both AC and DC solutions from several sources, but overall, we felt that the combination of features, price and diagnostic support was best from KCI Konecranes,” Robert S. Cude, mechanical engineer at SMI, said.

The crane will service a new and larger continuous billet casting machine that is scheduled for start-up in the second half of 2005. It is a very similar design to the 200-ton ladle crane recently purchased from Konecranes by Nucor-Texas for its new facility in Jewett, Texas. Konecranes is a well-known name throughout the world. Its roots trace all the way back to 1910 and the creation of a company in Finland to handle the repair and sale of renovated electric motors, which was a new business at the time. The word “kone” is Finnish for “machine.” Early on, the firm known as Kone became best known for its elevators, as it became a rival to American-based Otis in the global market. When the elevator market plunged with the arrival of the Great Depression, Kone looked to diversify and began to construct industrial cranes. That new business grew steadily until 1994, when the management of Kone decided to focus solely on elevators and thus spun the successful unit into today’s KCI Konecranes. Worldwide, KCI Konecranes reported taking in $664 million in sales in 2003.

The company made its first major entry into the American market in 1983, when it purchased the Ohio-based Robbins & Myers’ Hoist and Cranes Division. Since then, the company has grown here dramatically, both organically and through a series of acquisitions. The North American unit is headquartered in Springfield, Ohio, with a major manufacturing operation in Houston, and employs nearly 900 people. “This industry is very fragmented, and still is to some degree,” Sothard said. “There were about 150 to 200 small crane businesses when we started.” Over the years, KCI Konecranes has acquired some of those companies in building out its nationwide network.

Leader in the Northeast
Most recently, the company acquired the assets of Dwight Foote, Inc., a Hartford, Connecticut area industrial crane and service supplier that provides industrial cranes, lifting equipment, parts and service to customers in the aerospace, metal finishing, public utilities and general construction industries within the New England states. That purchase, combined with several in the late 1990s, has made KCI Konecranes an industry leader in the Northeastern region.

Sothard said the key to growth was a decision shortly after KCI Konecranes came to North America to establish a major after-market and field service unit – something that didn’t really exist at the time. When a recession struck the United States in the early 1990s and many companies looked to upgrade existing cranes rather than purchasing a new one, KCI Konecranes was well positioned. Its sales actually rose during that downturn, while rivals saw business plunge.

Driving that trend was the tendency for many American businesses to focus on their core competencies, which meant subcontracting out tasks like operating overhead cranes. “If they made cars, they wanted to focus on cars, and if they made paper, they wanted to focus on paper,” said Sothard. Crane Pro Services markets a wide variety of services, including inspections, repairs, modernizing, and maintenance contracts which ensure that a KCI Konecranes technician is nearby to deal with any problems, allowing customers to free up manpower. “That’s now our largest business segment,” Sothard continued.

Only KCI Konecranes offers inspection and maintenance programs enhanced by a sophisticated maintenance management software system called MAINMAN II – TNG. MAINMAN captures data on the condition of over 200 crane components and then analyzes, prioritizes and schedules required repairs. MAINMAN’s ability to predict maintenance needs has resulted in maintenance schedules in which 90 percent of the work done on cranes inspected and maintained by KCI Konecranes is planned, greatly reducing downtime. Sothard noted that the success of Crane Pro Services makes it more likely that clients will turn to KCI Konecranes when there’s a need for a major new piece of overhead equipment. He said the company had seen its share of the North American market grow during the recent downturn, even as the lifting equipment market as a whole was experiencing flat or declining sales. The Port of Houston Authority placed a repeat order for seven of Konecrane’s newly designed Rubber Tired Gantry Cranes (RTG) with Konecranes VLC. The order, worth over $10 million, is due in April 2005. The Port of Houston Authority, one of America’s top container terminals, is currently operating 15 of the Konecranes RTG’s. “The seven new ones will help us to provide even faster turnaround for container vessels visiting the Barbour’s Cut terminal where the fast growth in container traffic continues,” said Executive Director Tom Kornegay, Port of Houston Authority. Officials at KCI Konecranes believe big orders like this will only pick up as the economy builds steam.

Just like one of its highly innovative RTG cranes, this is a company that’s well positioned, and ready to rise.