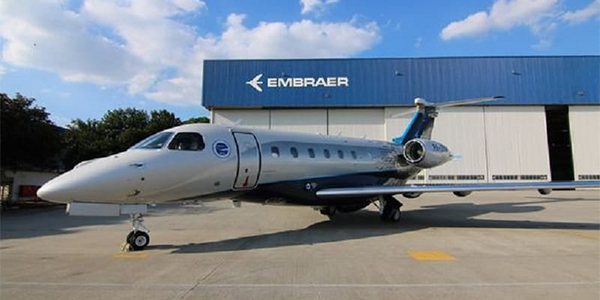 Can you name the world’s number three aircraft maker? Let Boeing and Airbus duke it out at the top, but Embraer of Brazil brings home the bronze. With a signature low-wing configuration and upturned winglets on many of its airplanes, the Embraer fleet of executive, commercial, and military aircraft cut a recognizable profile in the sky. The company may also be headed for a lofty market position because of its fleet of smaller commercial aircraft. Embraer is the world’s leading manufacturer of commercial airline jets up to 110 seats. An expanding fleet of high-value private jets promises to capture market share in business aviation.

Embraer (whose name is short for Empresa Brasileira de Aeronáutica S.A., roughly translating to Brazilian Aeronautics Company) is headquartered in São José dos Campos, Brazil, with subsidiaries in China, France, Portugal, Singapore and the United States. The company (NYSE: ERJ; Bovespa: EMBR3 and EMBR4) was founded in 1969 as a state-owned operation and was privatized in 1994.

On the commercial side, Embraer has produced and delivered more than 900 extended range jets (ERJs) to more than 30 airlines in 20 countries since 1996. Its family of 37-, 44-, and 50-seat ERJ 135, 140, and 145 jets offers unparalleled versatility for airlines to tailor capacity to market size. The FAA-certified 50-seat ERJ 145XR is already expanding regional networks even further with its 2,000-nautical-mile (nm) range. Clearly the company is poised for today’s changing North American markets, having anticipated the emerging shift to regional routes in commercial aviation and the resulting need for smaller planes to maximize capacity. Embraer’s 70-seat EMBRAER 170 is the first of a family of four, new-generation commercial jets seating 70 to 110 passengers. It would take 242 of those aircraft to accommodate the company’s workforce of nearly 17,000 employees. No wonder Embraer’s order backlog totals $10.4 billion.

Other key commercial aircraft in the fleet include the 78-seat EMBRAER 175 and the 100-seat EMBRAER 190; the 108-seat EMBRAER 195 is expected to be certified in mid 2006. All feature the Embraer core design elements: spacious cabins, large forward and aft cargo compartments for baggage and freight, and superior performance capabilities.

“Major airlines like Jet Blue, United Express, and Air Canada are testimony to the fact that the airlines have confidence in our ability to launch, design, build, certify and deliver to the industry,” says Ernest Edwards, vice-president, executive aviation sales and marketing for the U.S., Canada, Mexico and the Caribbean.

The defense market is also significant for the company. More than 20 foreign military air fleets operate aircraft designed and manufactured by Embraer. Currently, 179 models of the subsonic AMX ground attack and air support aircraft are flying for the Brazilian and Italian governments. The advanced attack AMX-T jet for pilot training and armed reconnaissance missions has been selected and ordered by Venezuela and will soon enter service. The Airborne Early Warning and Control EMB 145 AEW&C and the Remote Sensing EMB 145 RS/AGS are already performing regular flight operations in Brazil. The Maritime Patrol P-99, in its MP variant, has successfully completed the flight test program and the first unit was delivered to its customer. Embraer also produces the Super Tucano, a light attack/trainer aircraft for the Brazilian Air Force.

Executive Suite
Perhaps most coveted of all its offerings are the airplanes in Embraer’s growing private aviation fleet. The company brought its design and engineering expertise to executive aviation in a timely move in 2001 with the flagship Legacy 600, available in Executive and Shuttle versions to meet the demands of today’s diverse market applications.

“Embraer executive jets combine the proven engineering excellence of our commercial aircraft with design details that meet the form and function demands specific to the business jet market,” Edwards says. “Since 9/11 the reduction in some airline schedules has helped our (private aviation) side of the business. When major airlines stop flying as many airplanes and mothball some, the reduction in service, along with security concerns, privacy issues, access, efficiency – all of those combined have made private aviation a lot more attractive to those who can afford it,” he says. “In the old days, 20 years ago, we had to convince people this wasn’t a (company) chairman’s plaything. I don’t think that even enters into the vocabulary now.”

The Embraer Legacy sets new standards for comfort, range, and economics among airplanes in its business jet category. Most important it embodies Embraer’s philosophy of providing an unparalleled value proposition in executive aviation. The Legacy is classified as a super mid-size private jet aircraft, yet in terms of cabin size, it offers the cabin real estate equivalent to the next larger aircraft, a wide jet.

“In each of the executive aviation categories where we compete, we build the largest cabin in that category,” Edwards stresses. “We want to build the best value for the money.”

The Legacy 600 provides premium comfort and privacy for up to 16 passengers in three distinct seating areas. Interior standard features include first-class leather seats, plush divan, an elegant credenza, and spacious tables for dining or meetings.

The aircraft also has a full-size galley for hot and cold meals, a full-breadth aft lavatory, wardrobe and storage cabinet, and an entertainment system with DVD players and satellite telecommunications. The Legacy 600’s High Speed Data (HSD) and Wireless Fidelity (Wi-Fi) capability allows customers to browse the Internet, access e-mail and transfer files. Priced at $23.6 million (January 2006 economic conditions), the Legacy 600 cruises at a speed of up to Mach 0.80 and offers a range of 3,250 nm (6,019 km) with eight passengers and NBAA IFR reserves. This range, bolstered by superior passenger and luggage capacity, enables customers to fly nonstop from New York to Los Angeles, New York to London, and from London to Dubai at lower operating costs than competitive aircraft in the same class. Also, the Legacy 600 is the largest business jet certified to operate into and out of London City Airport, being capable of flying to Moscow with eight passengers from London City.

Preparing for Takeoff
Embraer will soon launch a light jet, the Phenom 300, with the cabin room of the larger mid-light, giving it the largest cabin volume in the light jet category. The Phenom 300 jet will be powered by Pratt & Whitney Canada’s PW535E engines, with 3,200 pounds of thrust each. Comfortably accommodating up to nine people, its range will be 1,800 nautical miles (NBAA IFR reserves with 100 nm alternate) with six persons onboard, and it will have a maximum operating speed of Mach 0.78. The airplane is also designed for short field takeoff performance and is capable of flying at 45,000 feet (13,700 meters). The Phenom 300 is priced at $6.65 million based on 2005 economic conditions. The aircraft appeals to corporations flying large turboprops and smaller light jets because, ultimately, this jet is priced millions of dollars lower than competitors in its category.

“Operating cost per trip will be lower for the Phenom jets compared to turboprops. No competing business jet can say the same,” Edwards says. “And, all of Embraer’s executive jets are designed for high availability and utilization, so when an operator needs to fly, the aircraft is ready.”

Embraer’s very light jet (VLJ), the Phenom 100, offers the cabin real estate of a mid light, the largest cabin in the VLJ category. The Phenom 100 very light jet and the Phenom 300 light jet are simply best in class. Premium comfort, outstanding performance and low operating costs are key design drivers. Both aircraft will offer pilots and passengers comfort and style unseen in their categories. The relaxing ambience is enhanced by the size of the generous windows and the most ample cabin in their class. Onboard conveniences include a refreshment center, a private lavatory, and satellite communications. The Phenom 100, seating up to six, is powered by Pratt & Whitney Canada’s PW617F engine, with 1,615 pounds of thrust. Its range will be 1,160 nautical miles (NBAA IFR reserves [35 min], with 100 nm alternate); or 1,320nm (NBAA VFR reserves [45 minutes]) with four people onboard, and it will have a maximum operating speed of Mach 0.7. The airplane is designed for short field takeoff performance and is capable of flying at 41,000 feet. The Phenom 100 is priced at $2.75 million in 2005 economic conditions. The Phenom 100 and Phenom 300 are cleared for takeoff to enter service in 2008 and 2009, respectively.

“First and foremost we bring our engineering background and extensive knowledge in aircraft design and manufacture to executive aviation,” says Edwards. “But as a commodity, the consumer asks, is this worth what the manufacturer is charging for it? When a prospect looks at what we have to offer, whether it is in the airline world or the corporate world, they see what we are providing and the price we are providing it at, and above all of that the quality.”

Transcontinental PlayStation
Technology, of course, represents the key trend in all three airplane markets: airline, defense and business aviation. “The technology is forever changing including avionics, navigation equipment and safety equipment,” Edwards says. Executive aviation now enjoys some of the systems that were once preserved for military jets. Refined safety equipment in the Legacy and Phenom include a Terminal Collision Avoidance System to prevent crashes with other aircraft, an enhanced ground proximity warning system to alert to terrain and mountains, and other cutting-edge avionics.

But it’s not just the pilot who demands futuristic systems, it’s the passengers. “Technology is one thing the buyer of the airplane is looking for. Sometimes it’s super equipment, sometimes it’s mundane stuff like, Will your airplane accept my iPod when I plug it in? Will my children be able to use their PlayStation on a flight from New York to L.A.?” Edwards says. (Of course, consumer electronics like iPods and PlayStations, along with business systems such as Internet access, e-mail, worldwide satellite-to-ground telephone service, news and business wire services are all provided among the creature comforts.)

The forthcoming launch of the two new private airplanes (Phenom 100 and Phenom 300) demonstrates Embraer’s commitment to executive aviation. The company has invested more than $200 million in its state-of-the-art production facility in Gavião Peixoto, in southern Brazil, devoted to the executive as well as defense markets. “This is a message to the industry that we are here to stay,” Edwards says.