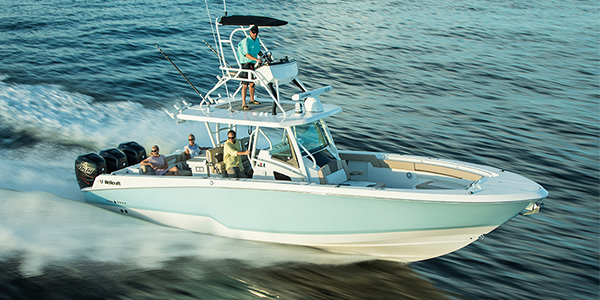 Wellcraft Marine Corporation, the luxury-boat division of Genmar Industries, Inc., has “some pretty cool things happening,” in the words of the division’s president, Mike Scruggs. These happenings all revolve around new manufacturing technology and distribution capabilities. They also underscore Wellcraft’s ultimate commitment: to build the best boats on earth.

On the manufacturing side, Wellcraft’s new technologies have set new standards for the whole boating industry. “What we’ve done is take the boat manufacturing process from the Dark Ages to the 21st century,” Scruggs says. They are the result of efforts involving all of the brand names in Genmar’s recreational boat division: Glastron, Larson Boats (also profiled in this issue) and Logic Boats, which are based in Genmar’s headquarters in Minneapolis; and Aquasport and Wellcraft, both located in Sarasota, Fla.

The commitment that led to these technologies flows right from the top of the Genmar organization. Scruggs credits Irwin Jacobs, Genmar’s chairman of the board, for the realization of these innovations. “Irwin captured the vision of seeking out these new technologies, and he directed the expenditures to make it happen,” Scruggs says. “Without Irwin, none of this would be possible.”

Breaking the Mold
The standard manufacturing method for the production of a fiberglass boat is the resin transfer mold (RTM) process. This involves using an open-face mold into which the fiberglass is poured, which is then sprayed with gel coat and shot at with a chopper gun to put resin glass into the mold and fiberglass. After this, a person takes a roller and rolls all this material together in the mold. “There’s a lot of waste from this process, including styrene which, of course, presents an environmental problem,” says Scruggs.

In 1999, Scruggs and other Wellcraft executives met Gene Carilla of VEC™ Technology, Inc., of Greenville, Pa., who had a potential answer to this problem. “Gene had a process called VEC™ (Virtual Engineered Composites) that he was working on, which took the variables out of RTM and linked it with the digital world,” says Scruggs. “He had a machine that made some small parts, but his vision was that this could be introduced to the boating industry.”

Wellcraft brought the Genmar executives to look at Carilla’s process. Shortly afterward, Genmar and Pyramid reached an agreement for the production of a boat hull using VEC™. “We worked on that hull for about a year,” Scruggs recalls, “and in the end, we were making some of nicest parts you’ve ever seen.”

From the first, it was apparent that two of VEC™’s advantages over RTM were speed and improved quality. The RTM process requires numerous molds and takes about four hours to make one finished boat. The new process produced a finished boat in 22 minutes, and also produced a product that was superior to the old process. “Because of the rolling required in the RTM process, you often get air bubbles in the laminate. With VEC™, there’s no air in the laminate at all,” says Scruggs. “This makes for real nice, solid laminate results with better structural integrity. We routinely measure every aspect of our boat production, and we saw, with VEC™, that our waste level dropped dramatically.”

As of early November, Wellcraft had produced 1,500 boats with the VEC™ process, and “this is just at the tip of iceberg,” says Scruggs. “VEC™ benefits all the quality points of the boat. We will have the technology fully in place at Wellcraft in the next year or so.”

Another manufacturing innovation came from Genmar’s acquisition of Logic, based in the Raleigh/Durham area of North Carolina. Logic had developed a patented process to make boats entirely out of plastic and all in one piece. “We saw the opportunity to take this process and make a boat that would surpass fiberglass,” says Scruggs. “Genmar invested some money into new tooling at the Logic location, including one of the first big cast-aluminum tools.” The first result from the Logic process was an 18-foot boat, and the quality was astounding.

“Step back 3 feet and you can’t tell the difference between this boat and a fiberglass boat,” Scruggs claims. “Its stringer system, which supports the hull, is made with no secondary bonding — as opposed to fiberglass boats, which are all secondary bonding — and this yields a very strong boat. Endurance testing shows stress cracking with fiberglass boats. We brought the Logic boat to trade shows, where people could take a sledgehammer to the bottom, but there was no cracking whatsoever. We think this has as much upside as anything that’s happened to boats for years and years.”

Extra-service
The responsibility for marketing and selling these new upsides, and the rest of Wellcraft’s line, falls to its network of dealers and distributors. In this area, Wellcraft has made strides that, as with its new manufacturing technologies, have brought the firm into the modern age of marketing.

The centerpiece of its distribution initiative is Wellcraft’s Extranet, its Web site strictly for dealers and distributions. “What we did here was put our pricing and manuals on the Extranet, as part of our initiative to improve communications,” says Scruggs. “All of our warranty information and other product information are now on the Extranet. We’re probably the only boat manufacturer to have taken that step. It has improved our communications with the dealers, and has improved our marketing because we also post test results on our new boats right on the Extranet and on our Web site.”

Wellcraft has also created a CD-ROM for its dealers, which they can use to take their customers right through the products, especially their pricing and features. “The CD-ROM gives our boats a customized look for the end customer,” says Scruggs. “We’ve done one nice catalogue this year and when the dealer hands you the catalogue, he also hands you the CD-ROM, which walks the customer right through the deal.”

Wellcraft believes that its future growth will come, in some measure, from the offshore saltwater fishing field. The company has launched a whole new series of cruisers, the 2800, 3300 and 3700 Martinique models; and has installed teams that compete in the Southern Kingfisher Association’s saltwater-fishing circuit. The teams use the new boat models, which “are doing gangbusters,” says Scruggs.

The company has also taken customer service to still a higher level through its fishing school, located in Sea Island, Ga. Opened just this fall, the school trains people on how to use Wellcraft boats and how to fish from them. Also new is the company’s First Mate program, featuring an 800 number that provides 24-hour assistance on how to fix a boat problem, where to get gas or even where to get reservations for food. The service direct boaters to the solution of their problems regardless of their current location.

“We’re just trying to take the hassle out of boating,” says Scruggs. “Everybody gets pumped up for recreation but if one of our boaters has a problem, it’s devastating to what they use the boat for. We want to solve these problems quickly.”