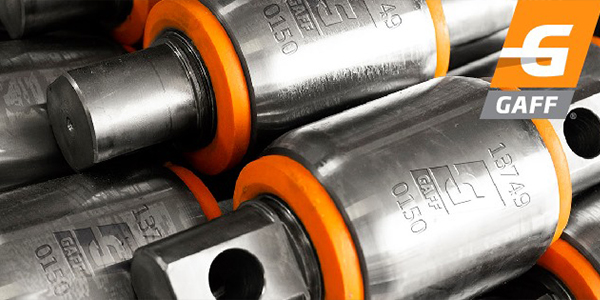 Over two decades of in-house experience in innovating, engineering and formulating a wide selection of polyurethane components for many different industries has qualified Gaff as a premier manufacturer of the highest quality polyurethane products in the country. Excellence is a part of company policy, from the initial design stages, where tolerances, preloads and material formulations are made, all the way to final delivery. Attention to component function and the devotion to quality have resulted in continued organic growth for the company.

Gaff International began operations in 1985 in Guadalajara, Mexico, where it is still headquartered. At its founding, the company introduced to the market an innovative product line for the automotive industry made of polyurethane with superior mechanical properties. The company’s vision is to fully replace conventional rubber. The chemical components and physical properties of polyurethane make this material highly resistant to the exposure of external chemical agents. Savvy truck or car fleet entrepreneurs know that endurance to harsh environmental conditions and heavy use is critical in minimizing down time during maintenance.

Polyurethane – ideal for superior design
“Polyurethane is a thermosetting material used in the production of molded plastic parts, coatings, and insulating foam. In contrast to conventional natural rubber, it has proven to be a far superior, high-tech material in its own right. Virtually no other material can be deployed in such a versatile manner in product design,” says Raymundo Gonzales, General Director. “In addition to its impact strength, its low weight, rigidity and high dimensional stability make polyurethane the ideal material for combining aesthetics, and performance.”

Apart from its outstanding design properties, Gaff’s polyurethane products are also corrosion and chemical-resistant, offering a high level of endurance to abrasion as well as heat insulation. Polyurethane parts are created through reactive multi-component systems. During the processing of these polyurethane systems, the two liquid components, polyol and isocyanate, are combined and then cured in an exothermal reaction. This process is commonly known as reaction injection molding.

As opposed to rubber, which can absorb suspension noise that can be easily transmitted to the interior in late-model vehicles, Gaff’s polyurethane bushings offer a high-tech alternative to rubber. Polyurethane also has longer life expectancy, which should be taken into consideration when assessing cost. As for durability, the breakdown and compaction of rubber is further aided by exposure to oil, salt, dirt, acids, and a host of other elements. Before long, the bushings are as hard as a rock or soft as a marshmallow, depending on where they are on the vehicle and what conditions they have been exposed to.

“Our company’s polyurethane products will improve performance of shock absorbers and will surely outlast conventional bushings and components by a matter of years. The performance of these bushings is also substandard as the rubber compound has the tendency to give under pressure rendering a soft and unpredictable suspension,” continues Gonzales.

“Abruptly turn the direction of the vehicle’s travel during high speed driving, and the demand will seem to hesitate due to the force applied on the flexible rubber suspension bushings. Ours are manufactured with only the highest quality polyurethane, which has the advantage of being firm yet durable. These are ready to install and can be easily pressed into lower shock eyelets and/or sway bar or alternator brackets after removal of the tired OEM bushings.”

A shaft of quality
After having received ISO 9001-2000 certification, Gaff International has stronger credentials to reach out to larger original equipment manufacturers. Gaff’s 15,000-square-foot facilities encompass six buildings: three of them house production lines, two buildings are outfitted to house corporate offices and one warehouse where the finished product is stored. On average, the company uses up about 24 tons of polyurethane and 70 tons of steel per month that go into approximately 1,500 products for different automotive applications. This represents about 50 percent of Gaff’s total production capabilities at the present time. Suspension and shock absorbers for heavy and light load trucks and buses, brakes, and polyurethane axle boxes for torsion bars are just a sample of its broad product line.

“At Gaff International, we have made great progress in acquiring new technology that allows us to beta test our products before their introduction to the market. We strive to make sure that the specific standards set by our clients are meticulously met,” Gonzales says. “Our company has mostly focused on the spare part replacement segment and now, with the arrival of large truck fleets to the market with two to three-year bumper-to-bumper guarantees, we are intensively looking at OEMs approvals and acquisitions specifications. To ensure all of our client’s specifications are met, all of our products are engineered with computer aided design (CAD) using the latest computers and software. Application after application, innovative designs have set industry standards. The latest in-house computer robotic manufacturing methods allow precise and reliable production.”

Stepping on the accelerator
Gaff’s growth rate over the last few years has been in the order of 15 percent in 2002, 11 percent in 2003, and 30 percent in 2004. Increased growth has been reflected in the number of Gaff’s strategically established service centers and outlets located both in Mexico and abroad. Gaff has offices and warehouses in Chile and the United States, and has exclusive distributorship agreements in Colombia, Venezuela, Ecuador, El Salvador and Australia. In addition, the company currently exports its products to more than 18 other countries around the world.

Gaff’s current leadership position in the industry has been accomplished thanks to the superb quality of its products, in addition to its continuing efforts to furnish the transportation industry with innovative products and services that aid in increasing their cost-effectiveness in order to remain competitive. “Ours is a perfection-driven company,” says Gonzales, “and we follow this direction every day in all of the markets our company has penetrated.” The company has systematically drawn from its internal strengths in order to achieve a continued growth rate. By the end of 2005, it is planning on setting up three new distribution centers, in Sao Paulo, Brazil; Frankfurt, Germany; and Shanghai, China.

Product line benefits
Three of the most valuable reasons for using Gaff’s performance polyurethane components instead of rubber components on cars and trucks are improved performance, greater durability and custom appearance. Firmer handling, minimized deflection, and greater durability are a few benefits of poly suspension components, and other parts such as urethane body mounts or lifts are less harsh than aluminum mounts. But the most important benefit of all is safety. For Gaff International, the term “safety” equals “ease of mind and comfort” during vehicle operation.

And senior executives at Gaff know that many a driver and their companions will be thankful for the ride.