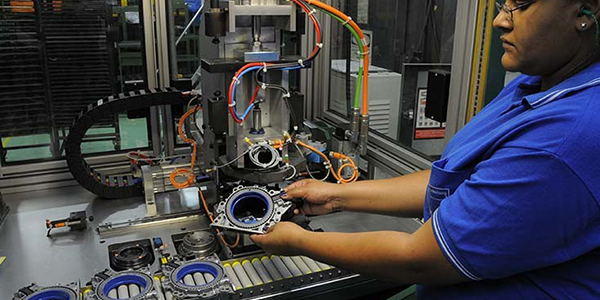 Although the German-based Freudenberg Group arrived in Brazil 30 years ago, as Jorge Rugitsky, president of Freudenberg-NOK Brasil, recalls, “until 10 years ago, our presence in the tier suppliers and assembly markets was laughable.” What happened in 1996 was that Freudenberg, which since 1977 had been involved in a joint-partnership in Brazil with Japan’s NOK Corporation – initially under the name Rubrasil, (a Brazilian company it had purchased in 1976), and then, from 1988 onwards, under the name Freudenberg – underwent a major restructuring. When it reemerged as Freudenberg-Nok Brasil Ltda, the new company was a force to be reckoned with in the automotive components sector. Suddenly, nobody was laughing anymore.

Says Rugitsky: “In the last decade, our performance has been really excellent. The company’s growth rate has more than tripled since 1996. And during the last four years, we have seen annual growth rates of 25 percent. Today, we can proudly say that we are the number one supplier of seals and related components for tier suppliers and assemblers in Brazil.”

Family Ties
The Brazilian group’s success is hardly surprising when one considers its parentage. Together, Freudenberg and Nok are the largest producers of elastomeric seals
and custom molded products in the world. With close to 160 years in activity, the family-run Freudenberg Group currently boasts over 41 production facilities in 27 countries
and annual sales of $3.5 billion (in 2004). Says Rugitzky “We have very strong ties to Germany and to all the other subsidiaries. Our computer system is centralized as is our operational system.

We work directly on Freudenberg’s browser and participate in the group’s activities in Europe and the U.S. And then, of course, we benefit enormously from Freudenberg’s superior technological development, which enables us to offer products whose quality is superior to those of our competitors.”

Freudenberg has always been on the cutting-edge of the seal sector. Originally a tannery reputed for its quality leathers, by the 1920s, the company had grown into one of the largest leather manufacturers in Europe. However, when the Great Depression hit Germany, Freudenberg found itself on the brink of collapse. Its salvation was a seal that it made from leather residues and two metal sheets for DaimlerChrysler that subsequently led to the invention of the Simmering, a radial shaft seal whose patented name became a technical term in its own right.

Close to a century later, Freudenberg is still in the vanguard of its sector in terms of technology, with a strong commitment to researching new materials and finding new solutions for the increasing demands of its clients. Says Rugitzky: “We are very focused on investing in the products of tomorrow. For example, there has been a great evolution in terms of seals for motors. They used to be made of sophisticated rubbers until elastomeres were developed that resisted high temperatures, high speeds, and supported oils with corrosive additives. Today, we’re trying to create even more sophisticated recipes for a new generation of seals that will make motors even lighter and more compact.”

Such “recipes” have been essential to Freudenberg-NOK Brasil’s growth. Jorge Rugitzky confirms that the company is on the verge of earning $100 million in revenues and emphasizes that this is no mean feat considering that seals are components with a very low value. “Many people don’t know how sophisticated a seal can be. For instance, seals today include rotation sensors for motors and use magnetized rubber instead of metal. There is no more need for separate components, which makes for a much cheaper solution for assemblers.”

Assemblers gain greater economy in terms of fuel and end up with vehicles that are not only lighter, but also comply more readily with increasingly strict environmental standards since the components’ increased precision means fewer emissions. Says Rugitzky: “This, in turn, provides added value to assemblers, who can offer higher quality products with guarantees of a longer life.”

Provider of Solutions
Ultimately, Freudenberg-NOK Brasil considers itself less a supplier of conventional products than a provider of innovative solutions that enhance the performance of its clients’ products while diminishing their costs. At its 55,000-square-meter facility in Diadema, São Paulo, Freudenberg-NOK Brasil has invested more than $20 million in equipment and laboratories. Among its staff of 500 are 60 specialists who head its state-of-the-art technology center. Says Jorge Rugitzky: “Our personnel has a strong technological background. We really listen to our clients and provide them with technical support, customization, and consulting services so they can meet the challenges of the market.”

In Brazil, in particular, Freudenberg-NOK has worked hard to respond to the specific demands of its clients. For example, since Brazil is currently the world leader in flex-fuel motors that run on gas and alcohol derived from sugar cane, Freudenberg-NOK has been a pioneer in developing and manufacturing flex-fuel components and, as a result, possesses technology and know-how that doesn’t exist outside of Brazil. As a result, the company is the only representative from the rubber industry sector that was invited to help analyze biodiesel trends and set global norms for flex-fuel vehicles as part of a project undertaken by the Society of Automotive Engineers (SAE), based in the United States. At the same time, its international ties have given the company a leading technological edge on its home turf, allowing it to supply not just products manufactured in Diadema, but also essential components fabricated at other Freudenberg facilities around the world.

Rugitzky claims that none of its Brazilian competitors possess its range in terms of products, or its market penetration. Among the company’s main products are radial shaft seals, o-rings, gaskets, specialty sealing products, vibration control devices, hoses, and automotive rebuild kits. Although the majority of these components goes to automotive OEM and aftermarket markets, through its Simrit division, the company has branched out into other industrial areas, including the electrical appliance, aeronautical, petrochemical, and agricultural sectors. Indeed, its roster of clients comprise a veritable Who’s Who list that runs the gamut from DaimlerChrysler, Ford, GM, Volvo, ArvinMeritor, Scania, and Renault to John Deere, Yamaha, and Electrolux. “Our presence in so many markets has been a great advantage,” admits Rugitzky. “For instance, we make seals for car motors, lawn mowers, and washing machines. Since 2002, we doubled our revenues as a result of expanding into these general industrial sectors. And we hope to double them again by 2012.”

Gone Global
Meanwhile, another boon to Freudenberg-NOK’s remarkable growth was its decision – and ability – to go global. As Jorge Rugitzky explains: “Prior to the restructuring we didn’t have the conditions to offer global service. Afterwards, we were able to negotiate and send products to any part of the world, whether it be Brazil, South Africa, or China. For instance, through Freudenberg-NOK in the U.S., we have ended up supplying seals to Honda in the United States. We currently export components to clients in Europe and the U.S. that only we are capable of supplying.”

In fact, it was its entrance into the American market that really caused Freudenberg-NOK Brasil to take off. As a result of this conquest, today exports comprise 30 percent of the company’s total revenues. And in spite of the plummeting U.S. dollar – in the past two years, the dollar’s value has fallen from close to 4 reais to 2 reais – the company has still continued to make a profit from exports due to significant gains in productivity, made possible by its ongoing technological commitment.

Says Jorge Rugitzky. “Because of our success as a company, we have a large potential for growth, not just by maintaining the clients we have here, but also by bringing new businesses from other countries to Brazil and by conquering new markets abroad. Being truly global means we follow our clients wherever they are. We are everywhere they need us to be.”