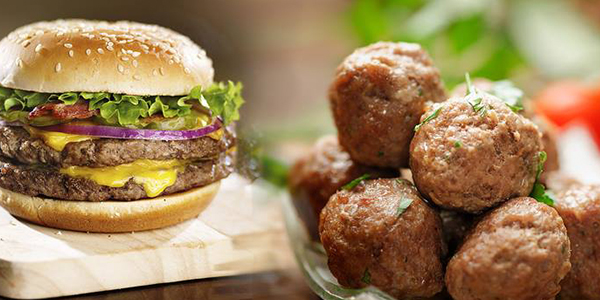 Don Bernstein started his frozen foods business back in 1960 in Scranton, Pa., an area once referred to as “little Chicago” because it had the second largest meat processing operation in the U.S. Today, the Maid-Rite Steak Company is still family-owned, still operating in Pennsylvania with headquarters and main facilities in Dunmore, and with satellite operations still in the nearby Scranton area. While government regulations have grown stricter, the business has increased, facilities have expanded, and product lines have evolved in new ways. The company’s formula for success remains the same: provide a quality product at a reasonable price with high levels of customer service.

“People always have to eat, so demand is always going to be there,” Don says in explaining one element of his company’s longevity. Equally important is the time-honored concept of giving customers what they want. “We’ve been in business over 40 years, and still have some of the same customers because we work to satisfy their needs with over 300 portioned meat products that are consistently top of the line.”

As president and founder of the company, Don has done and seen it all. Working out of his original 3,000-square-foot building in Scranton, he filled the roles of manager, salesperson, and delivery person. In the next eight years, Maid-Rite expanded another 6,000 square feet in freezer space. By 1979, the company made the move to a larger plant on 10 acres in Dunmore that today, after several more expansions, features a 2,150 foot blast freezer and two holding freezers totaling 18,000 square feet. Two different manufacturing product categories – raw and pre-cooked – run under the same roof but operate out of separated areas to avoid cross contamination. The production floors contain the most modern meat processing equipment available, including four cryogenic quick nitrogen freezer tunnels. And Maid-Rite has its own fleet of delivery trucks.

Made Right with Value-Added
Today, Maid-Rite has 280 employees, and two satellite operations; one dedicated to the preparation of certain products requiring a work-in-process step such as the Philadelphia-style sandwich steak and the other used to supplant the main facility during high demand periods. In addition, two of Don’s sons, Michael and Marc, are active in continuing the family tradition. Though the company carries a range of meats from different species, the corporate name remains Maid-Rite Steak (though there has been some thought to changing to Maid-Rite Foods). What remains important, Don notes, is the emphasis on “made-right.”

Perhaps the most significant change in the business has been the growth of pre-cooked products. Examples include: barbecue pork rib, sausage patties and links, char-flavored steakhouse burger (with grill marks) as well as its Chef Italia® line of frozen meatballs and the Minit Chef® line of quick preparation foods.

Says Mark Golden, vice president of sales, “Our competitive difference is that we provide added value. We work closely with our customers to the point of having their people work directly with our staff in our kitchen lab to test recipes, serving sizes, and preparation methods. We diligently practice the art of listening to our customers.”

Don notes that the growing trend in the industry is pre-cooked foods distinguished by some sort of specialty formulation. “I’d say pretty soon most of our business will be pre-cooked, because today’s lifestyles dictate something fast and convenient,” Don says. “That’s pretty much the direction the entire food business is heading.”

And while certain trends, such as the Atkins diet or lower fat content, do drive product formulations, Don says the ultimate impact on business is minimal one way or the other. “They’re fads,” he maintains. “This isn’t to say that we don’t look to be on the crest of these fads, but it doesn’t really affect the overall business. There’s always going to be some sort of meat product, in whatever flavoring or packaging, for us to provide. So I wouldn’t say there are any great fluctuations in supply and demand because of a given trend in consumer tastes.”

Maid-Rite sells primarily to food service distributors such as Sysco, U.S. Foodservice, and Pocahontas; about 30 percent of the sales are to retail customers. “Out of 3,000 SKUs, about 2,800 go to food service, and around 200 go directly to the supermarket segment,” points out Elaine Herzog, marketing director.

A major customer segment within institutional food services is healthcare. “Nursing homes are particularly concerned about the balance between portion size and nutritional value,” Herzog says. “They want something that is appetizing in both appearance and taste, and with minimum potential for waste to keep costs down.” The military is another prime purchaser, particularly now with troops overseas in Iraq.

Well-Grounded Safety Measures
The meat-packaging industry has in recent years suffered from bad publicity stemming from outbreaks of E. coli contamination and mad cow disease. However, this hasn’t had much of an impact on Maid-Rite. “Really, the only affect it had on us was when Canada closed its borders last winter to U.S. imported meat,” Herzog notes, “and that was a government reaction, not a consumer one. Since the ban was lifted, we’ve recovered most of that business.”

“I’ve seen one statistic that about 70 percent of people eat at least one hamburger or ground meat product of some kind every day,” Golden adds. “That’s a pretty big market that isn’t going to just disappear overnight. At the height of the mad cow scare, we didn’t see any change in demand.”

Whatever health hazards may be associated with improper food handling won’t happen at Maid-Rite. Stringent control over all raw materials is carefully monitored from start to finish in one of the most modern facilities in the industry. “We exceed government safety standards,” Don points out. “For example, we have stations at every doorway for workers to decontaminate both their hands and shoes.”

To ensure a clean, sterile environment, a cleanup crew at the end of each shift thoroughly cleans and sanitizes the entire plant, including every piece of equipment. Once the cleaning process has been completed, quality control inspectors take a daily bacteria test on random pieces of equipment, which is also not required by the federal government. Although testing is completed in Maid-Rite’s own quality control lab, samples are also sent to a certified laboratory for further testing. At the completion of a production week, all pieces of equipment will have been tested several times.

When product is shipped to local distributors, it is typically carried by Maid-Rite’s own fleet of modern, refrigerated trailers. “Particularly in cities such as Philadelphia and New York where there will be anywhere from eight to 10 drops, using our own trucks is yet another way we exert quality control and maintain high customer service levels,” explains Don. “In addition, it’s less expensive in the long run, and by running more efficiently we can pass on those savings to our customers.”

While Maid-Rite has customers all over the continental U.S. and Canada, most of its sales are concentrated in the Northeast and Mid-Atlantic states. “We are located within a 500-mile radius of a region that accounts for one-third of total U.S. meat consumption,” Herzog points out.

This points towards continued success for Maid-Rite, which anticipates a 10 percent annual growth rate. While there have been some changes after all these years, Maid-Rite continues to hold a big stake in the meat of the business.