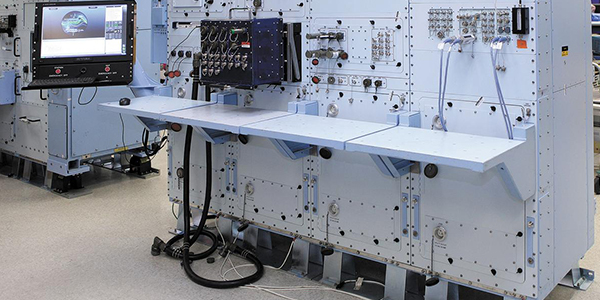 Lockheed Martin’s Naval Electronics & Surveillance Systems-Marine Systems Company is one of five members of the NE&SS organization. This unit of the technology giant has 11,000 employees and had total sales in 2000 of $2.6 billion, with a backlog of $4.5 billion.NE&SS-Marine Systems employs about 670 people in its 117,000 square-foot headquarters complex in Baltimore and in other far-reaching facilities and service depots. The company had sales last year of $250 million and a backlog of $600 million. A major product of the ISO 9001-certified company is the MK 41 Vertical Launching System, capable of firing a wide variety of missiles from naval surface ships. NE&SS-Marine Systems also designs, and is the systems integrator for, advanced technology vessels including the AGOR 26, the U.S. Navy’s first small water-plane area twin hull (SWATH) oceanographic research ship, which is now under construction at Atlantic Marine Inc., a shipyard in Jacksonville, Fla.

The MK 41 has become the responsibility of NE&SS-Marine Systems, and is currently deployed at sea in 13 configurations ranging from a single module with eight cells to 16 modules with 128 cells. The launcher is currently being integrated with 16 ship classes and 11 weapon control systems for 11 navies around the world.

The MK 41 is installed below deck to provide surface ships with the capability to fire a variety of missiles including anti-air, anti-submarine, surface-to-surface and strike (it’s the only launching capable of rapidly firing a combination of these missiles). The launcher design includes three sizes to meet most hull and mission requirements. The strike length is large enough to accommodate missiles for every warfare mission. The tactical length is about 7 feet shorter than the strike launcher, and can fire missiles up to about 181/2 feet in length. The self-defense launcher (SDL), designed for ship defense, is the shortest and lightest of its kind; it is ideal for smaller ships such as corvettes and frigates and for aircraft carriers with limited deck and hull space.

Because of the MK 41’s multiple-missile-type capability, any missile of tactical significance to the allied navies can be integrated with its vertical launch system. The standard exterior dimensions and connections of the launcher’s canister allow the deployment of any missile in any cell. An internal canister kit adapts to the features of each missile type.

The basic building block of the MK 41 VLS is an eight-cell missile module. Each module is a complete stand-alone, dual-redundant launcher, and includes a launch control system, gas management system, missile canisters, armored ballistic deck and hatches, deluge and sprinkler systems, and walkways.

The system’s modules can be combined to form launchers tailored in size to meet individual combat mission requirements. Additionally, the MK 41 uses algorithms to fire any scheduled missile from the cell last used longest ago, thereby enhancing overall system longevity.

Total-cycle Support
The company’s VLS team fully backs more than 120 ships in various fleets around the world. With its partner, United Defense LP, NE&SS-Marine Systems provides full-spectrum design-agent support to the U.S. Navy’s controlled configurations for launchers and canisters. The company’s support is comprehensive, beginning with delivery and training, and carrying through installation and checkout. The full deployment of launcher spare-part types is identical worldwide from ship to ship. NE&SS-Marine Systems has a 34,000 square-foot life-cycle support facility (LCSF) in Ventura, Calif.

Lockheed began designing ships with reduced hull resistance more than 40 years ago. The first technology the company explored was that of the hydrofoil, which led to the construction in the 1960s of the Plainview, the U.S. Navy’s largest and fastest hydrofoil vessel. The next decade brought the design and construction of the 2KSES solid-wall surface-effect ship, and the landing craft air cushion (LCAC) flexible-skirt air-cushion ships, also for the U.S. Navy.

The next step was the stealth Ship Sea Shadow. Lockheed Martin — working with the Defense Advanced Research Project Agency and in collaboration with the U.S. Navy — designed, built and tested this vessel using SWATH technology. The new ship achieved low motion in high sea states and left a water trail much less discernible than that of conventional ships. The vessel’s design also incorporated several advanced technologies, such as signature control, PC-based ship system control, PC-based sea-keeping and maneuvering control, automation for reduced manning, advanced structures and a stabilizer steering system that eliminated the need for rudders. Sea Shadow’s purpose was to evaluate the performance and applicability of these technologies for future naval vessels.

Unlike conventional SWATH ships, Sea Shadow is built using an A-frame configuration with struts canted at 45 degrees, significantly reducing ship motions because of an increase in hydrodynamic mass and damping. Lockheed Martin’s unique patented design solved several typical problems associated with SWATH vessels, and gave Sea Shadow motions in a seaway equivalent to much larger 4,000 to 5,000 long-ton conventional H-frame SWATH craft. Sea Shadow has served as a prototype for many of the new technologies that were incorporated into the U.S. Navy’s T-AGOS19 and 23 class SWATH ocean surveillance ships.

The SLICE design consists of a reconfigurable payload-carrying platform supported by struts and two submerged pods on each side (port and starboard). The pods are connected to the platforms cross structure by means of low-wave-resistance surface-piercing struts, which present a much smaller water-plane area to dynamic wave actions. The platform is, therefore, relatively isolated from the effects of ocean disturbance. The SLICE vessel is propelled by diesel engines in each of the forward submerged pods, which directly drive controllable-pitch propellers through reduction gearboxes. This unique forward propulsion system provides numerous advantages including central control from the pilot house. The vessel’s maneuvering and motion control is in the hands of Lockheed Martin’s patented canard and stabilizer steering and motion-control system. By providing superior pitch-and-roll control, this system eliminates the need for vertical rudders. Successful sea trials confirmed SLICE’s low-resistance predictions, and this Lockheed Martin vessel continues to be used as a demonstration platform.

Ahead of the Wave
In 1999, Lockheed Martin was awarded a U.S. Navy contract, with a potential value of $45 million, for the design and construction of an auxiliary oceanographic research vessel. The keel was laid for the 2,500-ton AGOR-26 in February. The 182 foot-long vessel with an 88-foot beam will incorporate twin-hull SWATH technology. The program’s key subcontractors include Atlantic Marine Inc. of Jacksonville, Fla., and the naval architectural firm of Guido Perla & Associates of Seattle.

This ship’s unique design includes two submerged lower hulls connected to the superstructure by thin struts. Compared to a conventional monohull or catamaran, the SWATH design provides a much smoother ride, a larger working deck area and stable, efficient operation in rough seas.

The AGOR–26 is being built for the U.S. Navy and will be operated by the University of Hawaii for general-purpose oceanographic research. The contract inaugurated the Title 845 streamlined acquisition process designed to reduce oversight and encourage greater government-contractor cooperation. “The keel-laying rite marks a significant milestone because it initiates actual ship construction from certified drawings,” says Dale Bennett, vice president and general manager of Lockheed Martin Marine Systems.

“AGOR-26 is the first ship to be acquired using the government’s new streamlined acquisition process,” Bennett adds. “The program combines Atlantic Marine’s reputation for quality and on-time delivery using commercial shipyard practices with Lockheed Martin’s innovative hull design, integration capability and experience in government contracting. Title 845 now reduces the normal construction timeline for a ship of this size from 43 to 27 months, yielding a more cost-effective process and timely product for the Navy and the taxpayer.”