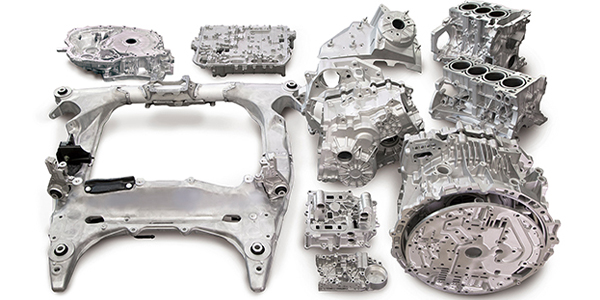 No matter which way you look at the auto industry, and no matter which continent you do your looking from, the future is lighter. Whether they run on gas, diesel, electricity, solar or some other power, cars will become lighter in the future. The laws of inertia make it pretty clear that the lighter you are, the farther you’ll go, no matter what’s pushing you. The hard part isn’t building a light automobile, per se. The trick is doing it without compromising safety and efficiency. Or your pocketbook.

“It’s a high velocity, high vacuum (die casting) operation that allows casting without producing gas bubbles,” says Ryobi Die Casting COO Tom Johnson. “There aren’t many people in the world that can do it yet and we’re fairly certain this process will become standard in the industry. It’s just so much better for safety reasons, plus it’s fast and efficient.”

Injection casting at HV (high velocity) has been problematic until now because higher injection rates often mean more gas bubbles, he explains. One of the major challenges in casting aluminum and alloy parts is keeping gas bubbles from forming in the walls of whatever you’re casting – a transmission (case), an engine undercarriage or other auto part. Bubbles are weak points in the material and compromise safety. Another HV process – high vacuum – prevents gases from developing.

Removing limits
“Our HV-Squared process allows us to completely remove gases that cause bubbles to form,” Johnson says. “Traditionally there have been limits on what parts could be cast in aluminum for cars, but this technology may remove those limits. Furthermore, parts produced from this process can be welded and heat treated with no problem.”

The Shelbyville operation was established in 1985 with primarily an automotive customer base. Ford Motor Company is the biggest customer, although Toyota, GM, and DMAX are becoming bigger factors each year in accounting for Ryobi Die Casting’s $200 million in annual revenue.

Collaborative effort
About 18 months ago, Ryobi Die Casting began a “Power-To-The-People” campaign called “Gung Ho.” Part of the push involves a formal “Improvement Suggestion Program” that urges all employees to contribute their ideas for continuous improvement in all areas of the operation.

“It’s definitely a collaborative effort and we want all of our employees to feel they can contribute,” Johnson says. “If somebody on the front line sees something that will make a product or a process better, we want to hear about it.”

Employees get a $5 reward for each reasonable suggestion. If an idea makes it past the first couple of hurdles, the worker who pitched the idea joins a team that might include engineers, designers, technicians and others to implement the plan.

“Eventually, the teams are rewarded with a bonus, but I don’t think people are doing it for the money,” Johnson says. “I think most people really appreciate being listened to and a lot of really good ideas come from it.”

Based on similar employee involvement programs at Ryobi Limited, Toyota and Nissan, Ryobi Die Casting’s program has saved the company about $2 million through suggestions from employees over the past year and a half, Johnson estimates.

In addition to the suggestion program, “Gung Ho” places a high value on communication and urges employees to talk about working conditions, goals and initiatives. The program also makes management responsible for communicating goals clearly and for recognizing contributions made by employees.

The Gung Ho concept has helped Ryobi Die Casting decrease employee turnover. The positive effect of this lower turnover is that fewer than 3 percent are now new employees, and many have been there five or more years.

Experience counts in the die casting industry and losing experienced workers was a problem a couple years ago. “You can’t replace experience,” Johnson says. “Experience really drives productivity and quality and we’ve seen both go up significantly since we started this collaborative approach.”

Starts with designs
The manufacture of die castings begins with design. Designers, engineers, and in some cases Ryobi front-line manufacturing personnel work together to draw up an initial plan. Almost all casting starts with computer-aided design systems.

The new HV machines will add another tier of options for Ryobi engineers and technicians. The final steps in the process are machining, surface treating and assembling the castings. Next, the company performs quality inspection after each step, including a high-scrutiny inspection at the end of the line before shipping to the customer.

Significant growth expected
Largely due to ramping up for HV-Squared innovations, Ryobi Die Casting expects to grow fairly quickly. “We anticipate pretty significant growth as we expand HV-Squared,” Johnson says. “We’ll go up maybe 20 percent (in employees) over the next three or four years, all of it most likely here in Shelbyville.”

If the new technology becomes standard in the industry as Johnson predicts, Ryobi Die Casting may have to change the name to HV-Cubed and add high value to the equation.