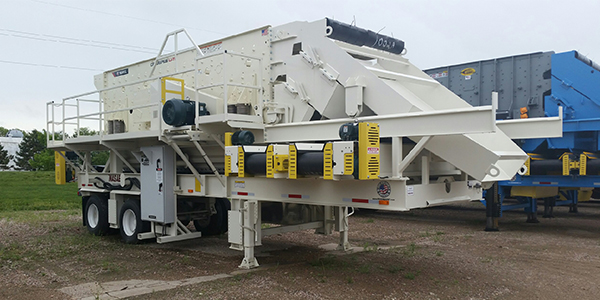 As we speed along any of the well-constructed and well-connected U.S. interstates, it’s probably true that very few of us ever think about how these roads came to be the critical corridors they are to each of us. Many times, they have even helped save lives as emergency vehicles rush people away from danger. Whether driving to the office, to the airport on the way to that well-deserved vacation, or just plain Sunday driving for an enjoyable day with the family, our lives are more enriched because of our excellent road systems — thanks to Cedarapids Inc. of Cedar Rapids, Iowa.

The bedrock of our road systems, as well as those throughout the world, rests upon Cedarapids’ name and reputation. Once road building began to accelerate as rural free delivery took hold in the nation, road-building companies began to consider better and more efficient methods of the road-building process.

“Road building in the early 20th century was a slow, disjointed process,” say Cedarapids’ executives. Many pieces of equipment and many workers were required for this Herculean task. Moving aggregate-making equipment and laborers from point to point was an inefficient, laborious and very expensive process.

Beginning in One Piece
All of these headaches dissipated when, in the early 1920s, engineer Guy Frazee invented the world’s first portable aggregate plant, called the One Piece Outfit (OPO). Frazee co-founded Iowa Manufacturing Company, Cedarapids’ direct ancestor. The new firm revolutionized the road-building industry with the easily transportable OPO machine. It was designed to receive unprocessed stone at one end, reduce it in size and produce ready-to-use aggregate at the other end. In reality, OPO was a complete processing plant encompassing a crusher, an elevator and a revolving screen. For the first time ever, contractors could now move their aggregate plants on- and off-site as necessary, without the loss of time and cost previously associated with these complicated moves.

Needless to say, the OPO was an instant success. During World War II, the U.S. armed forces used 1,700 OPOs in every theater of the war, helping to build roads throughout the world for the military and their equipment to travel on. Cedarapids became an immediate household name throughout the world.

Soon a second crusher was added to the OPO, called the Tandem OPO. Eventually the barrel-like revolving screen was replaced with a horizontal vibrating screen, which allowed faster and more accurate gradation of sizes. Today, Cedarapids offers the widest range of crushing, screening and washing plants in the world. These portable units are capable of producing material in excess of 600 tons per hour.

As the engineering of road construction advanced, engineers moved from designing simple crushed-stone road surfaces to well-engineered, all-weather hard surfaces. Back in 1929, Cedarapids had introduced one of the world’s first hot-mix asphalt plants. In 1956, the company launched its asphalt paver line of equipment with the industry’s first vibrating screed. This new piece of equipment significantly boosted both paving speed and volume over competitive models. Renamed and redesigned over the years, the line is now known as the Grayhound paver — so named because of its sleek profile.

In an effort to create the broadest product offering in the industry worldwide, Cedarapids bought New Holland Equipment in 1950 and EIJay, Inc., in 1976. New Holland brought to the company its impact-type crushers, while EIJay enhanced the company with its world-renowned Rollercone crushers and associated equipment. In 1989, Cedarapids further extended its product line by acquiring Standard Havens, a manufacturer of high-tech counterflow, hot-mix asphalt plants.

Next Stop
For about 80 years now, Cedarapids has continued to move the road-building industry forward with innovative thinking and engineering expertise. As a result, the company’s customers have become more and more productive. Cedarapids’ focus on new product development is creating more value for the end user. Virtually every country in the world has benefited from Cedarapids’ equipment.

In 1923, the company boasted a 12,000 square-foot building. Today, Cedarapids employs about 600 people and operates in more than 750,000 square feet of facilities in Cedar Rapids, Glasgow, Mo., and Vancouver, Wash.

The company was acquired by Terex in late 1999. “Under Terex’s leadership, our employees restructured the business using the Terex model, whose goal is to manufacture and market high-quality capital equipment designed to improve our customers’ productivity and ROIC (return on invested capital),” says Jeff Elliott, senior vice president of sales and marketing. Cedarapids focuses on critical manufacturing processes, outsourcing other processes for improved quality.

Smooth Cruisin’
“We offer a full line of products from high-wall to highway,” Elliott says. Cedarapids continues its heritage as the industry innovator. In 1997 it launched a revolutionary new paver design to combat the widespread problem of material segregation, which leads to weak spots in roads and reduces their wear lives. The Grayhound Remix Paver prevents segregation by reblending the asphalt after it is loaded into the paver hopper, just prior to laying it on the road. “By blending the asphalt mix at the last point possible in the laydown process, the Remix Anti-Segregation System is the most effective method of combating material and thermal segregation on the market. The Remix Paver also eliminates the need for any additional equipment in the operation, making it the most cost-effective solution on the market,” says Elliott.

In 1999, the company introduced another world’s first — the Rollercone MVP, the most advanced cone crusher in the world. “This product will bring to market a family of cone crushers from 200 to 500 horsepower that utilize state-of-the-art crush-and-chamber technology to ensure the highest quality product with the best weight-to-horsepower ratios,” says Elliott.

Another new product is Cedarapids’ TSH-8203-38 horizontal screening product. “It’s the highest-capacity horizontal screen produced by Cedarapids,” says Elliott. This product separates the materials, sorting them into different sizes of aggregates. The company also plans to introduce the new MS-4 Mat Smoothness machine to its hot mix asphalt paver line. “This is a revolutionary material-transfer vehicle that effectively moves material from the truck to the paver with a minimum amount of interface,” says Elliott.

Cedarapids markets its products primarily to highway building contractors and material producers. The company maintains a worldwide network of distributors through which owners and operators of equipment can obtain new equipment, parts and service.

“Cedarapids is proud of its pioneering role in the industry,” say company executives. “From the One Piece Outfit that pulled our nation out of the mud, to the revolutionary technology we see just over the horizon, Cedarapids is helping to build a better world.”