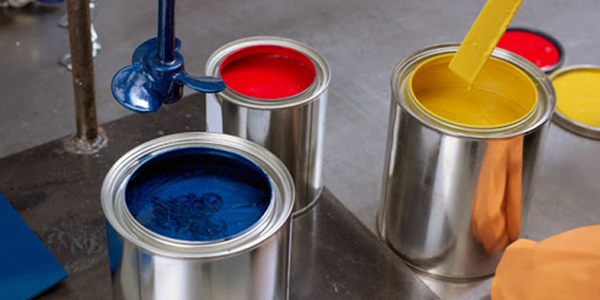 In the late 1930s, a businessman visited the offices of Red Spot Paint with a small piece of hand-carved and hand-painted clear plastic similar to the Ford blue oval of today. He asked Red Spot’s Milton Thorson if the company was capable of making paints for plastic materials such as methacrylate, butyrate, and polystyrene.

“He had never even heard of any of these,” said Charley Storms, the president and CEO. “But he said, ‘Sure, we can do that.’ ” Then Thorson tossed the piece of molding to his chief chemist, whose only qualification was that he loved the smell of lacquer thinner, and told him to get to work on inventing something. The chemist referred to the project with a colorful barnyard term that can be translated as used chickenfeed. If Thorson had not been the son-in-law of the founder, the project wouldn’t have gotten the attention that it did.

Little did anyone know that this moment would be the turning point in the history of the Evansville, Ind. company now celebrating its 100th anniversary in 2003. Today, Red Spot Paint is the industry leader in making high-performance plastic coatings for the automobile industry.

Yet Storms says the anecdote also shows what has made Red Spot so successful over the span of a century. “We’re not in the paint business,” the company CEO says. “We’re in the problem solving business. We’ve been able to anticipate the changes in the industry.”

14 tablespoons of paint
If you’ve ever driven an automobile, it’s all but certain that you’ve also seen and felt Red Spot’s coatings – on the steering wheel, the grab handles, the dashboard, facias or on and around the headlights. “In the 1955 sales meeting, Thorson, who was the sole plastic sales person, stated that his goal was to have one tablespoon of paint on every car in the free world,” Storms says. “Today, we’re up to 14 tablespoons.”

It’s taken a lot of hard work and vision to get to that point, but over the course of a century it’s also required the ability to quickly shift gears. Evansville Paint & Varnish Co. was founded in 1903 in Evansville, Ind., when Harry D. Bourland began selling hardware and turpentine to area customers through retail stores. In 1921 the company was renamed Red Spot Paint & Varnish Co., Inc. The company continues as a privately held, family-owned business, now managed by the family’s fourth generation.

Through the early part of the 20th century, Red Spot was a very conventional paint company, primarily involved in consumer products that were sold through dealers and company stores. The familiar Red Spot logo was seen in small towns in the tri-state area of Kentucky, Indiana, and Illinois, and sometimes appeared on the side of area barns.

But Red Spot turned out to be in the right place at the right time. In the 1930s, Evansville and the surrounding region emerged as a center of the nascent refrigerator industry. The area also became a leader in the new field of plastics. In 1937, a local firm known then as Hoosier Cardinal imported from Germany the first molding machine used in the United States to make plastic studs for refrigerator shelves.

But soon a potentially more lucrative customer emerged in the auto industry. In 1939, Red Spot initiated a relationship with the Ford Motor Co. that continues to this day. The company developed coatings for the nameplates and the instrument clusters in Ford vehicles.

Thorson was a visionary and expanded the customer list to include automobile makers Nash – later sold to American Motors Corp. – and Willis, the forerunner of today’s Jeep. There was, naturally, a brief detour during World War II, when Red Spot developed an infrared cured coating with exceptional salt spray resistance for ammunition boxes, which were painted after being filled with live ammo. Conventional high temperature baking would have caused the ammunition to explode.

But over the course of the next few decades, as Detroit continued to use more and more plastics in its new car lines, Red Spot saw automotive coatings become the major part of its business. In the 1950s, Red Spot began development of vacuum metallizing coatings that allow mirror-bright finishes on plastics and by 1960 industrial sales exceeded the architectural and retail sales part of the business.

Storms said that another important moment in the firm’s history came in the early 1980s, when Ford came to Red Spot and said that it was going to use a brand-new kind of plastic called Xenoy in its new Taurus and Sable models. “They came to us and said ‘Can you paint it?’ ” Storms recalls. “And we said, remembering our heritage: ‘Sure — what is it?’ ” Taurus went on to become the world’s top-selling model. Red Spot became the first supplier of paint for plastic automotive bumpers around this time.

A global vision
By then, the company had gone global. In 1959 Thorson had raised eyebrows by traveling to Paris to exhibit the company’s products. He paid his own money for the trip because he didn’t want other members of the family to criticize him. In the 1960s manufacturing licensees were developed in England and Australia, while sales agents were selected in Japan and Hong Kong. In 2000, the firm strengthened its overseas involvement through a Global Alliance with Sonneborn & Rieck of England for Europe and Fujikura Kasei of Japan for Asia. Red Spot handles the Americas directly.

In 1991, Red Spot finally sold its less profitable retail division. The move allowed Red Spot to focus nearly 100 percent of its energies on automotive plastic coatings. In 1987, it had acquired a manufacturing plant in Westland, Mich. In 1994, Red Spot dedicated a new research and development center in Evansville to expand its product innovations. In 1998, it added an Applications Center in Plymouth, Mich.

For example, Storms notes, the company developed a better and also less expensive coating for grab handles in sports utility vehicles because the automakers found they were getting damaged by sunscreen and bug repellant.

The company is optimistic about its future, since Detroit continues to expand the use of plastic to keep both vehicle weights and costs down. Today, Red Spot has nearly 500 employees and generates in the area of $100 million in annual revenues. Storms acknowledges that the auto industry has been “a tough environment” for the last five or six years, but he says that Red Spot has been able to increase profitability by adopting lean manufacturing and other new production methods.

In the company’s second century, it’s hard to predict exactly what new problems that Detroit or other customers will bring to Red Spot. But it’s safe to predict they’ll come up with a solution.