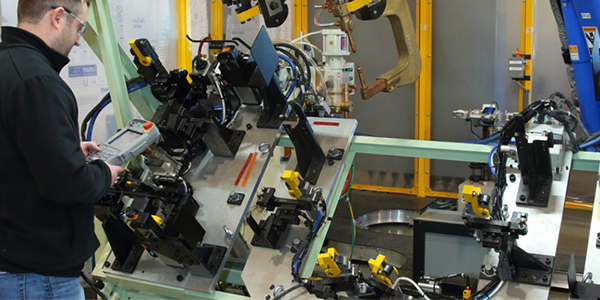 Wayne Trail Technology President David Knapke knows one direction: Up. Look toward the night sky, at the North Star, he tells employees, and set your compass in that direction. What Knapke is doing is navigating his company through the complicated web of the manufacturing supply base which, in the last several years, has taken on all the confusion of the night sky as machine builders jockey for position. But Knapke has a clear-cut mission: to work with customers to bring out their best and brightest ideas and to motivate his team members into developing those ideas into reality.

Such is the work culture at Wayne Trail Technologies, now a $26 million concern founded as a tool-and-die company in 1962, which has become a key producer of customized press room automation equipment, tube bending and fabrication equipment, metalforming automation equipment, hydroforming automation, and laser welding equipment. Becoming involved with Wayne Trail in 1994, Knapke relates that he saw opportunities to “re-engineer” the company. “I decided to change the culture and look at complementary technologies.” Wayne Trail also saw opportunities in the manufacture of ultra-light-weight trucks and SUVs; such vehicles were seen by the automotive industry as offering better economy and an overall lower cost of production. And as the steel industry heeded the call, manufacturers such as Wayne Trail also did their part in supplying equipment that could aid in ultra-light-weight design.

The company’s success is spoken in the number of vehicles it has helped build: All Dodge Ram pickup trucks last year produced in the U.S. and Mexico were built with hydroformed frames that came off of Wayne Trail’s equipment. In addition, the company has just finished an important project for Modatek in Canada, a division of Magna, a large producer of light truck auto frames. The contract, says Knapke, was valued at $11.5 million.

Acquisitions enhance operations
To enhance and complement its operation, Wayne Trail made two important acquisitions: the first was Livernois Press Automation in Michigan in 1998, which “jump-started us into press transfer technology,”Knapke says. Recently, Wayne Trail acquired VIL Laser Systems, providers of laser-weld technology, an important component in the manufacture of lightweight vehicles. Laser-weld technology enables the manufacture of, say, a door using only two metal pieces, one thick and one thin, instead of the three to four pieces that traditionally had been used. “The idea of laser-welded technology is to reduce the weight and the number of metal stampings required,” Knapke explains.

These complementary technologies go hand in hand with the company’s very conscious decision to employ new technologies in the metalforming industry for the manufacture of frames, sheet metal components and heating and air conditioning tubing.

They also gave rise to the company’s refined approach to the current tubular hydroforming process (by which a round tube is placed into a bender, then into a hydroform press where a fluid is passed through at high pressures, changing the shape, which allows the part to be processed as one piece, reducing weight and eliminating multiple welded joints. Wayne Trail complements the hydroforming process by offering innovative automated system solutions for the pre-forming of parts prior to the hydroform press and post-processing operations. Enhancing this process with these types of solutions has allowed the company to participate in projects utilizing hydroforming in the manufacture of light truck and SUV frames, pillars, bumpers, hitches (for towing) and shock absorbers. Aside from these new avenues, the company has remained true to a niche business garnered more than 25 years ago: producing tools for GE gas turbine jet engines. The longevity of this relationship is proof of Wayne Trail’s commitment to integrity and quality.

Flexbending®: Making parts better
Another frontier was in the tube bending and fabricating arena. Wayne Trail developed Flexbending® cell technology, which fills the gap in the current market for a bending cell that can be mechanically reconfigured and electronically reprogrammed to run a variety of parts. As a result of the company’s modular system concept used in Flexbending, Wayne Trail is able to integrate uncoiling, straightening, cut off endforming, welding and assembly, as well as add other operations. As an example: A customer purchased a Flexbending system to produce a family of tubes containing two bends. The customer now has a tube coming into production with three bends, but doesn’t want to increase the cycle time of the system. The original Flexbending system can be upgraded by simply purchasing an additional bending head to accommodate the new tube.

Flexbending features and benefits include multiple parts that can be manufactured on the same system; quick change tooling and servo controls that facilitate rapid changeover from part to part; high production capability, non-contact gauging systems that can be integrated with bender controls, and high-speed servo parts transfer.

Ever-expanding trail of innovation
Wayne Trail Technologies (the name is taken from the “trail” leading among several forts in the Ohio Valley area built by Gen. Anthony Wayne during the Indian Wars) has focused resources and energies on products and services that result in the consistent and continuing quality that gives its customers a competitive edge. “We offer customers the opportunity to improve their talent, imagination and resources through partnering with the innovative and quality craftsmen at Wayne Trail,” Knapke says.

New trails, new relationships
Currently, 60 percent of what the company manufactures goes to first and second-tier customers such as Magna, Tower Automotive, Dana, Lear, and others; in the last year, 30 percent of its product base was exported as foreign competitors increasingly vie for market share.

In its Fort Loramie, Ohio, facility measuring 80,000 square feet – with a second sales and engineering office in West Chicago that concentrates on laser welding – the company has come far from its days as a family owned, tool-and-die business.

“I really think we’re market driven. We have to look at what the market and the customer needs and how we can fulfill these needs. We’re an extension of their engineering department, and help them find solutions. We’ll get in early and participate in the programs and let them know how they can reduce costs.”