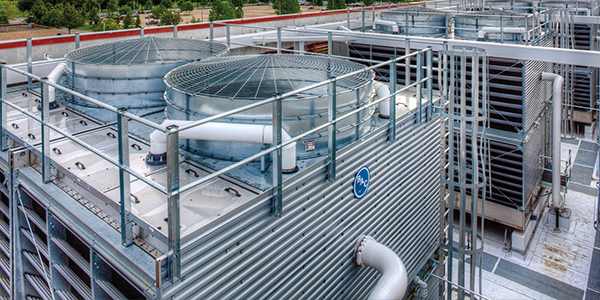 The industrial ingenuity that pioneered cooling technology in the city of Baltimore, Maryland in the 1930s has been at the helm of Baltimore Aircoil Company for 65 years, and through a worldwide network of 1,600 employees, continues to research, develop and deliver innovation after innovation.

Headquartered in Baltimore, BAC manufactures open and closed-circuit cooling towers, evaporative condensers, ice thermal storage units, microbiological controls, and heat exchangers, as well as OEM parts for cooling products for commercial and institutional buildings and the HVAC market. The company has been the industry’s standard setter for quality and marketing.

This quality is delivered to a global market that demands state-of-the-art cooling technology. In the U.S., manufacturing locations include Baltimore, Milford, Delaware, Paxton, Illinois, and Madera, California. Outside the U.S. BAC has facilities in Australia, Belgium, England, Italy, Spain, and South Africa, along with licensees and joint ventures in Latin America and across the Pacific Rim.

A history of keeping cool
It is quite an extensive reach for a company founded by a Russian immigrant who fled the Bolshevik Revolution in 1917 and who is now considered one of the pioneers of evaporative cooling technology. John Engalitchev, Jr., now enshrined in the American Society of Heating, Refrigeration and Air-Conditioning Engineers (ASHRAE) Hall of Fame, began his business in a small site in Baltimore where BAC manufactured air coils for refrigeration units used to cool movie theaters. A line of evaporative condensers followed soon after, as the fledgling field of air conditioning and refrigeration began to boom in the early 1940s. In 1943, according to Director of Marketing Communications Philip Adams, Engalitchev, who had become a true American patriot, closed down shop and joined the U.S. Navy. “He assured all the employees that they would have jobs when he returned,” says Adams, “and when he was discharged in 1945, he reopened the business and hired them all back.”

In 1956, a fire razed the manufacturing plant to the ground, destroying virtually all the company’s assets, including the engineering drawings for virtually all the products. Undeterred, Engalitchev kept the company open, setting up temporary office space in a nearby building within 48 hours, contracting out the production (including using BAC employees), and redesigning the products, most of them from memory. Remarkably, within two and a half months, BAC was shipping orders again. At the same time, tentative plans for a new plant were finalized and rushed ahead, and in 1958, BAC had opened a new manufacturing facility in its current location. The company, like the proverbial Phoenix, had risen quite literally from the ashes.

With this same kind of driving determination, Engalitchev revolutionized the evaporative cooling industry, steering the company through the development of some of the industry’s most important technological advancements. In 1968, BAC launched its V-Line cooling tower product line, a breakthrough in cooling tower technology that introduced high-tonnage capacity to modular, factory-assembled towers. (Heat rejection is measured in tons, which refers generically to the amount of heat energy it takes to melt a ton of ice in a day.) Prior to this development, cooling towers over a certain tonnage needed to be constructed on site. “The downside of field construction,” says Adams, “was the time, labor costs, and field testing. The V-Line could be shipped in one piece, having already been tested at the plant.”

Over the years, BAC has continued to develop breakthrough technology, including an advancement in coil technology that dramatically increased the amount of heat transfer per unit of surface area, an exclusive process for low-cost, durable corrosion protection, a self-feeding microbiological control, a unique belt-drive fan system that offers cost-effective, trouble-free performance, and the revolutionary FXV/CXV line of closed-circuit towers and evaporative condensers, which combine maximum efficiency with easy operation and maintenance.

New HXV earns AHR distinction
Recently, BAC did it again. In January, the company introduced its new HXV cooling tower at the AHR Expo in Chicago. The new product is a hybrid wet/dry closed-circuit cooling tower that combines the best in both air-cooling and evaporative cooling technologies. Even before its introduction, BAC had garnered the AHR Expo Innovation Award in the cooling category, selected by a panel of seven ASHRAE-appointed judges (ASHRAE is an Expo sponsor). The HXV is yet another example of what has made BAC the world’s leader in cooling towers.

Towers of Strength
At the heart of BAC’s technological ingenuity is the company’s Research and Development facility, located at the company’s headquarters in Baltimore, which houses one of the largest evaporative cooling test facilities in the world. “It’s a working testament to BAC’s commitment to innovation and performance testing,” says Adams. The facility allows company engineers and technicians to simulate a broad range of environmental and system-operating conditions which the product encounters during use. Engineers and technicians use computer modeling to screen its concepts and conduct tests on equipment that ranges in size from small prototype modules to full-scale, field-erected cooling towers. They also test a wide range of materials and components, using fan development, static and dynamic stress evaluations, accelerated aging and corrosion testing, hydraulic testing and wind tunnel testing. The facility’s work has resulted in hundreds of patents for BAC, covering its complete line of cooling and thermal storage products.

BAC has been an industry leader in yet another area, industry certification. For the past 20 years, the company has played a leading role in the development and industry acceptance of certification programs of the Cooling Technology Institute (CTI), an independent organization that develops codes and standards for evaporative cooling equipment. “We have a long-standing commitment to building the highest quality and best performing products in the industry,” says Adams, “and we prove it with independent certification. Our commitment to CTI is built on the belief that industry-wide adoption creates a level playing field where the best technology wins.”

BAC also was one of the first companies in the industry to be ISO 9001 certified, which means that every aspect of its manufacturing and management meets or exceeds international guidelines. “ISO 9001 certification means we deliver proven quality,” says Adams.

Cool Future
Product innovation has led the way to the top of the industry for BAC, and will continue to lead it in the future. The launch of the HXV, for example, is a signal for what’s to come in the industry. Adams also foresees an increasingly strong market for BAC’s closed-circuit line in general. “There are many applications for these products in industrial and power/process-type cooling,” he says. “Close-circuit cooling is also ideal in HVAC applications where water-source heat pumps are used to cool buildings, or wherever the cooling fluid needs to be isolated from the environment.”

Another exciting area is ice thermal storage. “Basically, this is an efficient cooling system that allows you to save costs by shifting energy use,” explains Adams. “There are times of day and times throughout the year when energy costs spike, such as between 3 p.m. and 6 p.m. and during the summer. What ice thermal storage allows you to do is use energy to freeze ice at night when it is relatively inexpensive – sometimes even free – and then use the cooling properties of melting the ice later to cool during these peak times. It leads to dramatic reductions in energy usage for air conditioning.” Adams also notes that ice thermal storage has been in use for years in thousands of installations around the world. One such installation is not far from BAC’s headquarters; both the Camden Yards ball park and the Baltimore Convention Center are cooled with ice thermal storage. “And in this era of energy deregulation, ice thermal storage gives you the flexibility to manage real-time pricing. When you have such events as last year’s energy crisis in California, this can help avert a lot of risk.” According to Adams, these units have very low capital costs, and since they don’t have many moving parts, operation and maintenance are minimal.

The sluggish industrial market of the past two years has had little effect on BAC. Adams says, “As we move out of this period of uncertainty toward a more upbeat economy, solid companies such as BAC tend to emerge relatively stronger, and that’s what we’re seeing. By staying focused on growth and keeping with our tradition of constant improvement, BAC will continue to operate independent of the cyclic construction market. We’ve been doing it for 65 years, and we’ll be making history for the next 65 years, too!”