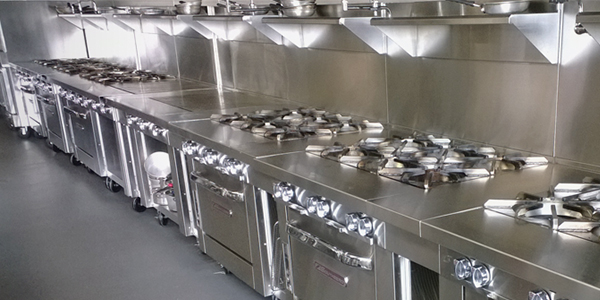 Tom Hotard likes driving a van filled with a dozen or so Southbend employees to the dealers that distribute the ovens made at South-bend, the recognized leader in cooking equipment for commercial and institutional kitchens. Hotard also happens to be the president of Southbend, but that doesn’t keep him from taking the wheel of the van on these road trips that help reduce the layers between Southbend employees and the end users of Southbend products.

“I could present employees charts and graphs that show sales trends and data about inventory, but bringing them to the dealers to see where the fruits of their hard-earned labor are going and how our products are being sold is the best way for all of us to learn the business,” said Hotard, who also takes that opportunity to instill the importance of the commercial ovens made at Southbend.

“I tell them, ‘Just imagine that you’ve saved your whole life to open up a restaurant and you choose to use a Southbend oven, but it doesn’t work,’” said Hotard. “That really gets right down to it, why we put so much effort into perfecting our products because we know that the work we do really affects other peoples lives, other people’s dreams.”

The speech, not to mention the innovation and remarkable overhaul of Southbend since Hotard took over in 1995, has worked. Southbend, with 200 employees in Fuquay-Varina, N.C., has tripled in size to more than $50 million in sales over the last eight years, says Hotard.

A heated history
But Southbend wasn’t always as “hot” as it is now, despite its long proud history. Southbend was started as Malleable Steel Range Manufacturing Co. by Harry Engman, William Kizer, Lew Matthews, and Jacob Woolverton in Southbend, Ind. About 10 years later, the company was taken over by the Woolverton family, to make a line of domestic coal and wood burning stoves.

In 1993, the Marathoner Gold convection oven was introduced. Three years later Southbend introduced more new products than any other year, including: SilverStar Convection Oven, R-2 Steamer and the 400 Series range. By the next year the company realized record sales and shipments, along with the introduction of more new products, including the award winning Simple Steam Countertop Steamer. New products included the Simple Combi Oven and medium duty charbroilers, griddles, fryers, and ranges.

“Cooking with steam is extremely versatile and has many advantages over other cooking methods,” said Hotard. “Steam cooks about 30 percent faster than other methods, prevents foods from drying out, and is very gentle yet it allows very even
heat penetration.”

Turning up the temp
Entire industries, like companies, can get complacent. When that happens it presents an opportunity for a brand to break from the pack through pioneering innovations. Such was the case with Southbend.

“There still is a complacency in the commercial cooking industry about the ability to bring more and more performance to what seems to be a simple product,” said Hotard, who re-directed Southbend in two ways, by re-focusing on engineering excellence and on integrating with the supply chain.

Cooking in the field
Hotard instructed his team to get more intimately involved with the dealer network to better ascertain what end users wanted in cooking equipment. Southbend then applied what it learned in the field in the manufacture of better ovens and steamers. Said Hotard, the new attention to the needs of dealers is what enabled Southbend to really take off.

One key takeaway was the desire among dealers to offer configurable cooking lines. In other words, sell a commercial cooking manufacturer that would design its products to fit the design of individual commercial kitchens rather than simply build ovens without regard for the space constraints of the end user. Hence Southbend’s
Platinum Series.

“The company makes sectional batteries that are designed to withstand the rigors of high-volume restaurants, hotel kitchens, and institutional kitchens,” said Hotard. “Heavy duty ranges, griddles, charbroilers, stock pot ranges, fryers, and broilers can be combined for a 100-percent custom line-up to fit the needs of any high-volume operation.”

By building its name among the large independent dealers, Southbend also improved its base among some of the country’s most well-known restaurant chains: Wendy’s, Bob Evans and Kentucky Fried Chicken.

Bright future
Southbend, a division of the Middleby Corporation, is recognized worldwide as one of the top leaders in heavy-duty, core commercial cooking equipment and considered a lead broad liner in product offerings.

“Our 100-plus years of quality products and services is a result of Southbend’s unwavering commitment to the industry we serve, our customers as well as our employees,” said Hotard. “We strive to be the most reliable manufacture of quality cooking equipment and the easiest company to do business with.”

The Middleby Corporation is organized into domestic divisions — Middleby Marshall, Southbend and Toastmaster, as well as two international divisions, Middleby Worldwide and Middleby Philippines Corporation. This gives Southbend an unparalleled ability to supply the foodservice industry with complete kitchen packages on time, every time, anywhere in the world.