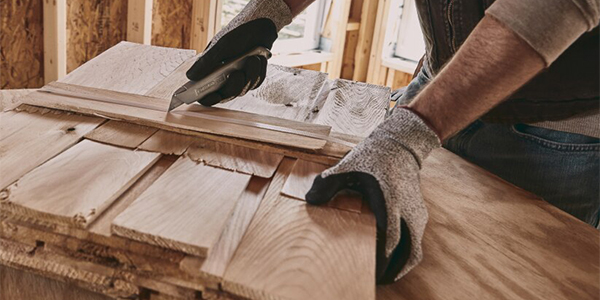 It’s hard not to be optimistic when you’re the leading carpentry supplier in Arizona’s Valley of the Sun, the booming region around Phoenix when new subdivisions seem to sprout with every morning’s blazing desert sunrise.

So two years ago, when executives at Schuck & Sons Construction Company, Inc., sat down to draft a 10-year-plan for the firm, they projected a healthy annual growth rate of 8 to 10 percent a year, which would more than double the size of Schuck by the end of the decade.

Maybe it’s already time to draft a new plan. In 2004 alone, Schuck grew by a whopping 52 percent as it expanded its reach across the Southwest and not only continued to work with and supply the nation’s leading builders on their Arizona projects, but also branched out into several new areas, including a subdivision where Schuck is taking on the role of lead developer.

Craig Steele, the president and CEO of Schuck, which is headquartered in the Phoenix suburb of Glendale, said that while it will be hard to top last year’s pace, he expects that 2005 will be a rousing success as well. “The focus is both on internal growth and growth by acquisition,” he said. “In fact, we’re working on a couple of deals right now.”

Owned by employees
The company’s growth is good news for all of the firm’s 1,400 employees, most of whom work in Arizona. That’s because an employee buyout of the privately held Schuck, which had been in the works for the past several years, was recently completed, meaning that workers have a 100 percent stake in profits. The employee stock ownership plan was completed in July 2003.

Steele explained that the plan had been in the works since the founder of the once family-held firm died in an automobile accident in 1990. He said the founder’s heirs wanted “an exit strategy,” and everyone is pleased with how the eventual transition worked out.

“I hear comments every day about reducing waste – people say, ‘That’s my ESOP (employee stock ownership plan) money,” Steele said with a laugh. He said the employee ownership system has spurred middle managers to boost productivity, while rank and file workers are getting used to their new position.

“We have production goals in every area of the company, and a large part of that is reducing waste,” added Steele, who said that his managers are very conversant in the seven tools of effective leadership and other productivity boosting methods. Once a month, a quality/productivity manager for Schuck meets with department heads to develop new strategies for meeting some ambitious goals.

The results of those efforts have been very successful. The company’s truss plant produced about 27 million board feet in trusses in 2005, roughly a 50 percent increase over the prior year. In the meantime, the 98,592 doors manufactured at that facility was some 20,000 more than in 2003.

It has been through innovation that Schuck has developed its leading role in the Arizona market for new homes, working with industry frontrunners such as Toll Bros. and Ryland Homes. The company also works with area builders such as Shea Homes, Taylor Woodrow, and William Lyon Homes. Schuck is now in the process of completing more than two decades of work with Del Webb and Pulte on Arizona’s famed Sun City retirement community.

Turnkey service for builders
Although the fast-growing Arizona market is its base, Schuck also does work on construction projects in neighboring Nevada and in Southern California, and Steele said that the company is likely to slowly expand its geographic base over the coming years. However, finding new work in Phoenix is not that much of a problem, since statistics showed that the city surpassed Atlanta to become the nation’s No. 1 market for new homes in 2004.

One reason for that has been that unlike many of its rivals, Schuck has offered turnkey services for developers, both supplying lumber for a job and then sending its staff of carpenters to the site to do the actual work.

Schuck has also long been a master of innovative techniques and products. For example, it was the first contractor in its region to market so-called I-joists, which are manufactured from smaller-diameter trees that are helping to spare so-called “old growth” forests.

Last year, Schuck made a significant acquisition when it bought G-L Industries, a small manufacturer of laminated beams that is located in Magna, Utah. “We use a lot of these, so it was a natural for us,” Steele explained. About 50 people currently work in this newest addition to Schuck. The firm also owns a division called Dewey Lumber and Truss.

Perhaps the most exciting news at the company is the launch of the very first subdivision project in which Schuck – under the banner of Schuck Homes – is playing a role as lead developer. In recent months, it completed building the model homes at Weaver Mountain Estates, which is located in Congress, Ariz., in the booming Valley of the Sun.

Steele said one reason that Schuck Homes chose this locale for its first development is that none of its main customers are currently working nearby. “But our thought has been to diversify a little, in case there is a downturn in the economy” he said. “That way, we will still be able to grow the company even in a down market.”

So far the project – which offers three-bedroom, two-bathroom homes built of stucco with tile roofs – is off to a rousing start. Of 54 lots available for development, some 16 have already been sold. “We’re supplying the trusses and the lumber for the project, and the doors and the labor,” Steele said. With land at about 20 percent of the cost of a new home and labor another 20 percent, he said Schuck is well positioned to capitalize on its new strategy.

What’s more, officials at Schuck aren’t expecting a major downturn in the economy to come any time soon. Steele noted that experts have been predicting – wrongly – an end to the housing boom for most of the last 10 years, and “I think it’s going to be good for the next several years. Interest rates will creep to a normal level but they’re still good. Even 6 percent is historically very good.”

And when the housing market is good, there’s no better place to be than the Valley of the Sun.