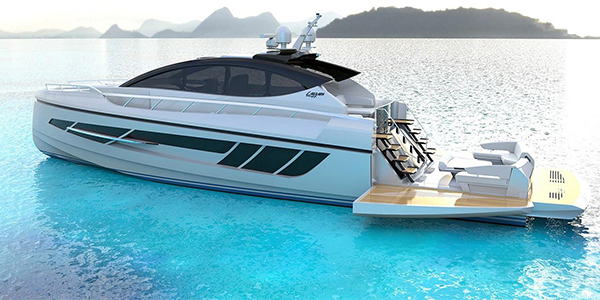 Vince Lazzara was working as a chemical engineer for DuPont when he came across a product called fiberglass. He decided he wanted to take that material and build large boats. In 1956, the Chicago native constructed the first large fiberglass sailing yacht and forever changed the business of boat building. He built himself a 40-foot boat. It was for hobby at first – until people began asking him to make more.

Now, 47 years later his sons, Brad and Dick, still run the family owned company based in Tampa, Fla. Three generations of Lazzaras work alongside 300 dedicated craftsman to build the limited number of personalized yachts the company produces each year.

Rich Lazzara, Vince’s grandsons and the director of marketing, says the business caters to a clientele looking for a high-quality product. Other boat-builders, he added, don’t offer the semi-customization as Lazzara. The company’s slogan is “Imagine Perfection.” But it is more than just a slogan, says Lazzara. No other builder can craft a product that can combine the speed, stability, sophistication, space, support and style like a Lazzara Yacht. “The fact that we have a limited production means that we have a high level of customer support, and that is extremely well known.” While Lazzara can name a few celebrity clients, including Nascar drivers, Jeff Gordon and Jeff Burton, “the majority of our clients are entrepreneurs of mid-size businesses, not Fortune 500s.”

The Lazzara family was not always in the business of building a limited number of such large and customized yachts. In the 1970s and 80s, it produced about 200 40-foot to 65-foot boats per year. “We have learned over the years that there are several ways to do business and create volume,” says Lazzara. “Back then, we had 600 employees and not one of our boats sold for more that $1 million. Now we are at the other extreme. Our yachts sell for an average $4 – $8 million and we build eight per year.” Today, says Lazzara, this customized approach seems to work best. “People are into customization. Mass production was something learned in the 1900s. The 21st century will be about mass customization.”

The 2003 Line Up
It took years of preparation, designing and redesigning the yacht as well as the factory and shipyard to produce the yachts that comprise Lazzara’s 2003 lineup. The company typically builds only eight of its products a year. This year, it plans to produce two 106-foot and six 80-foot yachts, which will be available in convertible or Skylounge. All phases of production are conducted at Lazzara’s factory, which is housed with its corporate and sales office, fronted by an Italian-style villa that extends all the way back to Lazzara’s private docks on Tampa Bay. Depending on the number of back orders, Lazzara’s engineering concepts and assembly techniques allow for state-of-the-art construction from start to finish in as little as eight months time.

Looking at this new breed of customized products, in 2002 Lazzara released its biggest yacht yet at 106 feet. The Lazzara 106 has three decks of contemporary sleek styling and a handcrafted interior. The lower deck includes a master suite, three VIP staterooms, a sitting room and captain and crews quarters. On the main deck, there is a salon, galley, outdoor deck and dining room. A pilothouse and an open flying bridge comprise the bridge deck.

Lazzara’s other model, the 80 SC, debuted in 2001 and was created to combine the ease of maneuverability of a smaller boat with the roomy interior found in one of a larger size. It performs magnificently in all sea conditions and is powered by twin DDC/MTU 1,300 hp engines. Both crafts were designed and tested using a state-of-the-art computer modeling system that duplicates various sea conditions and has thus led to the creation of the most efficient hull design. The yachts also come equipped with Lazzara’s proprietary PC-based Integrated Ship Information System (ISIS). This diagnostic monitoring system records 64 different functions such as engine temperature, fluid levels and pressures.

Customer Service Plus
Lazzara doesn’t want its relationship with the owner of its yachts to stop in its sales office. The builder wants to support the owner’s yachting lifestyle in every aspect.

To ensure that a new owner can operate the craft with pleasure and confidence upon taking delivery, Lazzara requires the owner learn the basics of his craft, its workings and systems through its “Lazzara Yacht University” based at the Tampa facility.

The builder also offers the first and only pro-active maintenance and customer support program in the yachting industry. The SeaCheck program is a comprehensive annual on-board assessment of more than 1,200 items by factory-trained technicians of an entire yacht’s operating systems. The results of this thorough examination and testing are then produced in a hard cover book given to the owner to be part of the ship’s permanent records. If the owner has a yacht insured with Chubb Insurance through Allied Marine Risk Managers, Inc., the cost of the annual SeaCheck is paid by the insurance company, a benefit that represents thousands of dollars in savings over the life of Lazzara yacht ownership. Lazzara also has an International Yacht Sales Brokerage Division, which deals in pre-owned Lazarras and other fine yachts. It is located at the Ft. Lauderdale Marine Center on the New River and lists yachts worth over $2 million on its Web site www.lazzarayachts.com. The division sells about 15 boats a year, some of which come with a pre-owned yacht warranty. Lazzara is the only builder to offer such a program, which it began in 2000 and calls SeaFit.

A Redesigned 80
Despite the success of the 80SC, Lazzara has not stopped looking for new levels of perfection. It is planning a redesign of the popular yacht, which will be “sleeker and more open, more European,” Lazzara says. In general, he explains, yachts are becoming more popular among people who do weekend boating and are looking for speed and style. “It will have a larger engine and go faster.” Specifically, Lazzara is trying to tap into a niche already populated by European boat builders. While Lazzara sells only about two boats a year in Europe and South America, there is a segment here in the U.S. that also wants to buy these European-style boats.

Speeding Time to Market
Part of Lazzara’s ability to spot and take advantage of new trends depends on its production speed. Building boats like this takes a lot of capital investment, says Lazzara. It may take millions of dollars and several years to develop a new product line. Lazzara’s research staff is working to develop new technology that can cut the time and cost of production. Its goal is to sidestep the time and labor intensive process of developing tooling for each model. Through the use of computerized technology and a 5-axis router, Lazzara hopes in the next 10 years to “cut” right to the finished part. “Cutting to a finished part would be the holly grail for our company. Nobody is even close to doing that yet,” he says. But then again, back in 1956, nobody was building large boats out of fiberglass. Even for a hobby as time honored as yachting, tastes and styles change quickly, and his family, said Lazzara, is committed to producing yachts that will match those changing demands and capture the attention of each new generation of yachting enthusiasts.