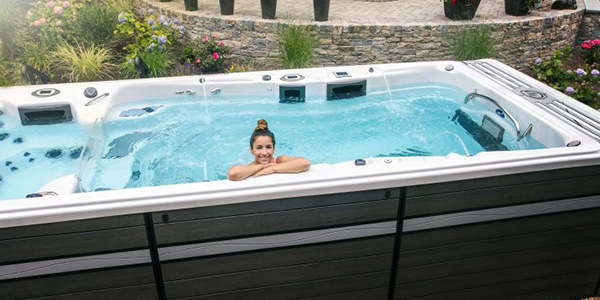 Evidently the White House believes in the therapeutic and recuperative powers of Master Spa LSX 1050. That product was installed recently at Camp David, the wooded retreat where President Bush and other world leaders meet to make decisions that determine the fate of nations. If a Master Spas product can relieve stress following summit talk, imagine what it can do for citizen consumers.

The federal government is just one of many Master Spas customers. The company has realized a remarkable 45 percent annually growth rate since its new ownership took over in 1996. (The company has been operating for more than 25 years). And with baby boomers, its primary target demographic, hitting middle age, future sales growth seems certain.

“Baby boomers are just starting to feel the aches and pains that come with aging and a Master Spas product is a great way for them to rejuvenate,” said Master Spas President Bob Lauter. “But boomers are not our only customer. The market is starting to skew younger, and more and more affluent people are able to purchase our products, which range from $5,000 to $15,000.”

Bye-Bye Big Box
A number of years ago, when Lauter and some fellow investors acquired Master Spas from Fort Wayne Pools, there was a major problem with product distribution.

Lauter, a former Fort Wayne Pools executive, knew the spa business well, having helped to turn around several other spa shops. So when he learned that Fort Wayne Pools was spinning off spa division, he saw an opportunity he couldn’t refuse.

“In a sense I had been somewhat entrepreneurial in helping a few spa companies reverse their declining sales,” said Lauter. “So it made sense to finally put my own money into a company I could lead, along with some trusted associates who also knew the business.”

According to Lauter, Fort Wayne Pools, and others in the spa industry, was relying upon big box stores like Home Depot and Lowes Home Improvement Warehouse to retail spa products. Although spas are getting easier and easier to maintain, they are still a complicated product requiring specific expertise beyond that possessed by mass retailers. Lauter saw that more than 15 percent of spa business was going through the big box chains. He immediately put an end to that at Master Spas. He directed all the company’s product development on marketing efforts toward establishing and nurturing solid relationships with a spa dealer network. Not only has it worked, the industry has followed. Today less than 7 percent of spa business is done through big box retailers.

“The more complicated the product, the harder it is to sell at Home Depot and Lowes,” said Lauter. “Those mass merchants had decided to downplay the spa category and it was impossible to influence them otherwise. So we pulled out and concentrated on delivering dealers the most high quality spas on the market. It was a strategy similar to that used by Lexus in the automobile industry.”

Hot tubs and spas have changed greatly over the last half-decade and Master Spas has been the leader in innovation. Said Lauter, the company was the first to introduce a pop-up stereo and television system. Previously other manufacturers were putting in stereos but none had truly overcome the problem of moisture, until Master Spas.

“Our engineering team partners with vendors with the most sophisticated technology to perfect innovations,” said Lauter. “We have tried to look for the cutting edge of technology and design and we push our products forward every single year, making our products more sellable and more reliable. We consistently put out two to three new products per year, far more than the competition.”

Before any Master Spas products hit the market, Underwriter’s Laboratory (UL) an independent product testing company, literally hits the products with a variety of objects. For example, testers from UL swing five-pound lead balls directly into the glass casings that protect the television and stereo systems to determine if glass will break. They also conduct severe burn tests on the spa plastic to ensure that the products are 100 percent reliable.

“Ease of maintenance continues to be an area of critical importance to us,” said Lauter. “We have made major improvements in making our spas the most maintenance free with big advancements in filtration such as radical approaches like including special minerals in filters to help prevent the growth of bacteria.”

Relaxation is another focal point for the company. For example the Master Blaster Foot therapy system consists of jet clusters with 15 individual nozzles for a total of 30 powerful jets. The Master Force Bio-Magnetic therapy system applies magnetic therapy to pressure points on the neck and back with the strategic placement of powerful magnets behind the Aqua Pressure seat and in the neck area on the reverse molded seat.

Master Spas attention to detail and craftsmanship led to the LS750FST earning a “Best Buy” award from Consumer’s Digest in the premium spa category. Ernst & Young recently acknowledged Lauter himself with the award of Regional Entrepreneur of the Year in the large manufacturer category.

While Master Spas is based in the Midwest and has a strong dealer network there, they also have dealers all over the U.S., Canada, and Europe for a truly global coverage.

Clearly, Master Spas is a company ready to face challenges because it possesses a management team and quality staff that knows how to handle growth while maintaining high levels of satisfaction among its customer base.