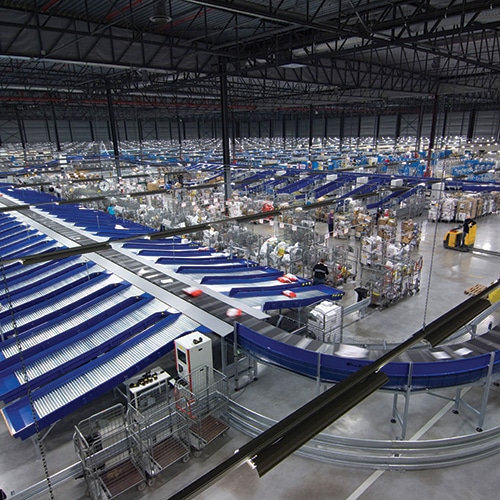 Since then, the company has evolved and grown to become a billion dollar global enterprise, integrating complex material handling systems across four industry sectors, helping companies of all sizes bring their supply chains and distribution centers up to speed in today’s dynamic business world. Martijn van der Lande, grandson of the founder and President Warehouse Automation, Parcel & Postal NA for the company, talks about the past and present state of Vanderlande Industries, as well some exciting news about the future.

For the bigger businesses around the world, the question isn’t where the demand is going to come from, but more about how they’re going to effectively manage their supply chains, and distribute their products to their customers in an efficient manner. In regards to baggage handling, parcel and postal, and warehouse automation, Vanderlande Industries provides solutions that do just that, while also extending maintenance and repair services to each of their systems and third party programs as well. Van der Lande says his company has worked tirelessly over the years to establish itself as a trusted name in each of these sectors, and their balanced approach has led to a balanced stream of business. “We basically have four verticals, or business sources, and if you look at it from a ten year perspective, each of them represents, more or less, 25 percent of our business,” he says, adding, “we are very pleased with our significant roles in each of these areas.”

While the company has been steadily expanding throughout its expansive history, van der Lande says that growth really began to surge at the beginning of the millennium, and hasn’t shown any signs of slowing down. “At the turn of the century, with everything that happened, such as the beginning of ecommerce’s rise and the events of 9/11, warehouses and material handling in general became much more sophisticated,” he says, adding, “there became a much greater need for our capabilities in the airport and baggage handling business, as well as the warehousing and parcel and postal industries.”

Instead of folding under new levels of demand, Vanderlande Industries took the business in its stride and today serves as one of the world’s premiere options for each of the industries they serve. In particular, with respect to baggage handling, van der Lande says, “we are number one or two in the world based on turnover and projects executed.”

Van der Lande says that the industries they work with vary in their overall makeup, and the manner in which they impact them varies as a result. “You look at baggage handling, there aren’t a lot of players so we find ourselves doing large, comprehensive projects,” he says, adding, “warehouse automation, on the other hand, is a very diversified and segmented market, so we focus on specific sub-markets within them, such as fashion and food retail.”

He says that the postal system industry is currently experiencing a strong decline in letter volume, so they have been actively marketing and implementing parcel sorting systems to help companies in the industry transition smoothly amidst new trends in their product flow. Covering all three of these industries is their service and maintenance program, but, again, van der Lande says their role in such varies from company to company. “Our role in maintenance depends heavily upon the customer’s capabilities, as some will have everything in place internally, some will have some sort of presence, while others have none at all and require us to be onsite at all times.”

In parcel and postal, van der Lande says that companies like UPS, Fedex, and DHL have a strong legacy of being highly skilled in technical affairs, and many of them already have operation systems in place to handle any issues, so their need is less. However, referencing what is perhaps his company’s ‘crown jewel’ project in North America to date, an implementation of the UPS’ Worldport’s sorting system during the mid 90s, van der Lande says as systems get more complex, even these bigger companies will need some help. “We have a nice history with UPS, and serve as one of their key integrators, but with respect the Worldport facility, which is the largest parcel landing system in world, we still are working with them in an ongoing relationship by ensuring that everything in the Worldport’s system is up to date and optimized for changing needs in today’s world.”

With regards to baggage handling, he says, “we have a good amount of customers that only need a support contract, where we can step in and help out with an issue, if they cannot solve it first.” However, he says there are also a great number of companies in the industry that already have third-party systems in place, but require full-time assistance on the floor to operate and take preventative measures should they be needed. “There’s a good amount of companies in baggage handling where we come onsite and work there permanently and, more or less, learn their systems and perform maintenance, helping their system adapt to new requirements and changing environments,” he says, adding, “Vanderlande has a total of 19 onsite teams in the U.S. baggage and handling industry, totaling about 350 employees.”

Van der Lande says this is a strong part of his company’s workforce here in North America and he expects it to continue to grow. Van der Lande says the area that requires the most maintenance on his company’s end is in warehouse automation. “On the warehousing side, we see the greatest need for the presence of our people onsite, given the complexity of the system and the software that is being utilized.” He says that a lot of companies in the fashion and food consumer industries, which they primarily target, only have a few warehouses throughout the United States and don’t have the infrastructure in place when it comes to maintaining the automation side of their warehouse as a result.

One of these companies is Urban Outfitters, for whom Vanderlande has already installed two of their warehouse automation systems in their facilities, and are set to implement a third in the clothing company’s new 1,000,000 square foot facility in Gap, Penn.

While there are plenty of positive things happening for Vanderlande Industries in the present, the company has even more exciting prospects coming in the future. One of these is their new DAPTO shuttle technology, a highly flexible storage, retrieval, and transportation system, which van der Lande believes, “brings a revolutionary concept to the marketplace.”

“It’s a full roaming shuttle, in that it can maneuver in all three directions, aisle to aisle, and up and down at any height,” he says, adding, “it enables you to have an extremely high capacity and density of storage.” Van der Lande says part of the motivation behind the development of the ADAPTO technology was in response to increasing labor costs, combined with diminishing warehouse space and small orders with short delivery times. “This system provides companies with scalability, product availability, cost efficiency, and operational excellence,” he says.

The first ADAPTO system was recently sold in Europe, and while it has yet to be implemented, van der Lande believes its expected success could soon open to the doors to its arrival upon the shores of North America. “We tend to use Europe as our launching platform for new products, given the proximity to our headquarters in the Netherlands, but I’m excited about its future impact here in North America.”

And that future impact, in general across their company, is what really excites van der Lande about his company’s presence in North America. He said he is quite optimistic about 2014, predicting a growth between twenty and twenty-five percent between parcel and postal, warehouse automation, and baggage and handling. He says the growth is a result of the marketplace is beginning to come around to the significance of e-commerce and automation and his company’s role in it. “We showed one of our customers recently the financial benefits of automating their facilities versus their established manual solution of handling,” he says, adding, “basically they were using conveyors belts and a huge workforce on the floor, but after seeing the benefits of our automated systems relative to his business, they did a complete 180 and now refuses to use anything but automation in their facilities.”

And that’s where Vanderlande Industries excels as a company. Van der Lande says they stick to certain verticals of business and don’t try to branch out too because “if we have to go through the learning curve, then we have little added value.” However, adhering to this mindset, they have become experts of their craft in their own respective divisions. “Our end goal is to make a meaningful impact on a company’s supply chain, their distribution practices, or both, using only the best breed of products,” he says, concluding, “because we are only as good as our last project and a happy client means a lasting partnership, something we value greatly.”