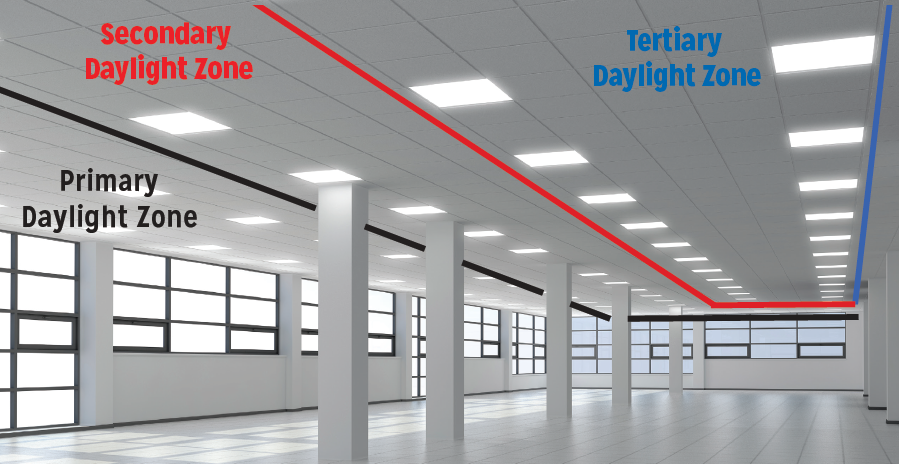 Daylight harvesting – this crop is spreading

Building energy code requirements are the main factor driving the use of daylight harvesting. The concept is also being used in other general energy-efficient lighting designs that seek to reduce power costs and save money on energy by dimming electric lights in response to available daylight.

In the past decade, code requirements have grown ever-stricter; nearly every state in the U.S. now requires some form of control of fixtures in commercial and institutional spaces. At the top of the pyramid is the ASHRAE code (ANSI/ASHRAE/IES Standard 90.1-2013 – Energy Standard for Buildings Except Low-Rise Residential Buildings), effectively the country’s model energy code. The latest version added significantly more stringent requirement to daylighting controls.

State codes must meet or exceed the ASHRAE code, or alternatively, meet the International Energy Conservation Code (IECC), which also requires some method of automatic shutoff. This is often achieved by using occupancy sensors. 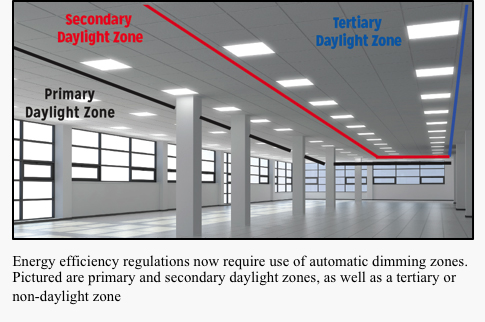 One state that has chosen to go far beyond the ASHRAE/IECC requirements is California. Title 24 Energy Efficiency Standards for Residential and Nonresidential Buildings (Title 24 Part 6 of the California Building Standards Code), aggressively regulates indoor lighting energy. Title 24 limits the allowed lighting power in watts installed in the building and requires basic equipment efficiency, as well as lighting controls that permit efficient operation. Automatic demand response-capable control systems are required in all buildings 10,000 square feet or larger.

Title 24 has been in place for quite some time, and the daylighting requirements have been tightening in recent years. For example, the 2010 version of Title 24 required manual control of only the “primary” daylight zone – whose depth equals the window head height. So, if the ceiling height was 10 feet, there had to be some method of control of at least some of the fixtures in the 10-foot-wide daylight penetration area from the window wall. An example would be switching every other light, every other row of lights, or some of the fluorescent lamps in a multi-lamp fixture.

In the latest update to the Title 24 standards, automatic control of lights in offices is required in both the primary and secondary zones. Similarly to the “primary” zone, the depth of the “secondary” zone also equals the window head height. Therefore, in a space with a 10-foot ceiling height, the secondary zone would be 10-20 feet in from the window wall. The significant changes for nonresidential indoor lighting include an increased number of steps for mandatory multi-level lighting controls, new requirements for bi-level occupancy controls in some spaces, and a requirement to shut off lighting completely during unoccupied times in most space types, with limited exceptions.

While California was the first state to pursue daylight harvesting, other states are hot on their tail. For example, Kentucky has recently issued regulations requiring automatic lighting controls in primary and secondary zones (based on ASHRAE 90.1-2013) and other jurisdictions are beginning to follow suit.

It should be noted that forces other than regulatory requirements are also driving use of dimmable fixtures. One key factor is that LED fixtures are now a viable option for almost every application, which was not the case even five years ago. LED fixtures are almost always supplied with dimmable drivers, making them extremely easy and inexpensive to dim compared to dimming fluorescent ballasts.

Unlike fluorescent fixtures, the market has essentially standardized on providing dimmable LED drivers, typically using 0-10 volt control signals. There is therefore no significant premium to using fixtures that are continuously dimmable in a full range (for example, from 10-100 percent). There are other methods of dimming fixtures, for example the Digital Addressable Lighting Interface (DALI) standard, but this also requires two extra low voltage cables, similarly to the 0-10V protocol.

California is a huge market for cable manufacturers. It is therefore little wonder that manufacturers are developing products to help companies respond to regulatory trends that seek to save energy and reduce power costs by dimming lights proportionally to the availability of natural light. New limits are appearing in ASHRAE and IECC codes, and manufacturers will have to respond with controls to meet the limits.

Daylight harvesting requires lighting systems that provide automatic dimming based on how close you are to the windows and how much daylight reaches the task surfaces (for example, workstations). Photosensors are needed to pick up how much daylight you are getting through the window walls or skylights from the sun. Automatic lighting controls must be able to dim the fixtures closest to the windows (in the “primary” zone), depending on how much light hits the task surfaces. The same is true for the “secondary” zone. Both Title 24 and ASHRAE 90.1 specifically state that fixtures in each zone must respond separately to the amount of daylight penetration, thereby necessitating multiple zone controls.

Although controls for dimming fixtures in any remaining area (anything farther inside than the “secondary” zone, an area often referred to as the “tertiary” zone) are not required by codes, certain spaces may still benefit from having all of the remaining fixtures respond to whatever amount of daylight does actually penetrate far enough into the space. This works well for open plan office spaces with no cubicles, a new trend in office design. 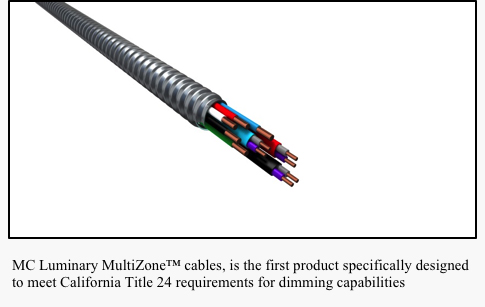 With control for up to three dimming zones, the new cable combines line-voltage electric lighting and low-voltage control circuits within a single interlocked armor. One cable can replace up to three traditional cables or three power and three control pair cables. The cables were developed with multiple PVC jacket color options matched to the power conductor colors, which makes them work especially well in retrofit situations. Also offered are neutral per-phase constructions. By combining all required conductors and phases under one armor, the new technology can replace up to six individual cable runs, increasing productivity and reducing costs.

Unlike wireless controls that use radio frequency or Wi-Fi to control dimming, this new cable technology offers a secure hard-wired system that eliminates any potential concerns about unauthorized network intrusion. While there has been much discussion of use of wireless lighting controls in buildings, especially for retrofitting to LED fixtures, wireless transmission oftentimes results in security issues. In addition, signal propagation problems have not been completely eliminated in all of the new wireless control systems.

Daylight harvesting is complex and must be adapted to what people are actually doing in specific spaces. Success is more than simply installing and turning on photosensors and occupancy sensors and using them to turn on, turn off, or dim lights in office spaces. One must consider a variety of other variables, including the time of day, window coverings, exposure, and time of year.

For example, in 2003, the Lawrence Berkeley National Laboratory (Berkeley Lab) worked on a daylighting project for the New York Times headquarters building in New York. The Times was interested in whether using dimmable lighting, automated shades, and the underfloor air distribution system would let them shed peak loads during critical periods when there was a likelihood of an electricity brown-out or black-out. The study concluded that they could achieve small reductions in peak demand above and beyond using normal energy-efficient operations, but these gains came with a penalty to the quality of the workplace environment. However, by 2011, when the Times conducted further studies with the Berkeley Lab, the research concluded that significant energy and peak demand reductions could in fact be attained, while satisfying occupant requirements for a high quality productive workplace. [1]

Berkeley Lab later developed a lighting controls specification based on the New York Times daylighting efforts. Their goal was to help design professionals by providing an example of a successful daylight harvesting, fully dimmable lighting controls system, based on the philosophy that occupants of commercial office buildings prefer natural light to electric light. The lighting control system is DALI-based, with dimmable fixtures throughout the interior space, which allows the system to dim the electric lighting in response to the presence of daylight. It uses occupancy sensors, photosensors, switches, and a time clock to control the lighting in the interior space on each floor. The goal is to provide electric light only when the space is occupied and to provide as little electric light as is necessary to achieve a given department’s lighting needs. [2]

According to the Berkeley Lab, commercial product offerings now available claim to have significantly better capabilities than those offered before the Times project. “The future challenge for industry is to replicate the Times Company success in commercial buildings on a routine and cost-effective basis.”

Since then, there have been several other research projects designed to examine how best to implement daylight harvesting in large office spaces. For example, Steven Mesh, LC, IESNA, recently worked on a project designed to test the use of four different control systems for a major global financial company headquarters in New York. Mesh is a principal at Lighting Education & Design, a San Francisco Bay area lighting design company, and a well-known lighting and controls specifier.

Mesh explains that the installation proved to be difficult. He attributes part of the difficulty to the lack of education about new lighting control technology. However, another very substantial reason for the difficulty of the installation was the use of standard cabling that required multiple runs, not all of which were properly color-coded. “Lighting technology has changed extremely rapidly,” said Mesh. “Unfortunately, the technology for getting power and control signals to fixtures has lagged far behind, and is only now catching up to lighting technology.” He adds, “The industry needs to develop cable for installations that require control and power together. From my observation, new products like MC Luminary MultiZone will have a big impact on the demands of changing lighting technology and energy codes.”