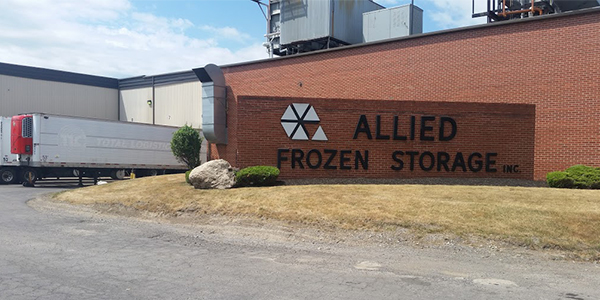 Say what you will about the decline of American home cooking and the family dinner, but the trend toward easy-to-prepare frozen meals has been good news for some companies in a position to take advantage.

And in upstate New York, one of those companies that is reaping the benefits of the social trends is Allied Frozen Storage Inc., a third party warehousing and logistics company that has grown by leaps and bounds in recent years, matching the expansion of the frozen food aisle in your neighborhood supermarket.

The privately owned firm, headquartered in Brockport, N.Y., outside of Rochester, has been busy adding new cold-storage facilities at its existing locations and buying out a former rival, Genesee Valley Cold Storage of Mt. Morris, N.Y., adding nearly one million cubic feet of cold storage space, and 30,000 square feet of dry storage space.

“Over the past 10 years, as more and more families have both parents working, what they’re looking for is convenience,” said Steve Kincanon, the chief operating officer of Allied Frozen Storage. ”And that means more microwaved and frozen foods – you can go into any supermarket and it used to have a couple of coffins, and now there are two or three rows of solid freezer cases.

“The same thing has happened in the storage industry, to supply that growth,” he added. “Everybody’s looking for two-minute meals, when they used to sit down to a fully cooked meal. That doesn’t happen any more, and obviously that’s a good thing for us.”

At the same time, as consumer demand for frozen products has grown, supermarket chains and major food distributors are looking to simplify the supply chain, and for outside help in increasing efficiency.

Allied Frozen Storage recently implemented the S3 WMS Web-based Comprehensive 3rd Party Logistics Software (WMS), which has the capability to collect and distribute real-time data for shipping and receiving while complying with the food industry’s latest requirements. “Our WMS is state-of-the-art,” Kincanon says. “Customers no longer want to see what just happened, they want to see what is happening. And not at the load, or lot, or even pallet level, but at the case level.”

“What’s happened in our business is that it’s easy for a company to get into dry warehousing; it doesn’t take that much capital for a dry warehouse,” Kincanon explained. “But in a frozen facility you cannot imagine the cost. Typically, food manufacturers don’t want to spend that much capital. If they’re going to spend $15-20 million on a building, they want manufacturing – they don’t just want distribution.”

Ironically, Kincanon said that Allied Frozen Storage got into the cold-storage business “almost by mistake.” In the early 1980s, two sets of brothers – Charles Pecorella, Matteo Pecorella, John Petronio and Carl Petronio – who were in the building business under the Allied name were hired by a major local client, the frozen food giant Birdseye, to build a storage facility.

In 1983, they built a second plant in their hometown of Brockport, and were asked if they were interested in operating it as well. That’s when the brothers created Allied Frozen Storage, Inc., as a separate company.

Within a few years, Allied Frozen Storage had an opportunity to move into the Buffalo market, where Tops Markets is its largest client. The company built a 212,000-square-foot storage center in suburban Cheektowaga in 1989, and just one year later it added a second, 101,000-square-foot site.

The company has expanded steadily throughout its history. A major piece of the puzzle was added in 2002, when Allied Frozen Storage acquired the Owens-Illinois complex on Owens Road in Brockport. The company renovated 600,000 square feet of freezer, cooler and dry storage space, and upgraded the rail facilities at the site, allowing for the addition of CSX Corporation rail services, including an inside rail dock and fast turn rail to truck cross dock facility.

As the company grew, so did its client list. Kincanon said that Allied Frozen Storage now has 152 customers, and all of its storage facilities serve multiple clients. Altogether, the firm’s six sites offer some 30 million cubic feet of storage, with about two-thirds of that cold storage.

“We serve all of the Northeast-ern United States and southern Ontario. We go anywhere that the customer wants to go within that business service area,” Kincanon said, explaining the logistical and shipping zone for Allied Frozen Storage extends about an eight-hour drive from its sites. “We are clearly the dominant player in western New York,” he said.

The firm was also aided by its broader affiliation with the Allied Group, an umbrella parent company owned by the four brothers which also included Allied Builders, a general contractor for all types of public, private, industrial, municipal and commercial construction projects, including construction of all Allied Frozen Storage facilities in Buffalo and Brockport, N.Y., and Allied Real Estate, which developed its project sites. Last year, Allied Frozen Storage was purchased by Drew Blum, the former chief financial officer of the company, and by the Allied Frozen Storage, Inc. Employee Stock Ownership Plan. Drew is now President and Chief Executive Officer of the company.

“We have a diversified customer base,” said Kincanon, who described it as a mixture of food manufacturers, wholesales, and retail food chains. The vast majority of its customers are also based in western New York. Today, Allied Frozen Storage maintains a payroll of roughly 90 people, which includes a small executive management group of seven people in Brockport, with most of the employees warehouse workers. The small executive group enables the company to keep its overhead at a minimum. Besides Blum and Kincanon, other members of the executive group include Terry Collister, Executive Vice President; John Setlock, General Manager Buffalo and Mt. Morris; Jim Mills, Director of Safety and Engineering; David Budnik, Director of Information Technology and Jeff Arcieri, Controller. For distribution, the company maintains a close working relationship with a trucking logistics company, Ruan Transportation, which has offices on site in Brockport.

Kincanon said that a lot of the growth of Allied Frozen Storage has come because other customers are eager to subcontract logistical tasks. The company does a lot of value-added service. “It’s all the way from vendor and manufacturer inventory management to transportation service to repackaging and re-labeling. That’s the one thing that has led to third-party logistics growth — we offer a laundry list of services that a manufacturer or retailer can pick and choose from,” he said.

Allied Frozen Storage has been able to grow and prosper even though the marketplace for cold storage is a highly competitive one, with a number of national companies competing for business. Kincanon said that the New York-based company is able to stay competitive by offering all of the same state-of-the-art services, such as radio-frequency tracking or the best logistical software, while also providing the hometown touch of personal relationships.

“If you’re a dominant regional player in your local market, you have to know your customers,” Kincanon said. “Our business is relationship based with hands-on sales and marketing. We try to stay on top of their needs.”

Indeed, although Allied Frozen Storage sees continued growth in the coming years, that is likely to come in its home region, extending between Albany and Pittsburgh. This is one fast-growing business that has never lost sight of where it comes from.