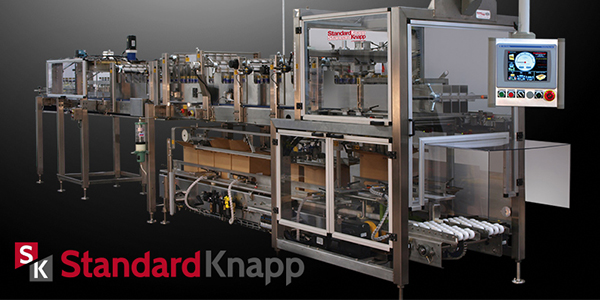 Standard-Knapp can place a container in a box better than anyone else. It has to. After all, customers, particularly those in the food and beverage industries, continually look to it to solve their packaging problems, which are becoming increasingly complex.

Blame the challenges on those brilliant minds in the marketing departments who focus their creative energies on “branding” strategies. “Brand manufacturing companies strive to create unique container shapes, so that consumers don’t even have to look at a label to recognize a product,” says Kris Kolstad, Standard-Knapp’s vice president of sales and marketing. “However, this is done without feedback from production and engineering; that is, the people who have to produce and then package the container.”

Unique container shapes result in unique packaging dilemmas – and Standard-Knapp thrives on those challenges. “We look at it as a great opportunity,” comments Kolstad.
That attitude is what helped Standard-Knapp emerge as a leading producer and seller of advanced end-of-the-line packaging machinery and integrated packaging systems. But the Portland, Conn.-headquartered company was innovative right from its inception more than 100 years ago. “We have been in business since 1894, when our founder, Fred H. Knapp, took out patents on some of the very first semi-automatic case packers,” informs Kolstad.
Throughout the years, the company has followed Knapp’s lead by continuing to pioneer the field of automatic packaging equipment. Its product range includes tray packer/tray loading machines, case packers, shrink wrappers, bottle packers, laners, pad or combination systems designed to address any packaging requirements. Its machinery effectively and efficiently packages containers made of glass, steel, plastic (PET and HDPE), aluminum and fiberboard.

Besides clients in the food and beverage industry, Standard-Knapp serves businesses in the household goods, pharmaceuticals, chemicals, oil, and personal care industries. “We primarily serve companies that have rigid containers as opposed to those that have flexible packaging,” says Kolstad. “For instance, beverage customers include Nestle Waters,, Pepsi, and many large North American breweries such as Anheuser-Busch.”

For Heaven Hill’s Sake
It also serves companies in the wine and spirits industry, including Heaven Hills Distilleries, Inc., a Kentucky-based company whose packaging problems provide a textbook example of how Standard-Knapp helps customers overcome significant challenges. Heaven Hills created distinctive, oval-shaped bottles for its Burnett’s gin and vodka brands. While the bottle attracted customers’ eyes, its shape posed operational problems, as it created delays in the 25-year-old packaging line. The rounded ends and tapered sides created an overlapping, or “shingling,” as the bottles accumulated on the conveyor system. Backpressure force from the shingling created a wedge effect that created jams. Operators were forced to stand on top of the packing system to push bottles through the conveyor – a crude an inefficient solution.

Heaven Hills needed to solve the problem without sacrificing its bottle design, and the only way this could be accomplished was by installing a new system. The company chose Standard-Knapp’s Versatron 939s APT (active product transfer) case packer, a system especially designed to handle non-round and unconventionally shaped containers. Its design incorporates the “power grid” APT to consistently provide high efficiencies, gentle handling and extremely low maintenance operation. The system pulls products into a packing area, rather than pushing them with upstream bottle pressure, which eliminates line pressure. In addition, the system features high-speed, integrated servo laning that causes almost no side friction and provides strong mounting to prevent deflection. The low-pressure, low-friction infeed automatically prevents bottles from shingling.

The Versatron system can reach speeds of up to 40 cases a minute, which substantially increased the output of Heaven Hill’s packaging line. The old system could only handle 15 to 17 cases a minute. Further, it enables rapid brand changeover. Moreover, the system is user friendly and easy to maintain. Standard-Knapp even helped with installation.

New Innovations
As far as newer products, Standard-Knapp offers its Zero-Gap Infeed Technology for balanced, jam-resistant packing lanes. Designed for applications in the soft drink, beer, wine, food, and household product industries, Zero-Gap is a more precise, efficient and low-maintenance alternative to conventional laning systems. It increases efficiency to 98 percent or more and operates at speeds from 100 to 1,600 bottles per minute, and it can be programmed to handle round containers of all sizes. Unlike conventional infeed designs, Zero-Gap does not require costly compressed air or damaging mechanical oscillation to guide containers to their lanes.

“One of our most important areas of innovation involves the infeed for round shapes,” says Kolstad. “Traditional round shapes, such as a bottle of beer or a can of Arizona Iced Tea, have challenges associated with the new kinds of labels coming out, such as the fancy press-on labels. They can’t be ripped, nicked or damaged in any way, as it would destroy the integrity of the design. These considerations put a tremendous demand on the infeed system that takes containers in mass and puts them into four or six lanes, sometimes at speeds of a thousand containers a minute. The Zero-Gap Infeed was developed for that kind of application.”

As Kolstad indicates, Zero-Gap handles round containers at high rates and with stringent requirements regarding label sensitivity, bottle shape and high-aspect ratio (i.e., a tall container with a narrow base), taking them in mass and placing them in lanes without using moving parts and with minimal line pressure.

Another recent innovation is the Servo Laner. Powered by a servo drive and timing belt, it can handle the most problematic non-round containers. It is designed to distribute containers from a single-file lane into multiple lanes, but it can also redistribute two lanes into three or more if required. “For non-round containers, you can’t get away with no moving parts, and you need something that will very actively and gently take containers from single file and into more lanes,” says Kolstad. “Our new laning technology can be positioned either upstream of our equipment or integrated right in with our packers.”

Filling the Club Stores
Another trend that has driven company innovation is the emergence of the “club stores,” such as Sam’s and Costco, who fill their shelves with the multi-packs in shrink film and the hi-cone, overwrap and contours packs.

“The concept of these stores is to provide consumers something that is not offered anywhere else, as far as the number of ounces or the numbers of bottles per case. A lot of what they sell, at the point of retail, is a four-, six-, eight- or 12-pack,” says Kolstad. “In turn, this drives the product manufacturers to have greater flexibility and seamless changeover on their packaging lines. They’re going from size-to-size and pack-pattern to pack-pattern, day-in and day-out, and week-in and week-out.”

As such, Standard-Knapp offers these manufacturers case packers and tray former/loaders with a robust design that can accomplish the fastest changeovers available in the industry.

On a Mission
Now a completely employee-owned enterprise, Standard-Knapp sells its technology in the United States, Canada, Mexico, Latin America and the Far East. It maintains sales representatives throughout the country and around the world.

Its development programs are designed to continually find faster and easier ways to meet the demands of the packaging industry. “Our ultimate goal is to produce the most reliable machine available for the market segments we serve,” says Kolstad.

It accomplishes the mission quite well. Just ask the Heaven Hills operators who’ve been able to come down from atop their old packaging system and move on to the more strategic tasks within their plant.