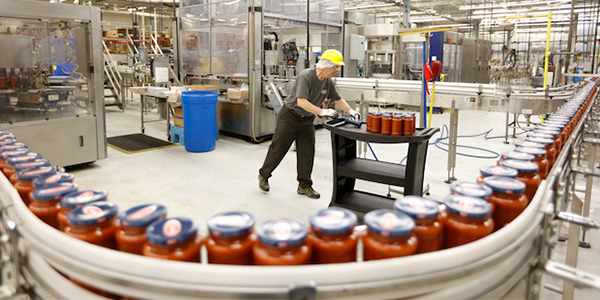 John LiDestri is not a celebrity, but the upstate New York business executive can claim a very close relationship with some well-known household names -– including Paul Newman and Francesco Rinaldi. It’s all part of an illustrious family history that traces its roots back to a famous spaghetti sauce: Ragu.

In fact, LiDestri got his start in the business working on the Ragu sauce product line as a teenager. Operating his own food processing company for a number of years, he recently changed the name from Cantisano Foods, Inc. to LiDestri Foods, Inc., reflecting his 2002 buyout of the remaining shares owned by relatives of another industry legend, Ralph Cantisano.

In recent years, LiDestri Foods, which is based in Fairport, N.Y., a suburb of Rochester, is growing in a number of directions – contract packing for Frito-Lay and other well-known food companies, private-label brands, and even packing raisins for Dole at a California plant. But John LiDestri’s heart is still with his first love: pasta sauce.

“The Francesco Rinaldi brand has been a labor of love, if you will,” said LiDestri, who has watched with satisfaction as his upstart brand has been able to garner a larger share of a market dominated by Ragu and Prego, initially in the New York area, and now in large markets across the country.

Starting out door-to-door
The complicated family tree that leads to LiDestri Foods started in 1937 on the streets of Rochester, where Ralph Cantisano and his relatives started selling their homemade Ragu brand door-to-door. Cantisano built up the business in upstate New York for more than three decades, until 1970 when he sold the firm to Chesebrough-Pond USA Co., which in turn is now owned by the British multinational, Unilever.

But LiDestri, who first went to work at Ragu when he was a student in the 10th grade as a bottle washer and was a Ragu executive at the time, was destined to remain with the Cantisanos. Ralph Cantisano has stayed with Ragu for five more years and was just launching a golf-laden, semi-retirement when some ex-Ragu employees convinced him to enter the cheese business.

“It was a weak moment kind of thing,” laughs LiDestri, who said the cheese business turned out to be something of a disaster, squeezed by rising milk prices and other economic hardships. But by the end of the 1970s, Cantisano’s no-compete clause against Ragu had expired, when the opportunity arose for his new company to package a small brand called Francesco Rinaldi. By then, he had also lured LiDestri to work as his general manager.

“We didn’t know a lot about cheese, so we said, ‘Why don’t we do something where we know what to do?” LiDestri recalled. The firm started packing Francesco Rinaldi in 1980 and bought out the line a couple of years later, with mostly local distribution. “It wasn’t a bet-the-farm-kind-of-thing,” said LiDestri.

In 1983, the upstart Cantisano Foods teamed up with Paul Newman, producing Newman’s Own pasta sauce and then, a few years later, his salsa line. It moved to a facility that was just a half a mile from Ragu – but by the mid-1990s each went their separate ways. Unilever took much of the Ragu operation to Kentucky, while Cantisano Foods moved into a large new plant in suburban Fairport. The new facility helped the growing company to branch out into production of more private-label sauce brands for supermarkets like Stop ‘n Shop and Wegman’s, as well as contract packing for national food companies.

“With all of our experience at Ragu, we knew a lot about running a high-speed production line,” LiDestri said. With an oversized 300,000-square foot plant that was originally built for American Can, the company landed its first two contracts with industry heavyweights Nestle and Frito-Lay. Since then, LiDestri has spent $20 million on upgrading the plant and further expanding its capacity.

Growth in contract packing
Meanwhile, the Francesco Rinaldi brand, which is roughly 20-25 percent of the company’s business, continued to grow despite the tough competition. “It was a struggle, because Ragu was such a household name – it was almost generic, like Kleenex,” LiDestri said. But Francesco Rinaldi now has a healthy 14 percent share in the large New York City metro market, and is widely available along the Eastern Seaboard from Boston to Washington, D.C. It’s also now widely available in California, and has established a beachhead in Chicago as well.

Even so, contract packing has been the greatest growth area for LiDestri Foods. “We don’t advertise at all,” LiDestri said. “People come to us because of our reputation in the industry.” In addition to Nestle and Frito-Lay, the company now does contract work for ConAgra, Heinz, Barilla, and others.

“A lot of larger companies are finding that bricks and mortar are not what they want to own,” said LiDestri. By contracting for so many different companies, LiDestri is able to keep at least one of its production lines operating 24 hours a day, seven days a week – a huge, cost-effective boost to the company’s productivity.

The growth of the company has been dramatic since moving to the Fairport plant – from $69 million in annual revenues in 1994 to close to $200 million today. Employment has increased as well, with close to 400 people working in upstate New York – making it one of the Rochester area’s larger employers – and another 135 at its two facilities in Fresno, Calif., which process tomatoes in addition to the contract work carried out for Dole. Just this year, the firm has been adding a third production line at the New York facility, which should further increase capacity by about 25 percent.

Ralph Cantisano retired from the company in 1998, and in September 2002 LiDestri purchased the outstanding shares of the privately held company from his two daughters. He officially changed the name of the firm to LiDestri Foods – the Cantisano family had requested such a change – earlier this year.

“I think our strategy will continue to be to not try and make ourselves exclusive to any one of these categories,” said LiDestri, predicting across-the-board growth for contract packing and private label brands as well as Francesco Rinaldi. “The food we prepare serves over one million consumers a day, and we take the task of pleasing each and every one of them seriously.”