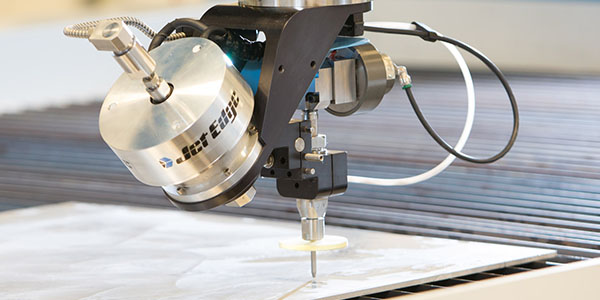 Jet Edge began development of ultra-high pressure (UHP) waterjet technology in 1984 as part of the Possis Corporation. Convinced that he could improve upon the nascent technology, owner Chris Possis entered the waterjet market with two product lines: a 36,000-psi mobile line and a 55,000-psi precision cutting line. Jet Edge was incorporated as a separate company in 1986 with Possis as president.

One of the first customers for Jet Edge’s waterjet precision cutting machines was the oil refinery/petro-chemical industry. Oil companies were attracted to the technology because of its ability to cut through metal without producing heat. For obvious reasons, when it came to cutting access holes in used oil tanks, the oil industry opted for waterjet machines instead of other heat producing methods.

The chemical and hydrodemolition industries were the first two customers for Jet Edge’s 36,000-psi mobile cleaning line. The company’s machines were used for cleaning heat exchangers in chemical plants and for removing concrete from concrete structures. Jet Edge powered systems also were used to help restructure a number of damaged bridges in Kobe, Japan, after a tragic earthquake destroyed much of the city’s infrastructure.

Jet Edge captured a large part of the waterjet market during the late 1980s and early 1990s because of the power and reliability of its equipment. During Jet Edge’s early years, only a couple of competitors could match the psi levels reached by the company’s waterjet systems. In addition, competitors weren’t able to replicate the long life of Jet Edge systems.

The Jet Edge name also gained prominence during and after the Persian Gulf War. After retreating Iraqi troops deliberately set fire to Kuwaiti oil fields, Coalition forces used Jet Edge waterjets to cut off the oil well units without heat and dramatically reduced the cutting time of up to 10 days to less than two hours. At the time, Jet Edge was the manufacturer of the only waterjet cutting system that could work in Kuwait because the company’s machines were the only ones equipped with its patented pre-aligned cutting head. The other waterjet systems available at the time relied on the operator to align – by sight alone – the system’s cutting head with the area being cut. In Kuwait, operators didn’t have the time to tweak the cutting head by eye. Jet Edge’s patented pre-aligned cutting head made it easier for the operator to replace the machine’s nozzle and get the machine back to its original location for continued cutting. After the war, Jet Edge shipped many of its new patented cutting heads to a growing list of customers and not one was ever returned. With the new cutting head, waterjet technology went from a niche cutting system to one on par with other more conventional cutting systems.

Abrasive waterjet cutting offers many advantages not found in other cutting techniques: no heat affected zone; low contact force of cutting stream; no distortion and warping of materials; burr-free edges, which produces a cleaner cut; the only cutting technique that can cut materials of any thickness; near net shaping that eliminates secondary operations; high accuracy cuts of up to +/-0.001; small kerf width that allows for tight nesting and optimal material usage.

Garnet is the abrasive of choice today for use in abrasivejet cutting. Unlike its competitors, Jet Edge offers an abrasive recycling system. With the system customers can re-use up to 70 percent of the garnet abrasive after each use. Since the abrasive substance represents the highest cost associated with using abrasive waterjet for cutting, the recycling system gives Jet Edge an enormous advantage over competitors. “We have 50 customers using our abrasive recycling technology and not a single customer has ever sent back the product,” notes David Dumas, sales manager for Jet Edge’s cutting division.

According to Dumas, other competitors have tried to develop their own recycling technology but have been unable to do so because they haven’t mastered the design and engineering barriers. Whether customers are looking for a portable system or an industrial installation, Jet Edge operates at pressures ranging from 36,000 psi to 55,000 psi. Jet Edge’s motion control systems can accommodate table sizes from 30 inches by 30 inches to 14 feet by 50 feet.

Jet Edge motion systems are manufactured according to American Machine Tool standards. The motion system tolerance capabilities are verified through dynamic analysis using a Renishaw™ ballbar system. The analysis assures customer satisfaction by delivering tight and consistent part cutting tolerances. These versatile systems can grow with a business, by extending the cross beam or side rails and by adding multiple cutting heads, the work envelope can be increased along with productivity.

Since the mid 1990s, Jet Edge has been developing ever more advanced waterjet motion controllers. Most recently, Jet Edge developed the AquaVision® controller, the most advanced waterjet motion controller in the industry. From the customized Visual Basic front end, the user is guided through the process from job set-up to production. Single parts, part arrays, mirroring, scaling, rotation and plate alignment are a click away. AquaVision is fully networkable, allowing part programs to be generated offline and easily transferred to the system’s hard drive for production.

Jet Edge systems are being used by many of the world’s leading airlines, automotive, industrial and aerospace manufacturing companies. “Industrial giants such as Boeing, GE, and 3M rely on our machines,” says Dumas. “We also supply a lot of job shops and metal service centers.”

Jet Edge offers turnkey systems for standard and custom-designed precision cutting, surface preparation, coating removal, industrial cleaning and hydrodemolition applications. “Increasingly, customers are looking for complete turnkey solutions,” notes Dumas. “They don’t want to go to separate suppliers for each waterjet component, instead they want one supplier to meet their waterjet needs.” Jet Edge custom-designed products are another reason customers select the waterjet company. The company’s engineering department has specially designed the following for customers: a Jet Edge system with an inkjet machine mounted on the cutting equipment for simultaneous cutting and identification marking; a cutting machine featuring a nozzle that adjusts automatically, and a cutting machine that included a drilling tool as part of the system. “By having the ability to attach tools to our motion systems, we can design multifunctional waterjet systems,” explains Dumas. Jet Edge is renowned for its level of customer support. “Customers can call 1-800-jetedge and get service seven days a week,” says Dumas.

During the spring of 2001, Jet Edge unveiled the first 55,000-psi field pump for coating removal/surface preparation applications. UHP waterblasting is gaining worldwide acceptance over traditional methods due to today’s changing environmental standards. This includes the removal of tough coatings from structures such as bridges, water towers, storage tanks, and ships – from tugboats to oil tankers. Waterblasting applications range from non-skid coatings on aircraft carriers to the removal of traffic lines and rubber on roads and runways. UHP waterblasting also eliminates secondary operations, in many instances waterblasting and painting contractors can work simultaneously on the same project.

World Class Facilities
Jet Edge employs about 60 people who make up the service, production, engineering, marketing and sales departments. In order to accommodate growing market demand and the plant equipment of Chukar, a CNC machine manufacturer Jet Edge acquired in the fall of 1998, the company moved into a new 100,000-square-foot facility in 1999.

The building is divided into a 30,000-square-foot office area and 70,000-square-foot manufacturing area. Jet Edge offers state-of-the-art labs as well as product display and training rooms. Jet Edge is located in St. Michael, Minn., about 30 miles from downtown Minneapolis.

Industry Trends
The waterjet industry is moving in the direction of higher pressures and more accurate and reliable machines. As expected, Jet Edge has responded to these developments in a timely and appropriate manner. “In our R&D lab we’ve developed a pump that can run at 80,000 psi,” says Dumas. “We run the pump on a 24/7 basis. We study the performance of the pump and whatever we learn from it we integrate it into our 55,000-psi machines to improve their performance and reliability. We’re very focused on making longer life components.”

As the waterjet industry has moved toward more accurate machines so has Jet Edge. “We have the most accurate XY motion machines in the industry,” says Dumas. “They are servo-driven and controlled by a PC Windows NT controller.” “The new designs we will be introducing in the future will also make our machines even easier to use and maintain,” explains Dumas. “The pumps we currently make are already the easiest to use and maintain in the industry.” Adds Dumas, “Because of the speed and versatility associated with waterjet systems we see no limit to the number of applications as more and more people discover waterjet technology.”