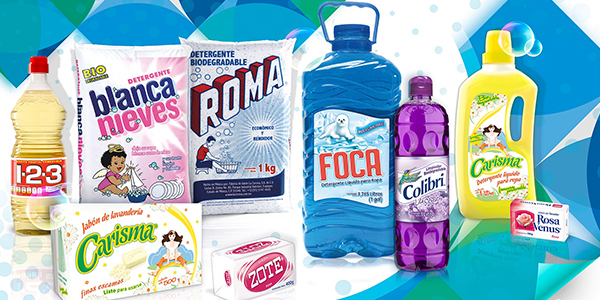 Fábrica de Jabón La Corona currently occupies a successful and premier market position. While that position is well earned, the efforts to reach that pinnacle of success are not readily knowledgeable. The firm began its operations in 1920, using the most rudimentary rental facilities. The road to success was often one of difficult challenges. With extraordinary efforts, the company struggled and succeeded against those severe economic limitations in every respect. The enthusiasm and dedication of the employees solidified the company’s development and growth plan. “In the first years, the company struggled against severe economic limitations in every aspect. Only the employees’ enthusiasm and dedication solidified the company’s development and growth plan, and it’s still the driving force of our business,” said Gunnar Hallgrimsson, director of export sales.

Since, La Corona has maintained a valuable partnership with its employees and both have benefited. In 1925, La Corona acquired land to develop its own physical facility at Coalcoman. With the continuation of sustained success, La Corona wisely invested in another facility in Xalostoc. As the need arose, La Corona vigorously responded with new space acquisitions until reaching the current 3,982,647 square feet. In addition, the needs of parts replacements and updating were met. By so doing, La Corona demonstrated its resoluteness in its goal of world-class performance.

The first to be produced at La Corona was laundry soap. Later, in response to a large market demand, the manufacture of bath soap began. This was followed by the establishment of facilities for the production of glycerin processing, detergent and toothpaste. The cooking oil market presented a unique opportunity for a quality product and La Corona responded favorably.

The newest acquisition, a liquid cleaner plant and a fabric softener plant, adds yet another dimension in La Corona’s reach to the consumer’s home. The motivation for success and the enthusiasm has allowed the company’s directors to continually improve product offerings. This has helped position La Corona very favorably in the export market.

EFFORT PAYS OFF
Since the beginning, the company philosophy targeted the low-income market segments, through its own distribution network and small retailers. Its business plan has proven to be effective all around. The company makes products at sensible prices for the consumer, offers a good profit margin to retailers, and is committed to quality. Moreover, the company does not spend a cent in advertising, and relies exclusively on word-of-mouth publicity. According to the Chamber of Detergents and Oils of Mexico, La Corona now shares the first position in the marketplace.

“We started shipping one truck a month to the United States, and now we send between 25 and 50 trucks daily,” said Hallgrimsson. With that average, La Corona had to ascribe to The Business Anti-Smuggling Coalition, also known as BASC, a business-led American organization that works in alliance with the United States Customs to combat narcotics traffic via commercial trade. The program is voluntary for businesses, which participate by setting up manufacturing and shipping standards to decrease the risk of product vulnerability to the narcotics trade. In La Corona’s case, importing powder detergents was especially attractive to potential smugglers.

In order to respond to turn around time and customer satisfaction, La Corona complies with the BASC program, which scrutinizes the entire manufacturing process, packing and shipping practices, and offers guidelines to reduce the possibility of being potentially used as unintentional drug importers. In that way, the company reduced border line crossing time and paperwork, which was essential for the smooth operation of their exports. The company also has earned C-TPAT status, a very important U.S. Customs and Border Protection law.

“We currently sell to several states in the United States with large Mexican immigration such as California, Arizona, New Mexico, Texas, and Illinois, but also to the new states where Mexican immigrants are just getting established, such as Georgia and the Carolinas,” said Hallgrimsson. A simple idea guides the marketing plan: the company follows the settlement patterns of Hispanic immigrants. In addition, the success of La Corona soaps, detergents and oils abroad is based on previous knowledge of the products. “Zote is a brand name in Mexico. If you ask for soap, you simply ask for a “zote,” he added.

Presently, the company distributes through its own network, retailers, chain department stores, big and small supermarkets, wholesalers, and cash-and-carry operations. For industrial use, the company sells to laundries and cleaners. In the Caribbean, the marketing strategy follows the customers’ requests. “They usually call because they’ve seen our products in Miami. We then check their information and set up a working strategy,” added Hallgrimsson. In the Caribbean, La Corona sells to customers in Aruba, Bahamas, Barbados, Haiti, Jamaica, Puerto Rico, Dominican Republic, St. Kitts, St. Martin, St. Thomas, St. Vincent, Trinidad, Dominica, and Grenada.

According to Gunnar, the procedure in South and Central America is similar to the one in the Caribbean. “The fact that some countries have commerce treaties with Mexico facilitates our task of finding new distributors. Our strategy is to keep growing in those countries,” he added. In South America, La Corona products can be found in Ecuador, Venezuela, Bolivia, Guyana and Surinam, and in Central America, in Guatemala, Belize, and Costa Rica.

In the last five years and because of the entire team under Hallgrimsson’s management,, the company has reached commercial agreements with Chile and Guatemala, has two new distributors in Panama and Ecuador, and new managers in El Salvador, Honduras, and Jamaica, to which the company has been selling for more than 12 years. In Canada, the expansion has been trusted to one distributor who is knowledgeable, and geared to follow the Hispanic market. Serving that broad network of customers is a challenge that the company has solved by hiring third party logistics providers, who accommodate its products in their regional warehouses and distribute through their transportation services. “To restock from the plant would take 10 days, while some of our clients need next-day or even same day delivery,” he said.

The logistic providers made Internet tools available that allowed the company to see how the product was moving and how much inventory was left, who and when was picking product up, and even print bills of landing. “The Internet-based system is part of our daily management, and we plan to continue with it for at least a few years,” said Hallgrimsson. Outsourcing has allowed the company to pace the opening of its own warehouses.

DEVELOPING A LINE OF PRODUCTS
Since La Corona started at its own facility with the manufacture of laundry detergent, a popular line of products has been developed to respond to a large market demand; these include Foca, Roma, and Blanca Nieves. Foca is a biodegradable laundry detergent that contains active enzymes and optical brighteners while Roma and Blanca Nieves are biodegradable general household detergents for heavy-duty laundry and general use.

Zote is the most popular laundry soap in Mexico for delicate washing such as baby’s garments, hosiery, sweaters, and to pre-wash shirt necks and cuffs. As for personal use, Venus, Rosa Venus and Coral are moisturizer skin soaps with added coconut oil, tallow, and an antibacterial agent. “The laundry detergent market is pretty stable and we have dominated it for a long time with five leading products, although the liquid form is taken longer to get established. Regarding skin care soaps, that is a more competitive market,” said Hallgrimsson. The technology used to manufacture these products is mainly American, Italian and German and Canadian, and the good habit of ongoing reinvestment has kept the facilities in prime condition. “We recently acquired extruders to manufacture our own PET containers,” he added. La Corona also produces cooking vegetable oil 1-2-3, and 100percent corn oil Monarca. The U.S., Canada and Argentina are the main suppliers of raw materials for the cooking oil.

The newest acquisition, a liquid cleaner plant and a fabric softener plant, adds another dimension in La Corona’s reach to the consumer, by launching an antibacterial liquid cleaner for kitchens, bathrooms and floors, and a general use softener. To complete the line of home products, toothpaste with refreshing mint taste has been added. The company delivers half trucks and full trucks to orders anywhere in the United States, or offers convenient pick-up locations in Dallas, Los Angeles, Atlanta, and Chicago for less than half truck orders. To reach other countries, maritime transportation is available carrying 20- and 40-foot containers. The company guarantees that more than 85 percent of deliveries meet their appointments on time.

WHEN A GOOD NAME IS ENOUGH
La Corona is known for its policy of abstaining from advertising. The policy is based on the conviction that money is better spent in product and service improvement, in new technologies, or in making every effort possible to achieve customer satisfaction. In the same way, La Corona does not promote its products with discounts, coupons or other marketing tools. The company believes that it charges the best price possible to its retailers so they can have a substantial profit margin, which still allows the final customer to acquire the product at a sensible cost. For the same reason, its does not pay slotting or give allowances.

Grunnan concluded, “We think a profitable business relationship should be based on confidence and mutual commitment for shared benefit.”