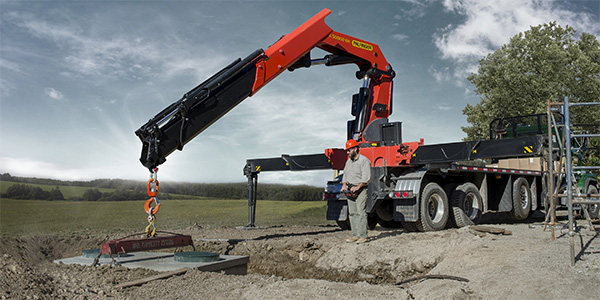 “Biggest” and “best” are adjectives that most companies use in abundance when they talk about themselves, but when you look at the expansive product line offered by Omaha Standard, Council Bluffs, Iowa, you’ll find very little exaggeration. As Tim Craft, the company’s vice president of sales and marketing, puts it, “We offer the widest selection of truck bodies and conversion hoists.”That product line includes everything from platforms and take bodies to grain and dump bodies, service and utility bodies, line bodies, hoists, toolboxes and lift gates. “Our regional warehouses and network of truck equipment distributors ensures prompt delivery,” Craft continues, “and we can custom-build to the exact specifications of our customers.”

Originally known as Omaha Body, the company was incorporated in 1924 after the merger of Omaha Manufacturing Company, Omaha, Neb., and Standard Box Company of Council Bluffs. The old Omaha Manufacturing Company made a variety of products, including airplane propellers, cabs for model T trucks, spark plugs and even airplanes. Standard Box was a wagon box manufacturer.
From 1924 until the early 1960s, the Omaha Body Company made a variety of products for the trucking industry, with heavy emphasis on grain and livestock bodies and trailers for the agricultural market. They also made red center dump gravel bodies, bulk cement trailers, delivery vans, moving vans, tank trailers, stake bodies, dump bodies, van trailers, reefer bodies, livestock pup trailers, pickup racks, flatbed trailers and more.

The company also acted as a local distributor and installer of other lines of truck equipment. For example, Omaha Body became a Heil distributor in 1933 and its distributorship in Council Bluffs – Omaha Standard Truck Equipment Co. – continues to sell many Heil products to this day.

Outside the Omaha/Council Bluffs trade area, the company marketed its products primarily through factory branches. By the late 1950s it had 17 branches located in such places as St. Louis; Denver; Kansas City; Wichita, Kan.; Sioux City, Iowa; Chicago; and Billings, Mont.

“Throughout the 1960s, farm bodies were our primary product offering,” Craft relates. “The first substantial move toward increasing our product offering took place in 1971 when we came out with a line of conversion hoists. Initially there were only four models of scissor hoists. Our hoist program has been very successful and has grown substantially; we now offer 30 models of scissor, subframe and stabilized telescopic hoists.

“We continued to concentrate on the farm market in the 1970s, further expanded our distributor network and invested in new equipment and additions to our plant,” Craft continues. “We also added such new products as medium-duty platforms, additional scissor hoists, stakeless grain bodies, aluminum grain bodies and Olympic series hoists.”

The agricultural recession of the early 1980s forced the company to rethink itself, and to ultimately modify its marketing strategy. “Our efforts were redirected toward the commercial truck body business and into geographical markets where we had not previously had a substantial presence,” Craft explains. “We put more emphasis on our stake bodies, making such improvements as spring-loaded rack connectors and rack hold-downs, and we spruced up our platforms with recessed lights and I.D. lights built into the outrail. The all-structural-steel Super Duty platforms were also added to our line.”

Also in the early 1980s, the company introduced several models of drop-hinge, low-profile scissor hoists to help ease chassis installation problems. And by 1980 it was also making all of its own hydraulic cylinders for the hoists.

In the spring of 1986, a new line of 2- to 3-yard Eagle and Super Eagle dump bodies was introduced. “Other products have also been added to the growing Omaha Standard line over the past few years, such as the Badger bodies and a line of subframe conversion hoists,” Craft points out.

In late 1986, Omaha Standard also formed a new division for the production and sale of Eagle Lift liftgates. These gates have substantial value-added features “that have been tremendously successful for us. We added the ‘Railoader’ liftgate in 1988,” says Craft.

“In keeping with our philosophy of offering distributors the broadest range of products, we made a decision about 12 years ago to get into the service body business,” he explains. “Given our distributor network and our other products, we felt like service bodies and related products were a natural. Sales and distributor acceptance have far exceeded our expectations.”
And in 1993, Omaha Standard established a fleet sales division called OS Fleet Sales as a means of better serving the fleet/leasing business. The division currently distributes Omaha Standard products and other lines of truck equipment to national fleets and leasing companies.

Overall, the company has a network of approximately 200 distributors in the United States and Canada. It also has some 400 active Eagle Lift distributors located in such places as Canada, Guam, Israel, Italy, Mexico and Puerto Rico.

And Omaha Standard is continually improving and upgrading these facilities to stay on the cutting edge of the truck equipment manufacturing business. The west plant, for example, recently underwent platform and paint line expansion, including a 30-foot extension of the west side of the plant. It also has a new wastewater treatment plant and addition expansion, and is prepping for ISO 9000 accreditation.

The south plant, meanwhile, is seeing improvements in plant layout, material handling, storage and finishing capabilities for better through-put and increased capacity. And the east plant is adding a fourth assembly line for line and custom bodies.

Perhaps most unique in this age of corporate mergers and acquisitions, Omaha Standard continues to enjoy solid success as a family business, just as it has been for the last 38 years. And as always, its aim “is to give our customers the highest quality products with the least amount of hassle,”
Craft concludes.