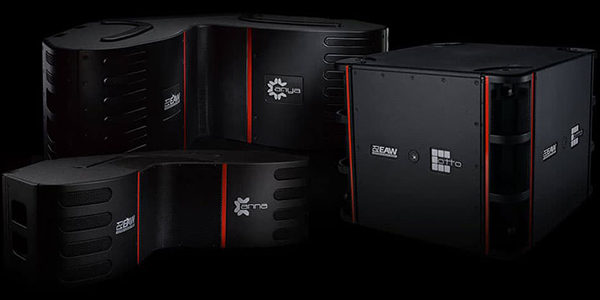 When Eric Clapton goes on tour, his crew of professional sound technicians have a single-minded goal – to make sure that the concert sounds as good in row one as it does in row 150. This is no small challenge, considering the intricacies of Clapton’s music and the size of the venues needed to accommodate his fans. For his last tour, Clapton’s team faced this challenge with a loudspeaker system designed and built by the professionals at Eastern Acoustics Works (EAW), who care as much about their craft as Clapton does about his legendary guitar solos and soothing, dulcet tones.

EAW has become a technological and market leader in the design and manufacture of high-performance professional loudspeaker systems because the company’s engineers and designers are in love with what they do. “This is more than just a job for us, it’s our passion,” said EAW’s spokesman Kyle Ritland. “It really is a labor or love – something that many of us do even outside of work.”

What makes such work so special for these professionals? “Mainly, it’s a passion for music, and being involved in something we love,” said Ritland. “We are building the stuff that our heroes go on tour with. It’s as close as you can get to being a rock star without actually being on stage. There are a lot of musicians in this industry.”

It’s not just Clapton who trusts the expertise of EAW on the road. Just this year, EAW speakers have been selected for the Nelly tour, as well as the recent Paul McCartney concert in Russia’s Red Square. Even Pearl Jam launched the U.S. leg of its 2003 world tour with a brand new EAW KF760 line array, supplied by Seattle-based Carlson Audio Systems, which was contracted to provide the sound system for all 47 shows.

“We’ve been fans of EAW loudspeakers since we started using them back in 1992,” said Mark Carlson, founder of Carlson Audio. “We loved the sound of their KF760 from the moment we heard it and we knew this system offered both the coverage and sonic quality we needed for our clients. We further confirmed our belief when we demonstrated the system at two Pearl Jam benefit concerts in last December.”

From Devotion and Disney
The concept for EAW was the brainchild of founders Ken Berger and Kenton Forsythe, whose shared interests – a passion for music, a fascination with sound reinforcement and an intense desire to succeed in a marketplace dominated by industry giants – has propelled the Whitinsville, Mass.-based company from a 12-person firm operating out of an old automotive plant in 1978, to an industry powerhouse employing over 400, with revenues reaching $40 million in 2000. Through the years, EAW has managed to assemble one of the most enviable loudspeaker design teams in the world while establishing a state-of-the-art manufacturing and product development operation that is second to none.

In 1999, EAW significantly augmented its technology portfolio with the acquisition of SIA software. SIA develops the professional audio industry’s mostly widely used acoustic analysis and real-time control software. Perhaps the most pivotal point in EAW’s history came at the turn of the century when the company announced plans to join forces with Mackie Designs, Inc., a leading manufacturer of high-quality, professional audio electronics. In April 2000, EAW became an official subsidiary of Mackie – a move that significantly increased the amount of engineering and product development horsepower at EAW’s disposal. Being part of the Mackie family allows EAW to draw upon the resources of other Mackie companies including RCF, an Italian manufacturer of high-end transducers, and Acuma Labs, a Canadian developer of embedded software for professional audio applications.

Since joining forces with Mackie, the EAW product offerings have continued to increase in vitality and strength. Today, you’ll find EAW products virtually any place where high-performance sound is critical, including sports arenas, churches, major concert tours, movie theaters and even Disney rides. EAW also builds one of the most popular and well-touted systems for high-end dance clubs: the Avalon Series.

The Formula for Success
So what is it that has allowed EAW to defy the odds and become such a significant force in an industry that had been dominated for decades by giants like JBL and Electro-Voice? “It really boils down to constant innovation and our ability to customize products for specific applications,” stated EAW co-founder and senior vice president of marketing at Mackie Designs, Ken Berger. “No other manufacturer is able to work as a ‘partner’ with its major customers and deliver a solution that meets their specific needs.”

Berger continued, “We have a number of resources at our disposal that many of our competitors don’t. For example, EAW operates its own custom paint shop that allows us to match any provided paint sample with an almost unlimited variety of custom colors. We can match any environment rather than simply offering ‘black’ or ‘white’ like our competitors. We also operate our own computer controlled wood shop. This facility enables us to create custom enclosures for unique installations, and to customize existing boxes (products) as needed for challenging installations.” The wood shop, he added, “is also key to streamlining the product development process, allowing the engineering team to quickly fabricate prototype enclosures for new products, and modify those enclosures as the product proceeds from concept to production.”

Of course any mechanical resource is only as valuable as the human resources behind it. For this reason, Berger also cites the innovative talents of the EAW engineering and product development teams as one of the factors that have helped the company to achieve and maintain its market-leading position. In fact, EAW can boast more engineers in proportion to all EAW employees than most professional audio companies near its size — nearly 10 percent.

Designing the Future
This year, EAW celebrates its 25th anniversary with the introduction of a new product and technology that some are calling a technological revolution – the Digitally Steered Array (DSA) series. Berger explained how the DSA Series works. “In some venues, like large churches, it can be difficult to project sound to all areas of a crowd without physically moving loudspeakers around and ‘aiming’ sound at certain areas of the room. DSA allows installers to move the sound electronically without actually having to move the speaker cabinet itself.”

The more technical explanation is that each DSA loudspeaker features on-board amplification and DSP (digital signal processing) that is able to optimize that speaker’s “vertical output pattern” to match any given acoustical environment. Adjustments are made via a special software application that runs on any Windows computer. This software, known as DSAPilot, calculates environmental parameters, and then uploads specific settings to achieve the best possible coverage without physically relocating or moving individual speaker cabinets. “DSA offers countless benefits to both system designers, and listeners alike,” noted Berger. “System designers can simply ‘dial in’ their desired output without ever needing to touch or move a heavy loudspeaker cabinet again. It truly is paradigm shift in modern loudspeaker technology.”

After 25 years of success and growth, you might think that the heart and soul of the little 12-person company would have been long since eclipsed by the mergers, acquisitions and technological breakthroughs that have made EAW what it is today. Nothing, however, could be farther from the truth. The passion that gave birth to EAW is as strong today as it ever was. And while its employees may not be rock musicians, EAW’s place in the industry as leaders in loudspeaker design is as highly regarded as the luminaries they make sound so good.