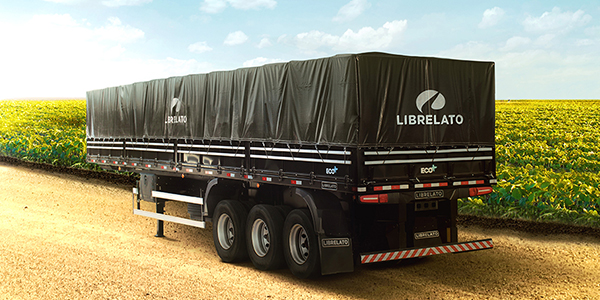 The vast road transport infrastructure in Brazil is essential to industry in the absence of a developed rail network. The country’s businesses depend on roads and place their goods literally in the hands of logistics companies. One of the market leaders in products and accessories for cargo vehicles, Librelato S.A. Implementos Rodoviários, lightens the load.

The success of the new products has been accompanied by considerable investment in infrastructure and a new $17-million plant scheduled to open in 2014.

The Road to Success

Librelato initiated its activities in 1969 in Orleans – a city in the southern Brazilian state of Santa Catarina. At the start, the company sold and repaired wooden trailers and transport vehicles.

Success and expansion led to the manufacture of trailer tools and parts, beginning in 1998. According to Sprícigo, one of the most important moments in the company history came three years later, when it focused on grain trailers – a fast growing sector of the transport industry.

Today, Librelato produces a diversified line of semi-trailers, grain trailers, hydraulic tilt trailers, double trailers, mechanized and transfer trailers as well as lightweight trailers on chassis. Over the course of the company’s history, innovative design and eye for technology revolutionized the market. Librelato introduced the first articulated semi-trailers (in 2000) and the articulated, open-load semitrailer (2007).

“Our main products are tippers and grain brucks which are responsible for 85 percent of total sales,” Sprícigo says.

Originally a family company, Librelato’s capital has counted on the participation of the CRP VII investment fund since 2011, bringing highly professionalized administration and allowing considerable growth.

The company is audited by one of the world’s leading consultancies and prides itself on effective management and transparency. Now one of the biggest road transport equipment companies in Brazil, Librelato has five facilities in Santa Catarina (totaling 102,000 square meters) and more than 2,000 staff.

In 2013 Brazilian industry magazine Exame listed Librelato among the 1,000 biggest companies in the country. It has also won awards for its social responsibility for two consecutive years (2012 and 2013) as well as numerous other prizes and nominations in human resource and performance categories.

São Paulo’s International Transport Industry Trade Fair, Fenetran in October 2013 was the showcase for Liberlato’s latest line of trailers: Horizon. The line brings products of even higher durability, quality and levels of design.

The chassis-based trailers in the range are named JCL after the company’s former president, José Carlos Librelato, who passed away in September 2013. The Horizon line also includes innovative and revolutionary aluminum equipment and light- and heavy- duty cargo accessories.

“The name Horizon was chosen to show that Librelato tests the boundaries of technology and transforms our clients’ needs into real transport solutions,” Sprícigo elaborates. The late José Carlos Librelato himself said: “We don’t develop products only to transport goods. Rather, we develop products designed to solve problems and that is one of our greatest strengths.”

The JCL range, manufactured in Brazil, is designed to carry indivisible loads – transporting large and heavy cargo, whose weight is evenly distributed over the chassis. With a lower center of gravity and higher stability, the equipment reduces impact on the roads and is lower in height, allowing greater accessibility for bridges and viaducts.

Horizon aluminum equipment was tested in Europe and was developed specifically for Brazilian road conditions. Due to reduced mass and weight, the trailers are ideal for high volumes of lighter loads such as grains, sugar, corrosive material, fertilizer and industrial residue.

Librelato also presented a new trailer for collecting and compacting waste. The mechanized sider revolutionizes the management of solid residues. The chassis-mounted technology is complete with funnel for loading, mobile containers on extendable arms, compacting system and storage compartment. Thanks to the equipment the waste collection process can be controlled entirely by the driver through a joystick-operated computer. Four closed circuit cameras allow the driver to see all stages of the process and eliminate the need for additional labor.

Fenetran marked a record month for Librelato and according to Sprícigo sales have risen 15 percent since the launch of the Horizon Line. “Fenetran was an opportunity for us to update the public on our latest innovations and show the quality and strength of our brand to Brazil and Latin America.”

The end of 2013 saw another important development for Librelato. In December the company purchased another facility in Linhares, located in Espírito Santo. The new factory is scheduled to manufacture equipment in the aluminum line as well as covered load, grain and container semi-trailers. The $17-million facility, opening in July has an estimated production capacity of 200 units a month and will generate 300 jobs.

The Brazilian federal government offered support through tax incentives, with the state Governor of Espírito Santo commenting: “It will be an honor to welcome one of Brazil’s most prominent companies.”

Linhares is the most important developing economic and logistics center in Espírito Santo. A large producer of petroleum and gas and focus of investment for several industries, the state was an obvious choice for Librelato’s continued expansion plan.

“As well as focusing on results, our company is concerned with the community. We believe that the new facility will be a great partnership with the state and continue to develop the whole country,” says Sprícigo.

What more does the future hold for Librelato? Already a market leader in Brazil, the company intends to increase exports from 5 to 8 percent. Following the success of the aluminum line, company engineers are focused on constant improvement to creating lighter prototypes that address key issues in road cargo transport: safety, speed and efficiency.

In the midst of expansion and record sales Sprícigo is definitive that the root of tremendous development is its staff. Like its products, Librelato appreciates every detail and nurtures excellence. With numerous awards for social actions and staffing, Librelato proves that people are the heart of its success.