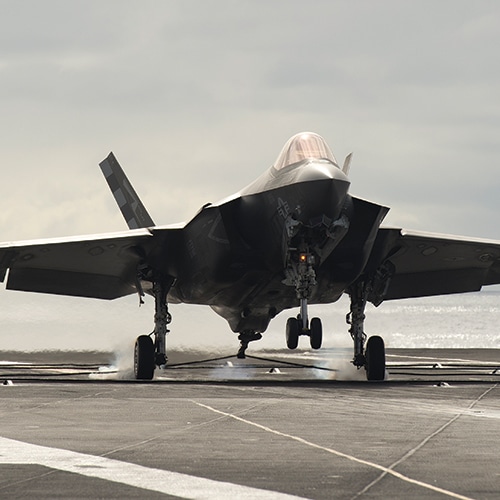 David Soyka reports on a new, cost-effective generation of fighters so advanced pilots who haven’t even been born yet will use it.

The Wright Brothers could never have imagined anything like the single-seat, single-engine F-35 Lightning II fighter–not in their wildest dreams.

Not just because of supersonic cruising speeds of up to 1.2 Mach. or an advanced stealth airframe built with the latest materials to render it virtually invisible to radar detection. But also because of the most integrated and comprehensive sensor package that enables electronic data collection and warfare capabilities that, among other advances, provides pilots with real-time, 360 degree views of their surroundings, views that can be shared among commanders and counterparts in the air, as well as on the land and sea.

In particular, the F-35’s Helmet Mounted Display System displays situational data—such as speed, heading, altitude, targeting information and warnings—on the helmet visor rather than the conventional heads-up display, resulting in faster pilot responsiveness and reduced workload. The helmet also contains a Distributed Aperture System (DAS) that provides real-time streaming sourced from six infrared cameras mounted around the aircraft. This allows in addition to night vision the ability to “look through” the airplane—when pilots look down at the floor, they don’t see the floor, but the airspace beneath them.

In other words, the new breed of fighter jet is arguably as much a result of software as it is hardware.

”The F-16 fighter—the predecessor aircraft the F-35 replaces—had some 2.2 million lines of code,” explains Michael L. Rein, director of F-35 communications for lead contractor Lockheed Martin. “The F-35 has over eight million lines of code. The expected lifespan of this aircraft extends to 2060 in large part because of the ability to update and add to the software to accommodate currently unforeseen situations and requirements. Which means future pilots of this fighter jet haven’t even been born yet. And while there is a trend towards remotely operated aircraft, and we can’t anticipate what will happen 50 years from now, I’m confident whether it is actually in the aircraft or through some kind of drone control, you’ll always need a human being to pilot the aircraft, no matter how sophisticated the software becomes.”

Now, anyone who has ever experienced the “blue screen of death” might wonder about the risks of “buggy” software, particularly software as complicated as this. “There’s a tremendous difference between consumer-grade software, where it’s almost standard practice to release with known issues and develop workouts later, and the software we’re developing where, obviously, there’s no margin for error,” Rein points out. We rigorously test every generation of software to ensure flawless operation. Before any software is installed in the F-35, we thoroughly and rigorously test it first on the Cooperative Avionics Test Bed (CATBird) aircraft, a highly modified Boeing 737 with the same nose as the F-35. The CATBird contains all the F-35’s avionics and sensors systems to allow our engineers to test, monitor and evaluate in-flight performance of the system software. This is in addition to all the comprehensive testing we do in our ground-based laboratories before we even begin in-flight trials.”

“Over the past three years, the F-35 program completed numerous complicated tests and we’ve delivered 20 test and 95 production aircraft that are flying today to verify mission systems and aerodynamic performance,” Rein notes. “In October, we executed the first live fire launch of a guided air-to-air missile over a military test range off the California coast. We’ll be continuing more extensive live fire and targeted weapons testing and we’re on track to meet all our major milestones. This year we’ll be delivering the first production F-35s to the Marine Corps, the Air Force in 2016 and the Navy in 2018.”

Custom Variants
As versatile as the F-35 already is, there are three “variants” outfitted to the needs of the specific service branches. The F-35A is a conventional takeoff and landing variant designed for the Air Force. The Marine F-35B is a short takeoff and vertical landing (STVOL) variant that can hover and land at damaged airstrips, remote locations and a range of air-capable ships. The F-35C Carrier Variant (CV) has a broader wingspan to better enable take-offs and landings from shorter carrier decks, as well as ruggedized structure and more durable coatings designed to withstand shipboard conditions.

In addition, the F-35 program currently has partners with eight countries—Italy, The Netherlands, Turkey, Canada, Australia, Norway and Denmark. “These are all allies of the United States, many of which are also our NATO partners,” Rein notes. “Together, these nations are placing the F-35 in the centerpiece of a global security alliance to combat international terrorism and other emerging threats.”

Production Log
The initial idea for the F-35 dates back to 1997. Lockheed Martin was one of two companies selected to submit plans for what was called a Joint Strike Fighter concept demonstration. The Lockheed-Martin X-35 won the competition, and the first production F-35A (the “Lightning II” designation was later added in homage to two earlier fighter models) rolled out of its Forth Worth, Texas assembly plant in February 2006. While Lockheed Martin builds the airframe, the engine is supplied by Pratt & Whitney. Lockheed Martin also teams with Northrop Grumman and BAE Systems, as well as 14000 suppliers from 46 states and 10 other countries to complete a finished fighter.

“We’ve done of number of different things to make the F-35 production as cost-efficient as possible,” Rein says. To begin with, we had 300,000 cubic feet of concrete floor space that we totally ripped out and replaced with rebar reinforced concrete. The facility dates back to World War II when airframe panels used to be riveted on. To avoid radar detection, stealth aircraft require a seamless airframe, which you can only build with laser technology. The cuts have to be so precise that the flooring beneath this equipment has to be steady as a rock. Hence the need for the new floor.”

He adds, “We also changed our production process. What we used to do when we had three variants of the same model was to run three production lines. We decided instead to reconfigure that into one production line that could produce an A variant, and then a B, then a C, and then go back to A or any other variant.”

The key to this is based flow-to-takt manufacturing, a strategy of moving component assemblies, such as wings and forward fuselages, from one build station to the next in synchronization with parts delivery, task timing and personnel allocation. Lockheed Martin claims that production learning times are much faster than those of other fighters, and that both costs and time to build have been reduced by 50 percent.

In league with achieving this improved efficiency is Electronics Manufacturing and Assembly (EMA). “It’s a better way for us to get parts from suppliers in the most timely and cost-effective manner,” Rein explains. “It takes more than 300,000 individual parts to build on F-35. EMA helps ensure everything we need will not only be on hand when we need it, but the parts from multiple suppliers will fit together seamlessly.”

Another significant change related to the manufacture of tools. Rein points out that, “Typically, tools are built like you would carve a pumpkin to make a Jack-O-Lantern you take out the insides, you cut out whatever part of the pumpkin to make it look the way you want. That’s essentially what you do to a hunk of metal to make the tool you want. The problem is it creates a lot of waste and isn’t particularly efficient. What we do now is essentially like 3D printing. We know what we want the tool to look like, and the tool is fashioned out of metal to that specification. Essentially it’s built from the ground up instead of being chiseled out.”

All of which helps Lockheed Martin achieve cost savings that it claims will by 2019 equal the cost of legacy aircraft. Costs have been going down with each successive lot of aircraft. Currently, the cost of an F-35A is $100 million. By 2020 (the first expected year of full rate production), the cost is projected at $85 million, equivalent to $75 million in 2012 dollars.”

Which is just one way of demonstrating how the F-35 soars above all other fighters while staying below the radar.