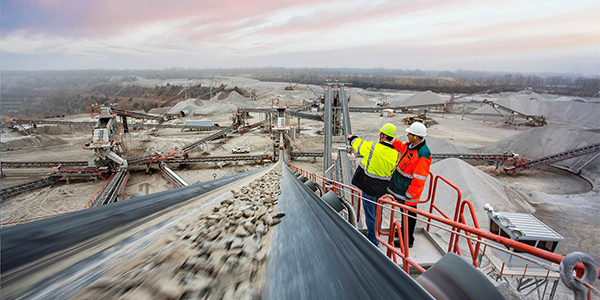 At Metso Minerals Inc., rocks aren’t the only things that get crushed. The company, whose American operations are headquartered in Milwaukee, has pretty much pulverized its competition since 1928, the year it bought the rights to manufacture the legendary Symons cone crusher.

Today, the American landscape is dotted with the impressive results of the firm’s 20th century innovations in rock-crushing and mining equipment – from massive dams to urban skyscrapers to the interstate highways that criss-cross the nation.

As the 21st century began, this industry leader – which thrived in the United States as the well-known Nordberg Manufacturing Co. for more than a century – acquired both a new name, Metso Minerals, and a new owner, the Finnish-based global conglomerate Metso Corp. But the company’s history of invention has continued under a new name, including a revolutionary line of mobile rock screeners and its unique Applications Center in Milwaukee.

“We want to continue being the leader in our industry – and that’s not easy to do,” said John Stolowski, the general manager of marketing for Metso Minerals in America. “That’s why we’re continuing to come up with technological innovations for the customer, so they can make more product at a lower cost.”

Roots in Finland
The irony is that in hooking up with the Helsinki-based Metso in 1989, the company was actually returning to its 19th-century roots. Bruno Nordberg was born on the western coast of Finland in 1857 and earned an engineering degree from the University of Helsinki before joining a wave of immigration to America in 1879 and ending up in Milwaukee in 1880.

Nordberg’s initial interest was in steam and diesel engines, and as a young engineer he patented several major improvements in the steam engine, founding his own company in 1886. Because of the young company’s proximity to the flourishing copper mines of northern Michigan, Nordberg’s firm excelled in developing equipment such as compressors and mine hoists.

Bruno Nordberg died in 1924, but when the company he founded acquired the Symons’ cone crusher business four years later, it cemented its position as the industry leader. This revolutionary piece of crushing equipment soon became standard in ore and industrial mineral operations all over the world, and Stolowski said some Symons crushers built in the 1920s and 1930s are still in operation today. Like many companies, Nordberg went through a series of mergers and acquisitions in the latter 20th century before its name was changed to Metso Minerals in the spring of 2001. Metso Minerals is one of three core businesses of the parent company, which is also a worldwide leader in paper products and automation. Headquartered in Tampere, Finland, Metso Minerals has operations and sales in more than 150 countries, and roughly 50 manufacturing sites.

Just a few months after changing its name to Metso Minerals, the company completed a huge merger in buying one of its leading competitors, Sweden-based Svedala. Officials said the product lines of the two firms matched up well, allowing Metso Minerals to offer a full complement of product lines from drilling and crushing equipment to more sophisticated mineral processing systems. “Uniting Svedala and Nordberg equipment in a process brings customers the best elements into their own minerals processing, “Stolowski said, “When you combine the equipment and application expertise of our people in any Metso Minerals area you find excellence.”

Tops in recycling
Currently, Metso Minerals offers a wide array of complementary product lines under several different names. One of its most high-profile products is still marketed under the Nordberg name – the Nordberg ST171, which is a mobile rock screener that can be easily maneuvered around quarries and which features an invention called SmartScreen TM, the first truly intelligent mobile screen in the marketplace. A screen is a device that sorts out rocks and minerals by size.

Another area of the industry in which Metso Minerals has established a leading role is wear protection, which is a common problem in rock-crushing and in mining. The company’s wear-protection products are marketed under the Trellex name, including the Trellex Poly-Clean panels, which are manufactured using abrasion-resistant polyurethane profiles.

Another area that is becoming an increasingly important part of the business is recycling. Metso Minerals is a leading supplier worldwide of recycling equipment under the Lindemann brand name for size reduction, compaction, sorting and separation of metal scrap and residues discarded by industry, trade and households. The company, through its Dynapac line, is also active in the area of removing, recycling, as well as compacting and paving highway materials.

“When a freeway gets redone, our company markets and sells much of the equipment that breaks up the freeway and reprocesses the concrete and asphalt and some of that material can be recycled and re-used in the reconstruction of the new road,” Stolowski said.

Indeed, the American operation of Metso Minerals has a lot riding on the future of federal highway construction. Stolowski said the company has played an active role in lobbying the U.S. Congress for a new federal transportation bill that would allocate a whopping $250 billion for highway projects over a five-year period, to be divided among the 50 states according to their need. He said the measure is currently in limbo but that lobbyists are optimistic the bill will become law in 2004.

There are other ways that Metso Minerals has been able to parlay its industry leadership into new business opportunities. One is the Milwaukee-based Applications Center, which works on solutions to specific problems posed by its customers. “We’re the only manufacturer in the industry who offers this,” Stolowski said. “If somebody in North Carolina wants North Carolina half-inch stone to state spec they can ship 55-gallon drums or truckload shipments to us. We can then process the material and run it through our crushing circuit at the application center and as a result are able to provide the data that the customer is looking for.”

Like many heavy industries, the demand for rock-crushing and mining equipment tends to be cyclical. Stolowski said that the recent worldwide jump in gold prices has meant an increased demand for mining equipment in that area, but many other key sectors have slumped with the overall economy.

“Typically, if somebody did a chart, they’d see an average of seven-year cycles – there’ll be seven years of downward activity, and then seven years of moderate to great activity,” Stolowski said. The good news is that the down cycle seems to be ending and the up cycle is just beginning – giving a landmark company with a new name a head start on a new century.