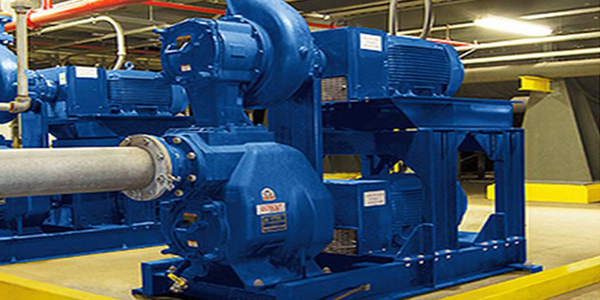 Early in February, The Gorman-Rupp Company announced that it had broken its records for annual sales and earnings for the 14th consecutive year. On 2000 sales of more than $190.1 million, the manufacturer of pumps and fluid-control products reported net income of $13.8 million.

Among the happiest people in regard to these results were Gorman-Rupp’s shareholders. The company’s earnings per share rose to $1.61 in 2000 from $1.52 in 1999. Better yet, 2000 marked the 28th consecutive year that the company was able to pay increased cash dividends to the shareholders. That’s what you call results.

Not even the New York Yankees, the Boston Celtics or the Montreal Canadiens could boast a winning string like this. Even more impressive, Gorman-Rupp has accomplished impressive year-over-year financial results while operating in one of the most competitive industrial markets in the world. As noted in the company’s 10-K filing with the Securities and Exchange Commission, an estimated 80 other pump producers market their products in one or more of the industries and applications in which Gorman-Rupp competes. Consolidation is a not-uncommon occurrence in this industry.

Flow of Business
In the face of this environment, Gorman-Rupp has not backed down. Through its divisions – Gorman-Rupp Industries, Gorman-Rupp International Company, Gorman-Rupp Mansfield, Gorman-Rupp of Canada, IPC Pumps and Patterson Pump Company – Gorman-Rupp sells a comprehensive line of pumps and related fluid-control equipment. Its products range in size from 1/4 inch to 84 inches, and have rated capacities of from 1 gallon per minute to 500,000 gallons per minute. The product line also includes packaged lift stations and booster stations, which include pumps, motors, controls, piping, accessories and enclosures. As of Dec. 31, 2000, Gorman-Rupp had an order backlog of about $74.1 million, up from $59.6 million on the same date in the previous year.

Gorman-Rupp markets its products in the United States and Canada through a network consisting of approximately 1,000 distributors, manufacturers’ representatives and a direct-sales force. The company targets its smaller-sized pumps to manufacturers of X-ray processing equipment; gas air-conditioning equipment; office copy machines; machinery for chemical feeding, instrumentation and ice cube making; photographic processing products; soft-drink dispensing equipment; laser cooling products; graphic-arts equipment; and floor-cleaning equipment. Its larger pumps are sold to customers in the construction, general industrial, sewage and waste-handling markets; they also have applications in raising low water pressure in homes, in pumping refined petroleum products (such as the refueling of aircraft), in agriculture and in fire fighting.

Government agencies (which the company pursues through its direct-sales area) and export constitute major pieces of Gorman-Rupp’s customer base. The international side has made great strides in the past five years, with the opening of sales offices that gave the company access to markets in Asia, the Middle East and Europe. Gorman-Rupp International and a network of international distributors and representatives handle the lion’s share of the global business. However, other company divisions have become involved in the international market as well. In 1998, Patterson Pump’s majority-owned subsidiary, Patterson Pump Ireland Limited, began its assembly operation in County Westmeath. The following year, Gorman-Rupp Mansfield opened a warehouse in Grindstead, Denmark, which services the European and Middle Eastern markets.

In 2000, Gorman-Rupp’s international sales jumped 22 percent over the previous year’s level, and the company cited this boost as a prime reason for its overall success last year. About 19 percent of Gorman-Rupp’s 2000 sales came from abroad, up from 17 percent in 1999 and 16 percent in 1998.

Gorman-Rupp’s management remains in the hands of the Gorman family. James C. Gorman has been the firm’s chairman since 1989; he served as president from 1964 until taking the chairman’s post, and was chief executive officer from 1964 until 1996. The current president and CEO is his son, Jeffrey S. Gorman, having been elected to both positions in 1998. The younger Gorman has been with the company since 1982 in a variety of posts, such as assistant general manager and general manager of Gorman-Rupp Mansfield and senior vice president of the parent company.

Judging from the financial results from the first two quarters of 2001, Gorman-Rupp is continuing its winning ways. The company again broke records for first- and second-quarter sales – $49.7 million in the earlier period, $54.8 million in the later period. Sales of engineered pumps to the municipal market, through Gorman-Rupp Mansfield, have served as a prime driver to the increases in both quarters.

This division has provided further juice to the business with its introduction of the Super T Series(tm) of pumps, designed to handle solids-laden liquids and slurries. These pumps feature a large volute design that allows them to reprime automatically in a completely open system, without the need for suction or discharge check valves. The series also includes an external shimless adjustment design, which doubles the life of the impeller and maximizes the pumps’ overall efficiency.

In June, the Cleveland Plain Dealer, Ohio’s most respected daily newspaper, included Gorman-Rupp on the Plain Dealer 100, its list of the 100 top public companies in Ohio. Gorman-Rupp was one of about 40 manufacturers included on this roll of honor. Even as the economy as a whole slows, Gorman-Rupp seems assured of topping even more company records down the road, especially with the added environmental concerns over wastewater treatment and management.